A law signed by Gov. Tom Wolf earlier this month targets those who ride ATVs and dirt bikes on highways, sidewalks and other public roadways 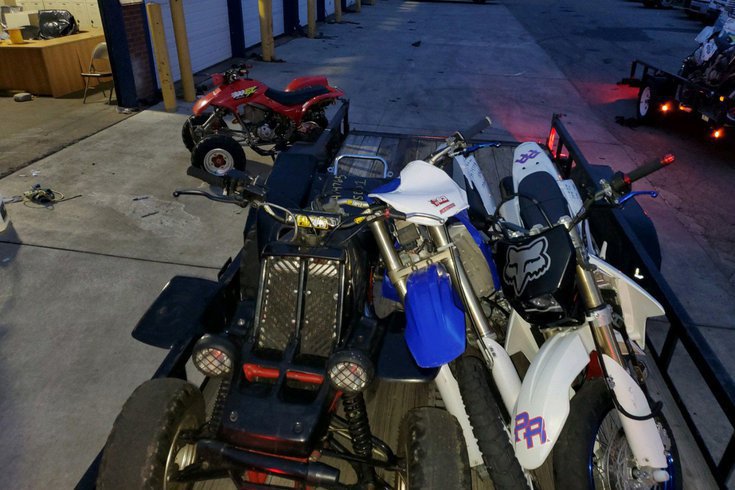 As municipal police throughout Pennsylvania continue to crack down on the use of illegal ATVs and dirt bikes, Gov. Tom Wolf signed a bill to allow police to confiscate, destroy or potentially sell vehicles found on highways, sidewalks, and other public streets.

Police in Pennsylvania can now confiscate, destroy, or sell illegal ATVs and dirt bikes on highways, sidewalks, and other public roadways, according to a new law signed by Gov. Tom Wolf earlier this month.

The legislation, sponsored by Lehigh County Sen. Pat Browne, comes following calls from lawmakers to enhance penalties for the use of ATVs and dirt bikes on public roads. The law specifically covers first, second and third-class cities and boroughs throughout the state, including Philadelphia, Pittsburgh, Allentown, Bethlehem, and Easton, among others.

"We have seen countless incidences of property being destroyed, injuries to pedestrians and the tragic loss of life of innocent bystanders due to these reckless actions," said Browne. "I want to thank my colleagues in the senate for their support to give law enforcement the tools necessary to keep these vehicles off the street."

The only state senators who opposed Browne's measure in June were Sen. Nikil Saval, a Democrat who serves Philadelphia, and Sen. Michele Brooks, a Republican who serves Erie County.

Prior to the bill being signed, the penalty for riding an ATV or dirt bike on a public roadway in Pennsylvania was a summary offense, which Browne said was not strong enough to deter people from riding the vehicles on busy roadways.

In addition to allowing police to confiscate dirt bikes and ATVs, the new law issues up to $300 in fines for those found riding the vehicles on public roads.

Though the bill originally intended to apply only to third-class cities and boroughs like Allentown, the Senate amended the bill in June to include first and second class cities.

Philadelphia is the state's only first-class city. Some communities in Philadelphia view ATV and dirt bike riding as a major part of city culture, while others view it as a nuisance. It is currently illegal to operate the vehicles on city streets, and each summer, police work to take as many vehicles off city street as possible in order to avoid crashes or other potentially dangerous incidents.

Last summer, 21-year-old Angel Rodriguez was killed while riding his dirt bike in Port Richmond. The incident quickly drew the attention of residents and city officials, many who believe that ATVs and dirt bikes are a dangerous and noisy nuisance on roadways throughout the city.

Mayor Tuerk, along with local & state leaders, celebrated @GovernorTomWolf signing @SenatorBrowne's dirt bike legislation into law! It will make it easier for police to get illegal dirt bikes & ATVs off the streets and issue fines up to $300. The law will take effect in 60 days. pic.twitter.com/xcNuuqfzDb

As a response, District Attorney Larry Krasner argued that while police should deter serious criminal behavior, they should be careful not to stereotype those who participate in the culture, particularly those who are not riding dirt bikes on sidewalks or major roadways.

"There is a big difference between driving a vehicle down the street and endangering people by driving up and down a sidewalk," Krasner said in June 2021. "There's a difference between traveling at a normal speed and going at an extremely high speed, or going against traffic, or blowing through traffic lights. We have to be willing to see those distinctions if we're not going to fall into some of our old traps."