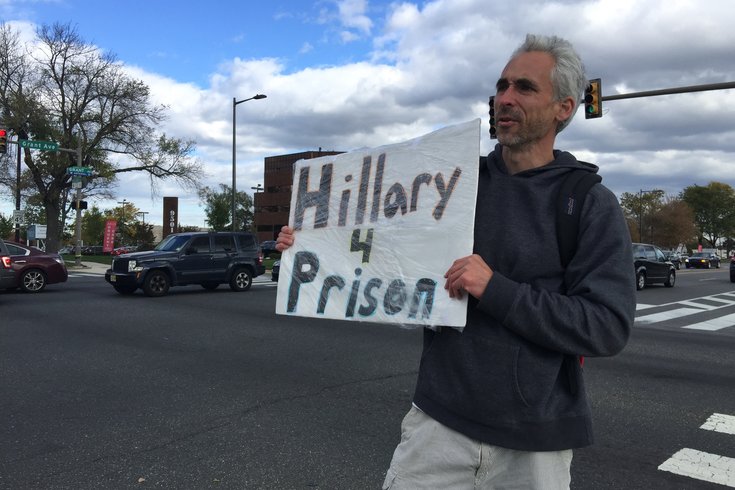 Howard Caplan, 47, of Northeast Philadelphia, has taken to the intersection of Grant Avenue and Roosevelt Boulevard to let people know he won't be supporting Hillary Clinton in the presidential election.

Howard Caplan, a 47-year-old from Northeast Philadelphia who identifies as a life-long Democrat, doesn’t much like Hillary Clinton.

He admits that he never really has – dating back to her Arkansas days, that beef helps explain his vote for Bernie Sanders in April’s Democratic Party primary – but the private email server and controversy over deleted correspondences really set him off.

So, for the past week-and-a-half, Caplan (aka Twitter user @Deplorable4Life who suspects he’s been “shadow banned” on the social-media platform) has pedaled his bicycle to the intersection of Grant Avenue and Roosevelt Boulevard most afternoons. There, he has become an attention-grabbing anti-Hillary force during the afternoon rush hour.

Hoisting a sign that reads “Hillary 4 Prison” on one side and “Wikileaks Podesta Emails” on the other, he walks along the median, in the crosswalks and into the street itself, fielding thumbs ups and honks from some and oft-profane opposition from others.

“If she steals this election, they don’t realize what’s going to happen. People will be storming the streets in every part of the country.” – Howard Caplan

An admitted conspiracy theorist, Caplan said he’ll keep up the effort as many days as possible through the November 8 election.

He’ll worry about finding work later; getting his message to as many eyes as possible is more important.

Caplan said he went to Clinton’s rally at the University of Pennsylvania last weekend and yelled “you’re going to prison” during a lull in the program.

“If she wins, I need to get the f--- out of here,” he said at the busy intersection on Tuesday afternoon. “If she steals this election, they don’t realize what’s going to happen. People will be storming the streets in every part of the country.”

To be sure, many passersby interacted with Caplan.

There were many waves and honks of support including a few from SEPTA drivers and one 60-something white man who rolled down his window to say, “That sick b**** can go to hell and burn there. Sick b****, that w***e. Have a nice day.”

Said Caplan moments after that happened, “You can’t tell me she’s winning in Pennsylvania after seeing this. She’s getting steamrolled.”

There were also many vocal criticisms. They included:

• A preteen boy giving him the middle finger as his father did the same from the driver’s seat.

• A man getting out of the passenger-side door to scream that he should “Get a job, a*****e.” He said this as he held his hand to his head in the form of a gun.

• “Two people told me they hoped I’d get hit by a car. You’re worried about how Donald Trump talks and you wish someone gets hit by a car? Really nice.”

• Many “f*** Trump” shouts, despite no signage indicating that Caplan supports Trump (“I could be voting for [Green Party candidate] Jill Stein for all they know,” said Caplan, who lets the f-word taunts roll off his back.)

If what he sees and hears qualifies as a polling sample, he claimed about 95 percent of the people support his effort (though observing it for an hour on Tuesday, it seemed closer to 60/40.)

Caplan, who quickly paces and fist-pumps despite a nagging hernia that he has to “push back in” at a nearby gas station’s bathroom during breaks in the action, chalked that up to people being scared to make themselves heard in public. 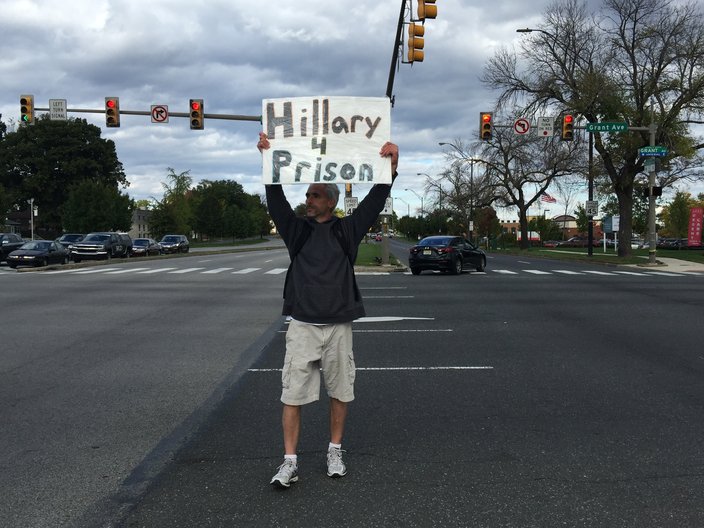 Though he identified himself as a lifelong Democrat, the Wikileaks issue inspired 47-year-old Howard Caplan of Northeast Philadelphia to make a daily trip to Grant Avenue and Roosevelt Boulevard to express his displeasure with Hillary Clinton's candidacy.

As for his ultimate mission, he said it’s to educate people in the tens of thousands of cars that pass his soapbox.

“People say I’m crazy, but I’m just a guy with a sign saying what people are thinking,” he said. “There’s nothing crazy about me.”