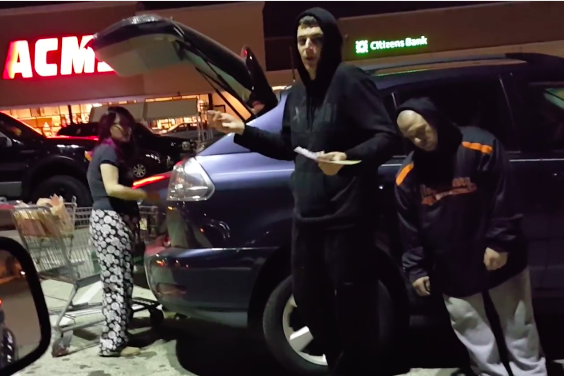 In a web video that made the rounds nationally, three people outside a Northeast Philly supermarket were confronted by a passerby about welfare fraud. It was widely mistaken for reality when it was merely comedy.

When you’re trying to make it as an online comedian, tapping into the anonymous-commenter mentality of hoagie-mouthed offensiveness is one first step to take.

The vloggy aspects of August’s HitchBOT debacle proved that, and so too do the works of Jay Jay McGuire, a man with Tacony roots who pulled a fast one on much of the Internet last week.

He’s the proprietor of “The Philly Offensive,” a Facebook/YouTube-based outfit that not only lives up to its birth name, but curb stomps any semblance of propriety.

NSFW tags often don’t go far enough to properly warn people of what they’ll see and hear in his 50-plus video collection. Which is to say: a) ain’t no way we’re embedding the profanely crass videos within this post and b) YOU ACCEPT ALL RESPONSIBILITY SHOULD YOU CLICK ANY HYPERLINK HEREIN. (Bold and caps used to forcibly reiterate this point.)

McGuire has seemingly tapped into that unsweet spot between the ignorance of questioning the motives of a homeless man using a dog for sympathy and web-comedy entertainment.

Now, let's get to the reason for this post.

The best we can do is describe the skit recently shot outside the Acme at Harbison Avenue and Roosevelt Boulevard that garnered attention from such sites as World Star Hip Hop, LiveLeak, AddictingInfo and BroBible.

In it, McGuire rolls up on “one of those situations … that ain’t even funny,” that being a trio of folks who he chides with, among other slights, the question “Why are you using a welfare card to buy food but then you’re buying scratch-off lottery tickets with cash?”

Two of the three – a pregnant, pajama-sporting woman smoking a cigarette and a dude holding the "lottery tickets" – fire back in a “mind your own business” sense while their doped-up friend seemingly falls out while leaning against their reasonably nice car.

To that, McGuire retorts that, as a working taxpayer, it is his business – see the allusion to anonymous commenters now? — so he approaches them and swipes a steak out of their grocery bag.

“Steak is for f------ taxpayers,” he says as the 1:20 video comes to a conclusion, a phrase that now adorns T-shirts through which others are trying to cash in on his infamy.

As expected in our rush-to-judgment times, the blowback was swift and severe, as one could argue it should be for someone who engages in nonfictional welfare shaming. (The trio was actually Philly Offensive fans who drove up from Delaware to participate).

One site broke down how much the average American taxpayer funds food stamps annually ($36 a year for someone who makes $50,000.) The video was removed from the sites due to reported complaints, and McGuire had to post anew with a caveat that it was “STAGED COMEDY!!!!!! ALL PARTICIPANTS ARE ACTORS!!!!!!!!! welfare fraud."

It got to the point where the welfare-shaming reaction to the video – which drew millions of hits (and death threats to McGuire) within the first two days after it went live – warranted a Huffington Post story stating that the whole thing was, in fact, staged. 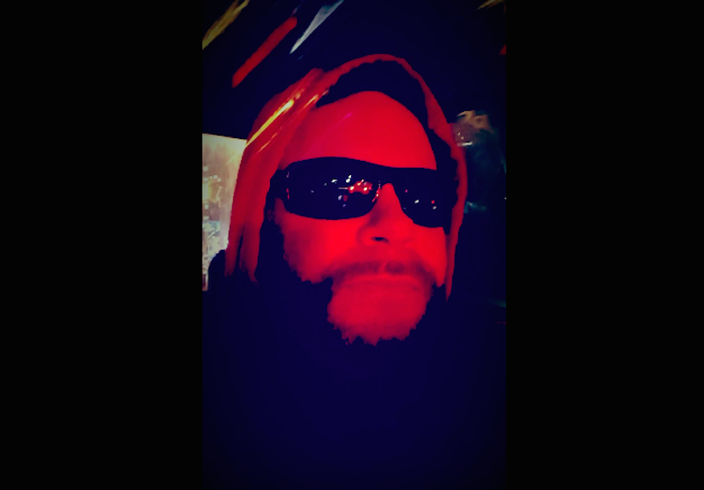 McGuire got a real kick out that. He also posted a follow-up profanity-laced “Why I made the steak is for taxpayers video” which further cemented the offensive tone.

Speaking with PhillyVoice a couple days later, he noted that the dynamic he parodied does, in fact, infuriate him. As with many of the videos he’s posted before, the 39-year-old union laborer relies on moments of real-life offensiveness to guide his work.

It’s comedy with a wee bit of reality driving it forward in a darkly offensive ways and it draws attention to the tune of 72,000 Facebook followers and tens of thousands of shares on the regular, with the bigger posts hitting the millions.

McGuire has seemingly tapped into that unsweet spot between the ignorance of questioning the motives of a homeless man using a dog for sympathy and entertainment. It begs the question: What is the line of offensiveness in a society already fraying at its edges?

This web series started three years ago when McGuire and a friend launched a “Tacony Offensive” page where, in lieu of videos, we “just started posting offensive s---.” Within a year, he said there were 10,000 followers, but the friend dropped out, so he changed it to the “Philly Offensive,” started integrating the videos and the hits, fans and nasty comments just started pouring in.

It's not exactly the most profitable of ventures, though: McGuire recently received a $200 check from YouTube for his efforts there. That hasn't stopped him from stepping up efforts with an eye on the future, though.

“When it started, I was talking s--- about people, but last year, someone stole my girl’s photo and started making memes with it. Well, I got pretty p----- off and told them to meet me at the gym,” he recounted in true “Meet me in Temecula” form. “I was waiting for the dudes, but they never showed up. Good thing they didn’t. I could have gotten shot or ended up in jail.

“It’s my name and my face out there, so people know who I am. My name gets associated with fighting all the time. Twenty people a week want to fight. If someone threatens me, I’ll f--- with them in a video or post, but not physically.”

McGuire conceded that the videos aren’t explicitly designed to offend, but to just get “things that bother me” off his chest.

“I act like a complete jerk off, but pretend that I don’t know I am,” he said. “I saw someone do that [food with welfare card and pay cash for lottery] in a story though and it p----- me off. Half of the things are things that bother me and half I think would just be funny, like the ‘Junky Neighbor’ character.”

There’s a simple guiding principle involved here, said McGuire, who readily admits to a past that involves drug addiction and doing whippets while driving: If he sees something that angers him or his followers, he’ll double down.

“If I post about something, like Cowboys fans in Philly, and see it gets a bunch of hits quickly, I take it even further and do a video,” he said. “My followers enjoy and relate to my anger.”

As for the future, he hopes to parlay the burgeoning Philly Offensive success into something bigger.

“I’d like the attention of someone who could give me my own show, or to write for someone else’s show,” he said. “Obviously, if you’re talking about any light at [the] end of the tunnel, any comic wants to get noticed, so that'd be nice.”