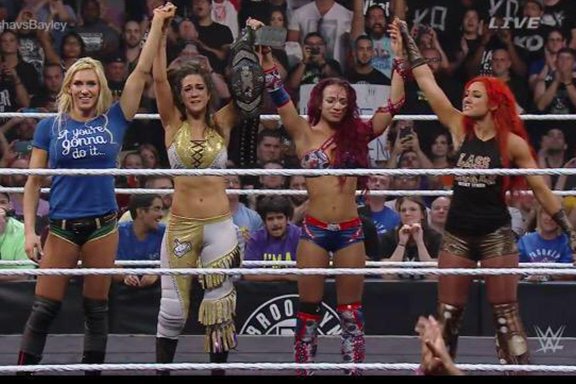 Bayley and Sasha Banks competed in a classic match on Saturday night in Brooklyn.

The way WWE was hyping this NXT Takeover: Brooklyn show, one would think they expected this to be the young promotion’s WrestleMania show.

And after witnessing two and a half hours of some of the best wrestling on the planet, it certainly seemed like it was their WrestleMania.

From an amazing NXT Women’s title match to a fantastic Ladder Match main event for the NXT title, to new NXT Tag Team Champions and an appearance by Jushin “Thunder” Liger for the first time ever in a WWE ring, the NXT Takeover: Brooklyn event on Saturday night sure left fans clamoring for more when it was all said and done.

This was perhaps the best event top to bottom NXT has put on to date, and it included one of the best matches I’ve ever had the pleasure of seeing. The night before SummerSlam in the Barclays Center, the NXT roster put the WWE main roster on notice. In front of a record 15,589 people, NXT became the present.

Here’s what happened at NXT Takeover in Brooklyn:

Liger made his WWE debut on Saturday night and made the most of it. Breeze, who has a great character in NXT, was once again fed to the dog as Liger defeated him via his patented Liger bomb in a highly entertaining opener. I didn’t think Breeze would win this one, but I’d like to think he’s closer to the main roster than he looks.

I’ve always been a fan of The Vaudevillians since their debut in NXT in May of 2014, and I felt like there was a really good chance they would walk away with the Tag Team Championships on Saturday night. The addition they brought helped further that notion for me.

Alexa got on the mic before the match and taunted both English and Gotch for not having anyone in their corner before they conveniently introduced Blue Pants to a huge crowd reaction. Blue Pants has appeared on NXT programming before but hasn’t been used regularly, but she is wildly popular in the independent wrestling scene, so this was really awesome for the New York crowd and the audience at home watching to see.

Of course, the women would play a part in the ending of the match, as Alexa would try to interfere, but Blue Pants would prevent that from happening. Due to the distraction, Murphy rolled up English in what looked like would be the end of the match, but Gotch broke it up and the duo hit The Whirling Dervish on Murphy for the win.

Your winners and NEW NXT Tag Team Champions: The Vaudevillians

Crews is making his NXT debut, coming from the independent wrestling scene as Uhaa Nation. Crews has been in the WWE developmental system since last October, so you can bet he was amped to finally make his debut in Brooklyn.

What an impressive maneuver by @ApolloCrews to notch his first victory in @WWENXT! #NXTTakeOver #HappyBirthdayApollo pic.twitter.com/DgYW1hFJng

Crews looked really impressive for a big, powerful guy and showed awesome athleticism. He pinned Dillinger after hitting him with a standing moonsault, something I can only dream of doing on a trampoline.

After the match, NXT Commissioner, William Regal, announced backstage that NXT will be starting a Dusty Rhodes Tag Team Classic tournament to begin on the September 2nd episode of NXT television, and the finals would be held during the next Takeover event scheduled for October 7th. That day is my birthday, so I’ll be celebrating by watching the finals of this prestigious tournament.

Since Joe’s debut in NXT, he’s been feuding mainly with Corbin, which is fine if you like the big, tough guy vs. the other big, tough guy. Joe is probably due for a heel turn, I would imagine, or NXT would be smart to have him and Finn Bálor begin a feud for the NXT Championship. Those are some matches I would love to see.

Let’s not forget about Hideo Itami, either. He’ll be returning to action by late October-early November, and he’ll be in the World Title picture for sure.

Though, I’m probably getting ahead of myself. This match was good for what it was, and the ending was fantastic. Corbin went for his finisher, but Joe locked on the Coquina Clutch submission finisher, and wouldn’t relent. Corbin tried to reverse it into a powerbomb, but Joe locked the Clutch in even more and made Corbin pass out.

When Corbin came to, he had no clue what happened. I swear these kids have better acting skills than a majority of wrestlers on the main roster. Great stuff.

Stephanie McMahon came out and talked about the Divas Revolution that she started on Raw a month ago. I don’t even care if she’s going to bask in the glory of it since it has meant for a renaissance in the Divas division and the match to follow did not disappoint.

Bayley wore a polka dotted headband to honor one of her mentors, the late “American Dream” Dusty Rhodes. The champion, Sasha Banks, entered via a Cadillac Escalade with a four-person entourage as security.

This match was without a doubt one of the best matches I’ve ever seen, and I’ll argue with anyone who doesn’t think it was worthy of a Match of the Year candidate. This match had everything: high-flying spots, great ring psychology, near falls, and emotions abound for not only the audience but both of the competitors in the ring.

The crowd began its dueling chants for each wrestler, and I didn’t even mind that. Usually I don’t care either way, but Banks and Bayley are both so over that even though Banks is acting as the heel in this match, we can’t help but cheer for her for the amount of hard work she’s done not only in this particular match, but in her career to this point.

From Banks’ double knees from the top rope to Bayley’s reverse FrankenBayley off the top rope, I caught myself verbally cheering for the end of this match, which I don’t normally do for any match. That’s how amazing this match and this finish was. Bayley hit her patented Bayley-to-Belly suplex after the FrankenBayley and pinned Banks to end one of the greatest matches, possibly ever.

After the match, Charlotte and Becky Lynch ran into the ring while Bayley was celebrating, and the trio hugged and had an emotional moment together. Banks came in to join the party and all four of them hugged and posed with the Four Horsewomen symbol. Sure looks a lot like the infamous Madison Square Garden Curtain Call involving the Kliq, so we’ll call this the Curtain Call v. 2.0.

Ladder Match for the NXT Championship

Who would’ve thought that these guys would be in an unenvious position following the NXT Women’s Championship match? Honestly, it was hard to get emotionally invested in this match due to the women’s match, but Bálor and Owens really gave us a good main event to not feel cheated a bit.

The match was good in terms of psychology, and when Owens hit Bálor with a powerbomb on the ring apron, it brought back memories of him doing it to Sami Zayn and John Cena and I cringed a little bit. He then powerbombed Bálor off the ladder, which was a pretty good moment for people to believe Owens might actually climb the ladder and regain the title.

While I didn’t think Owens would regain the NXT Championship due to his main roster status, I didn’t think Balor’s win would be as telegraphed as it was. The moment took time to build, as Balor flirted with trying to get the championship belt suspended high above the ring from a slightly off-centered ladder, but decided to give a fallen Owens one last Coup de Grace. Bálor is either a really good seller or he legitimately hurt his ankle, because he grabbed for it right away. He was able to climb the ladder, however, and grab his title to win the match.

This was without a doubt one of the best, if not the best, NXT events the promotion has ever put on for wrestling fans. The Bayley/Banks match was one of the best I’ve ever seen, and I’m not using hyperbole when I say that. There wasn’t one bad match and the crowd really made this show feel as big as it was.

SummerSlam on Sunday night will have a hell of a time trying to top this show. But that’s what’s making wrestling today so great. Instead of the brand extension between Raw and SmackDown, we have WWE vs. NXT in a match of who can top who. It’s a great time to be a wrestling fan.