Obama pushes Latin America on rights as he courts Cuba 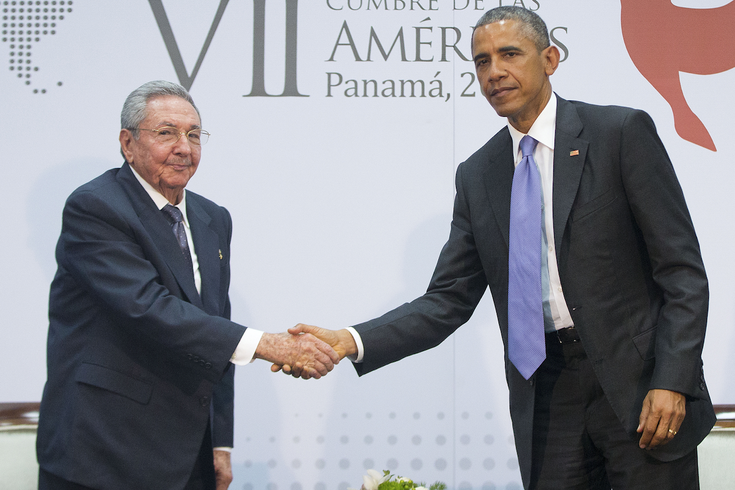 US President Barack Obama and Cuban President Raul Castro shake hands during their meeting at the Summit of the Americas in Panama City, Panama, Saturday, April 11, 2015.

PANAMA CITY - U.S. President Barack Obama met Cuban President Raul Castro on Saturday in the highest-level talks between the two countries in nearly 60 years, and the two men agreed to push ahead on improving relations after decades of hostility.

Describing their private meeting as "historic," Obama said the two countries can end the antagonism of the Cold War era, although he also said he would continue to pressure the communist-led country on democracy and its human rights record.
"We are now in a position to move on a path toward the future," Obama told Castro as they met in Panama, where they were both attending a summit of leaders from across the Americas.
Obama said there would still be "deep and significant differences" between the two governments and that he would continue to raise concerns on democracy and human rights in Cuba, while Castro will criticize U.S. policies.
"But I think what we have both concluded is that we can disagree with the spirit of respect and civility, and that over time it is possible for us to turn the page and develop a new relationship in our two countries."
EARLIER STORY: Obama, Castro shake hands as U.S., Cuba seek better ties
The two men agreed in December to move to normalize relations, including seeking to restore diplomatic ties that were broken off by Washington in 1961.
Obama said he decided to overturn longstanding U.S. policy on Cuba because the old approach of open hostility and economic sanctions had failed to force through major changes on the island and it was time to try something new.
Since then, he has relaxed some restrictions on travel and trade with Cuba.
At their meeting on Saturday, Obama and Castro sat side by side in polished, wooden chairs in a small conference room. The mood cordial but businesslike.
Both wore dark suits and each nodded and smiled at some of the comments made by the other in brief statements to reporters before they began their talks.
Castro said he would continue to take steps toward normalizing relations with Washington, and was open to discussing human rights and other issues.
"So we are willing to discuss everything, but we need to be patient, very patient. Some things we will agree on; others we will disagree," said the 83-year-old leader, who took over as president of Cuba in 2008 when his older brother, Fidel Castro, stepped aside because of ill health.

Raul Castro has already undertaken some market-style reforms to try to strengthen Cuba's economy but he is moving cautiously and he has made clear that he has no intention of allowing an end to communist rule.
The last time the leaders of the two countries held a substantive meeting was in 1956, when Dwight Eisenhower was U.S. president and Fulgencio Batista was the U.S.-backed dictator in power in Havana. That meeting was also in Panama.
The Castro brothers toppled Batista in a revolution on January 1, 1959 and relations between the United States and Cuba quickly deteriorated.
Fidel Castro became a Cold War ally of the Soviet Union and the rivalries took the world to the brink of a nuclear war during the Cuban Missile Crisis in October, 1962.
Now that relations are improving, Obama is close to removing Cuba from a U.S. list of countries that it says sponsor terrorism.
A senior U.S. official said Obama will make his decision in coming days and that efforts to reopen Cuban and U.S. embassies should be concluded relatively quickly.
Since 1977, the two countries have maintained contact through interests sections in Havana and Washington and in recent years they have cooperated on migration, drug trafficking and other issues.
Castro's government has called Cuba's inclusion on the state terrorism list a hindrance to restoring diplomatic ties.
Cuba was first placed on the list in 1982 when it supported Marxist rebellions in Latin America but that backing stopped with the end of the Cold War. The only other countries currently on the list are Iran, Syria and Sudan.
Obama, a Democrat, has faced some criticism inside the U.S. Congress for his dramatic shift on Cuba policy. Critics say he has given up too much without first insisting on political reform on the island.
The U.S. president can continue to ease specific sanctions but the trade embargo against the island can be overturned only by the Republican-controlled Congress.
Relations between the United States and Cuba deteriorated rapidly after Fidel Castro and his rebel army drove out U.S.-backed dictator Fulgencio Batista in January 1959. The island soon steered leftward and forged a close alliance with the Soviet Union.
The highest-level U.S.-Cuba meeting after the revolution took place in April 1959, between then-Vice President Richard Nixon and Fidel Castro, who was Cuba's prime minister at the time.

President Obama also challenged Latin American leaders on Saturday to improve human rights and democracy throughout the region.
Obama has won praise across much of Latin America for seeking to restore diplomatic relations with Cuba, but he took a tougher line on Saturday in a speech at the Summit of the Americas in Panama.
"I believe our governments together have an obligation to uphold the universal freedoms and rights of all our citizens," Obama told other leaders from across the Americas. "The voices of our citizens must be heard."
Responding to other leaders' criticism of past U.S. policy in Latin America, including its support of military coups and dictatorships during the Cold War, Obama said Washington's  record was far from perfect but that it has changed and he would continue to push for greater democracy.
"I just want to make very clear that when we speak out on something like human rights, it's not because we think we are perfect but it is because we think the idea of not jailing people if they disagree with you is the right idea," Obama said.
Waving his hands for emphasis, Castro condemned the United States for its attempts to topple communist rule on the island but he praised Obama as "an honest man" and said he was not to blame for U.S. policies during the Cold War.
"I apologize to President Obama, because he is not responsible for any of this," the 83-year-old Castro said.