On road to Jersey Shore, motorists slowing for another reason: pink flamingos

Bamboo Jerry is turning heads with his fast-growing roadside attraction, and more is planned 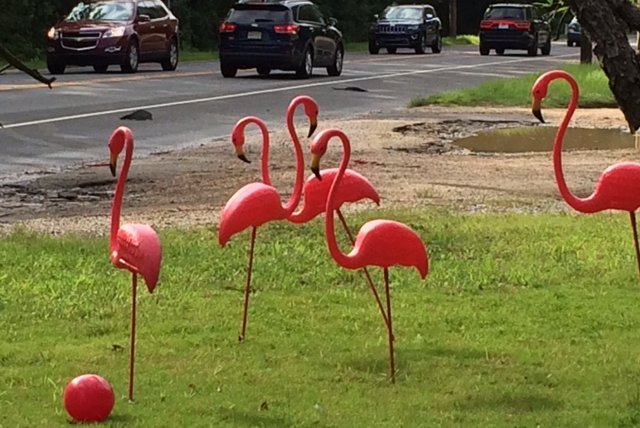 Bustling Route 47, in Port Elizabeth, on the way to the Jersey Shore, has a new roadside attraction: a 'flock' of pink plastic flamingos.

The blue highways leading to the Jersey Shore are littered with offbeat roadside attractions.

Oversized concrete Champagne bottles. Storybook Land, the hand-crafted amusement park. The hubcap pyramid. And a Quonset hut that doubled as a bar. Just to name a few.

Still, the pink flamingos on Delsea Drive, which runs all the way from Brooklawn in Camden County to Wildwood in Cape May County, threw motorists for a loop when they showed up along the roadway a few weeks ago.

And not just anywhere on Delsea Drive, which is also known as Route 47.

No, the oversized pink flamingos came home to roost at the intersection of Route 55 and Delsea Drive, a highway-to-hell bottleneck on the road that runs from the Delaware River – Del — to the Atlantic Ocean – sea.

The road is jammed by thousands of Shore-bound travelers on a summer weekend, especially in the rural area known as the Port Elizabeth section of Maurice River Township, where Routes 47 and 55 converge and traffic comes to a standstill even on good days.

The flamingos are not alone alongside the highway, though.

Scattered amid them are clusters of balls, as if the birds had laid eggs beneath the boughs of a toppled pine tree.

Nearby, there’s an artful display of interlaced bamboo, with a silvered pair of mannequins in the center and a sign warning of video surveillance. A floodlight illuminates the couple at night.

There's also a small Zen garden nearby, tucked back away from the road.

And a rack where small sections of bamboo are free for the taking.

Clusters of red, white and blue balls appeared beneath the broken tree, evidently to celebrate the Fourth of July. The growing tableau of flamingos began when a pine tree toppled back in June.

Oh, and gold hoops were hung from the fallen tree.

Replacement balls in different colors showed up next.

Then more flamingos joined them the next day.

Jerry McShane, who runs Cape May Bamboo at the intersection, made the installations. A company sign is mixed in with the tableau.

“It sure gives drivers something to look at. They slow down out of curiosity. I slow down myself and I pass by it every day,” said Anita Flores, a waitress.

The site is soon to get even funkier, according to McShane, who signs himself "Bamboo Jerry."

According to an email from McShane, who said he is traveling, the flamingos will soon get new 7-foot-tall legs of bamboo. "Think Salvador Dali :-)" he wrote.

"We've become accustomed to folks regularly pulling over and taking photos and wandering around." he wrote in an email. "Locals, tourists, professional photographers, artists, architects, a wedding photos party(!)"

"One very early morning, through a soft fog, I spied three Asian ladies posing in the area we call the yoga room... " he continued, "but wait, there's no photographer anywhere and they are ... in slow motion? Ah! Tai chi! I realized. Made me giggle and warmed my heart."

McShane's company does all things bamboo.

In addition to growing it, he'll use it to install a privacy hedge, or build a gazebo, bridge or sculpture. He'll even eradicate – with a lifetime guarantee – an unwanted grove of the giant woody grass.

Bamboo Jerry promised more interesting bamboo visuals are on the way to the garden, including a big dragon head for the toppled tree, a levitating "clouds" aerial sculpture, a "bamboo haiku" trail and more "Alice-in-bamboo-Wonderland objects."

Cool as McShane's plans sound, the reason and meaning behind the flamingo display really doesn’t matter in the end. After all, as Tom Robbins, author of the book “Another Roadside Attraction," reminds us, “The purpose of art is to provide what life does not.”

Perhaps that’s reason enough for a flock of plastic pink flamingos to have taken up residence on one of South Jersey’s blue highways.

For giraffe-like flamingos and a big bamboo dragon head.