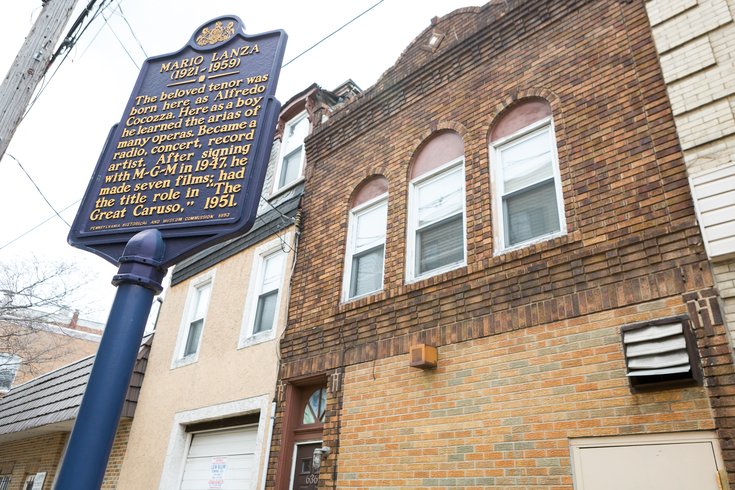 In 1921, Mario Lanza was born in an unassuming, two-floor row home at 636 Christian St.. The son of Italian immigrants, he would go on to become an international superstar as an opera singer and actor. Lanza died tragically at age 38 of a heart attack, but much like his memory lives on among his fans and their descendants, the house still stands.

"Although he died the year I was born, in the 70s and 80s he was still very relevant," said Danny Vanore, a South Philly resident who started singing professionally thanks in part to Lanza's inspiration. "He’s relevant worldwide even today."

The proposal faces fierce opposition from two seemingly odd bedfellows who want the same thing for different reasons: the local neighbors association who think the homes will cast a "shadow" over the surrounding neighborhood and the local Italian American community who wish to preserve the history Lanza's birthplace.

The proposed construction calls for combining the lots of 630-638 Christian St. and replacing the existing homes with the two buildings that include seven total apartments, as well as the driveway with 10 parking garage spaces.

The Bella Vista Neighbors Association officially opposed the proposal in a letter after an April 3 zoning meeting, arguing that such a development — with a "shared 'gated' private driveway" — is "inappropriate" for the community.

Larry Weintraub, co-chair of the association's zoning commission, explained to PhillyVoice that the proposal received automatic zoning refusals because the project is too tall and doesn't include backyards. The developer is supposed to prove that the lot's layout provides such a hardship that circumventing the zoning requirements is necessary, but Weintraub argues the developer made no attempt to prove that hardship.

"The height of the proposed structure is excessive, the lack of open space adversely affects the future dwelling residents and current neighbors, and the applicant did not demonstrate a hardship with respect to the physical conditions of the lot itself," Weintraub wrote in the association’s opposition letter.

The developer, Christian Street Acquisition LLC, acquired the properties in a sheriff's sale, according to the company's attorney, Michael Phillips. Federal court records show that in 2015 a judge ordered the previous owner, Joseph Gatta & Sons, Inc., to pay more than $3.5 million to CitiBank because Gatta & Sons failed to appear in court after CitiBank accused the company of not paying back more than $2.5 million in loans and interest.

Phillips said they are seeking a continuance for a public hearing scheduled for Wednesday in front of the Philadelphia Zoning Board of Adjustment, as they discuss possible alterations to the proposal with a neighboring condo association and resolve issues with the original blueprints of the project. But Phillips noted that the condo association has been generally supportive and said Christian Street Acquisition is still looking to move forward with the development, mostly as originally planned.

"I think it would be a good project for the neighborhood," Phillips said.

Again, Weintraub disagrees. He said Phillips admitted that they were seeking to circumvent zoning code not because doing so would be necessary to build, but because it would make the proposed houses more profitable. (Asked about this, Phillips said the variances would give them the developer the "ability to build very nice town homes and provide ample parking for those homes.")

Weintraub has other issues. He said the gated driveway would produce a "canyon" effect, isolating new tenants from the neighborhood.

"You never see these people out on the street because they drive in and disappear. It creates a dead zone," Weintraub said.

Dealing with the neighboring condo association separately, and after the one mandatory community meeting was already held, could leave other neighbors out of the process. Phillips has said he would be open to meeting with the neighbors association to discuss future changes to the plan, but if substantive alterations aren’t made, such a meeting isn’t required or guaranteed.

Resistance to the proposal isn't only concerned with the project's size and potential impact on neighbors. Jody Della Barba, former secretary to Philadelphia Mayor Frank Rizzo, has been organizing South Philly's Italian American community to try and kill the proposal.

Della Barba has become de facto spokesperson for preserving the legacy of Rizzo, and has been outspoken her calls to preserve the former mayor's Center City statue and Italian Market mural amid opponents who want both removed because of Rizzo's treatment of African Americans and the LGBTQ community, first as police commissioner and then as mayor.

She ignited controversy when she accused Councilwoman Helen Gym of being a racist because Gym wants the statue to come down.

Ensuring Lanza's house survives is shaping up to be Della Barba's next crusade.

"If need be, we're going to turn this into the same thing [as Rizzo]," said Della Barba, who summarized the Rizzo and Lanza situations as part of continued "assaults on Italian Americans."

A Pennsylvania Historical Marker was dedicated in front of Lanza's house in 1993. The Mario Lanza Institute & Museum is located just a skip and a jump away at 712 Montrose St.

Lanza, who was born Alfredo Arnold Cocozza, was hailed by one contemporary as the "greatest voice of his time." In addition to his opera recordings, he starred in several Hollywood films after signing a movie contract with MGM. Following his untimely death in 1959, thousands attended three separate funeral services in Rome, Philadelphia and Los Angeles for the singer

"My father took me to Mario Lanza's movies when I was five years old. I have all his recordings," Della Barba said.

Vanore, who leads a band called "The Business" that books various gigs in the Delaware Valley, said he knew some of Lanza's family growing up; by all accounts, Lanza was " as cool a South Philly neighborhood guy as you could be," according to Vanore.

Along with Della Barba, he is helping to organize a concert in front of Lanza's house that would serve as a protest of sorts. Della Barba also is going to reach out to the Philadelphia Historical Commission about possibly having the house designated as a historical site, she said.

A designation from the commission, unlike the state historical marker, would ensure the house could not be demolished unless the commission approved knocking it down. Della Barba admitted she doesn't know many of the people who live in the neighborhood now, and suggested teaching new residents about Lanza's story might help drum up opposition to the project.

Weintraub, for his part, is aware of the house's history and did contact the historical commission about the buildings in the lot — not only the Lanza house, but the Banca Calabrese building on the corner of the proposed development, which once was a staple of the old Italian Bankers Row. Neither are currently protected by the commission.

Phillips was very familiar with the neighbors association and Weintraub's gripes. But the coming storm of Lanza fans? That might come as a surprise.

"I wasn't aware that he was born there, that there was opposition," Phillips said.