Samir Hill did nothing wrong, unless you consider breaking ankles a form of assault 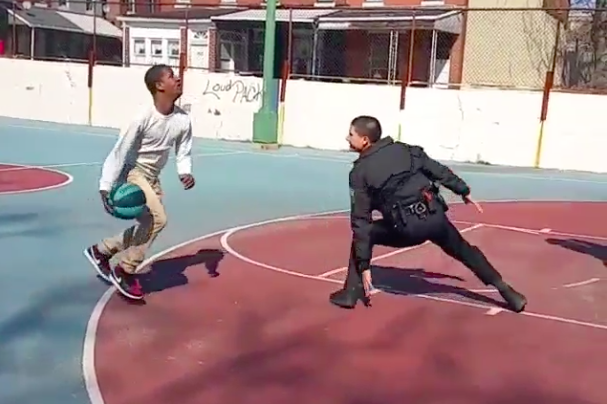 Last week, Samir Hill was just another kid from West Philly, home from college to visit his family over spring break. Because he's a basketball player -- he plays at Allegany College in Maryland -- he did what any other 21-year-old would do on a warm day: go to the nearest playground to shoot around.

What Hill didn't know was that his trip to the courts on 56th and Lansdowne would wind up making him internet famous, and ultimately land him in handcuffs.

Like a bizarro version of the "Fresh Prince" intro, Hill, who spoke at length with Complex.com, was playing two-on-two with his friend Josh and a pair of younger kids when two uniformed police officers approached and began talking smack.

"They started talking trash," Hill told Complex. "I’m like, 'Come get on the court.' They’re talking about, 'We only play for money.' I say, 'How much money y’all want to play for?' One of the cops was like, 'How much you wanna play for?' I say, 'Matter of fact, we can play for one. Game to one.'”

So the cops, not knowing that Hill played at Overbrook High, and now at the college level, took the bait. Hill said he recognized the cops from his neighborhood, but didn't know their names.

"We gave them ball first," Hill continued. "I was playing on the court 2 on 2 with my friend Josh—they almost scored on him! We get the ball, and everybody starts pulling out their cameras. The first cop, I crossed him and laid it up."

WARNING: Tweets and videos in this post may contain graphic language.

Fearing further embarrassment, the other officer began guarding Hill, and the results were no better:

This is where the story gets weird.

After the above Instagram posts went viral -- Chad Johnson, aka Chad Ochocinco, even posted it -- Hill found himself in a bit of hot water, as he was handcuffed (apparently by the same officers) and taken down to the station.

When you cross a cop over you got deal with shit like this smh same cops I cross try book a nigga today smh pic.twitter.com/16YvDd6pzk

More from Hill's interview with Complex:

I saw you post a video that appeared to show you and a friend in handcuffs, “all because of basketball.” What happened there?

I think it was because of the video, but they said it was the people I was around. I don’t think it was that though, cause most of the kids I hang around are college kids. I think they just wanted to take me down to the district to show who I was.

Did they arrest you?

They didn’t arrest me for nothing. They were talking about how they thought they saw something. I was just down there [at the police station] for an hour and a half, then they let me go.

They didn’t explain to you why they took you down?

No, they didn’t explain it to me. They just took me in there, handcuffed me to a bench for an hour and a half. They were doing a search on the car. They searched the car for like an hour. They didn’t find nothing, and they let me go. The whole time they were telling me how they weren’t gonna lock me up, that they were targeting my friend.

So your friend was in trouble, and you just happened to be riding in a car with him.

Note to self: Don't challenge cops to a game unless you plan on letting them win.

Check out the full story from Complex, here.