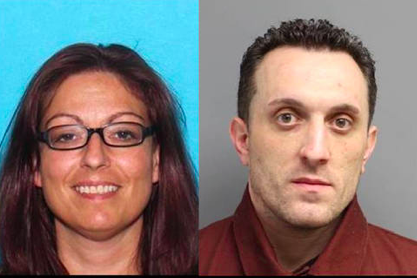 Kristin Apple-Millar, 40, of Telford, and Gregory Giuliano, 33, of Warminster.

Authorities in Wildwood Crest have filed charges against a Pennsylvania couple who allegedly broke into and burglarized a series of homes earlier this month.

Police said Gregory Giuliano, 33, and Kristen Apple-Millar, 40, both from Pennsylvania, broke into at least two Wildwood Crest homes and one commercial establishment.

On the night of Feb. 6, officials received a report of two suspects acting suspiciously behind an unoccupied residence on the 200 block of Lotus Avenue.

When police arrived at the scene, Apple-Millar was allegedly found with a crowbar and prying tools at the scene. A black Cadillac Escalade was also found in the driveway of the residence bearing stolen Pennsylvania license plates. Guiliano fled from responding officers, police said.

Further investigation revealed that two other residences on the same block had been broken into, with drugs and paraphernalia belonging to the suspects found inside one of the homes.

Giuliano was found and arrested the next day at a property in the 100 block of East Monterrey Avenue where the couple had been staying.

Background checks on both Guiliano and Apple-Millar revealed that the couple had allegedly stolen thousands of dollars in a separate theft incident in Middle Township. Authorities seized a large amount of cash from the couple and reportedly found a cash register from a nearby business at the time of their arrests, according to CBS Philly.

Both suspects also had active warrants out in Pennsylvania for multiple burglaries and thefts in Hatfield, as well as probation and parole violations.

Giuliano and Apple-Millar are charged with burglary, theft, receiving stolen property and multiple related drug offenses. Additional charges are expected as other jurisdictions connect the couple to outstanding investigations. They're both being held at the Cape May County Correctional Center.