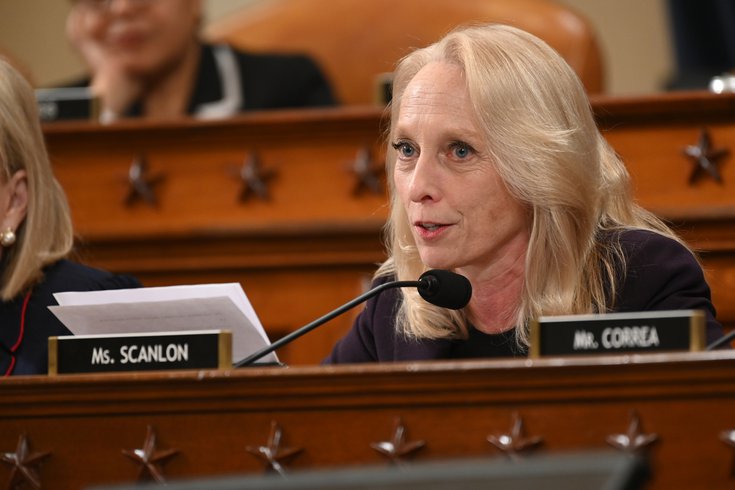 Rep. Mary Gay Scanlon became the second member of the U.S. House to say the panic button installed in her office was not functioning last week when the pro-Trump mob stormed the U.S. Capitol.

Scanlon also said that in the days before the attempted insurrection she observed people being led on tours inside the landmark Washington, D.C. building, which was unusual because of the COVID-19. Earlier this week, Rep. Mikkie Sherrill, a North Jersey Democrat, also described seeing tours inside the Capitol, and she has since become suspicious of their intent and called for an investigation.

Pennsylvania's 5th District congresswoman, a Democrat covering Delaware County and parts of Philadelphia, Chester, and Montgomery counties, recounted both incidents Thursday to reporters, according to the Delco Times.

Members of Congress reportedly have panic buttons installed in their offices, which the politicians or the staffs can use to alert police in the event of an emergency. Scanlon said hers was not operational during the Jan. 6 riots.

"Ours had not been attached," she said. "I had to locate it and plug it in … it was not connected at the time it should have been."

On Wednesday, the Boston Globe published an article including an interview with Sarah Groh, the chief of staff for Rep. Ayanna Pressley, a Democrat from Massachusetts. Groh told the Globe how she and other Pressley staffers barricaded themselves into their office, put on gas masks and searched for the panic buttons:

"Every panic button in my office had been torn out — the whole unit," (Groh) said, though they could come up with no rationale as to why. She had used them before and hadn't switched offices since then.

A Pressley spokesperson told The Hill on Wednesday that the matter is under investigation. "Our staff has used these devices before and they are regularly tested and maintained," the spokesperson said.

Scanlon and Pressley's offices are located in the Longworth House Office Building, which sits immediately south of the Capitol, across Independence Avenue.

About the tours, Scanlon said she had noticed unauthorized tours of the Capitol in the days before the attack, including a group of six or eight people who were not wearing their masks properly.

Tours of the U.S. Capitol buildings had been suspended due to the COVID-19 mitigation plans put into place last year.

"It was noticeable to see people getting tours," Scanlon said in the Delco Times. "When I saw the tours, I thought, 'It must be new members who don't know the rules yet' ... It was unusual."

New Jersey's Rep. Sherrill said she also witnessed Republican lawmakers giving what she now describes as "reconnaissance" tours inside the building the day before the attack.

She posted these claims in a Facebook live video earlier this week, and blamed Republican lawmakers for inciting the riot. She did not name any of the members of Congress who she said led these tours, but pledged to hold them accountable for their actions.

Sherrill joined a group of 30 lawmakers who have signed a letter requesting an investigation into the reported tours given before the riots.

She tweeted Wednesday that the group is requesting an investigation from the Acting House and Senate Sergeants at Arms and the U.S. Capitol Police. The letter asks for review of guest log books, video surveillance and enforcement of the visitor policies.

"Many of the members who signed this letter, including those of us who have served in the military and are trained to recognize suspicious activity, as well as various members of our staff, witnessed an extremely high number of outside groups in the complex on Tuesday, January 5," the lawmakers wrote.

Scanlon also signed the letter, and said the events at the Capitol were "not a peaceful protest."

"We need answers on what happened," Scanlon said. "We know there's a lot we're going to learn going forward on what transpired on the 6th."