Robert Sanford, of Boothwyn, faces up to 10 years in prison for his alleged actions during Capitol riot

A retired Chester firefighter, allegedly caught on video throwing a fire extinguisher at Capitol Police during the insurrection Washington, D.C., last week, could face up to 10 years in prison. 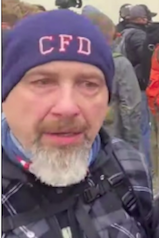 Robert Sanford, 55, of Boothwyn, Delaware County, was among hundreds of pro-Trump supporters who stormed the U.S. Capitol on Jan. 6 while Congress was certifying the Electoral College results of the November election, according to a criminal complaint filed by the FBI in the U.S. District Court for the District of Columbia.

Video shows a man investigators identified as Sanford carrying a fire extinguisher on the Lower West Terrace shortly after the mob broke through barriers and then allegedly throwing the extinguisher, striking three police officers in their heads. One of them was not wearing a helmet.

Sanford is wearing "a stocking cap, a dark jacket or shirt with a plaid pattern, and a light and dark two-tone backpack," authorities said.

The incident can be seen in the tweet below, and a longer video can be viewed on YouTube.

BREAKING: @WSJ reports: A retired Pennsylvania firefighter was arrested today for allegedly throwing a fire extinguisher that hit 3 police officers at the pro-Trump riot at the U.S. Capitol as captured on videohttps://t.co/30WFdH2MVy

Sanford is charged with knowingly entering a restricted building or grounds without lawful authority, disorderly or disruptive conduct on U.S. Capitol grounds, assault and resisting or impeding officers engaged in the performance of official duties.

The FBI identified Sanford after a friend contacted a bureau office, saying Sanford had admitted to being a person of interest, the complaint says. Sanford had been on the Capitol grounds for about 10 minutes, but did not mention throwing any objects, his friend told the FBI. The friend identified screen captures from the video footage as depicting Sanford.

Thousands of Trump supporters participated in the "Stop the Steal" rally earlier that day, decrying baseless voter fraud allegations that the president has spread since the November election.

Sanford traveled to Washington by bus with a group of people, his friend told the FBI. After listening to President Donald Trump speak near the White House, he joined the crowd in heading to the Capitol.

More than 100 people have been arrested as part of the investigation into the violent riot, which prompted Congress to evacuate and left five people dead.