Paris came for me – a Philadelphian's paean

Paris set up a permanent residency in my heart and always came at me hard. I need to return the favor now. 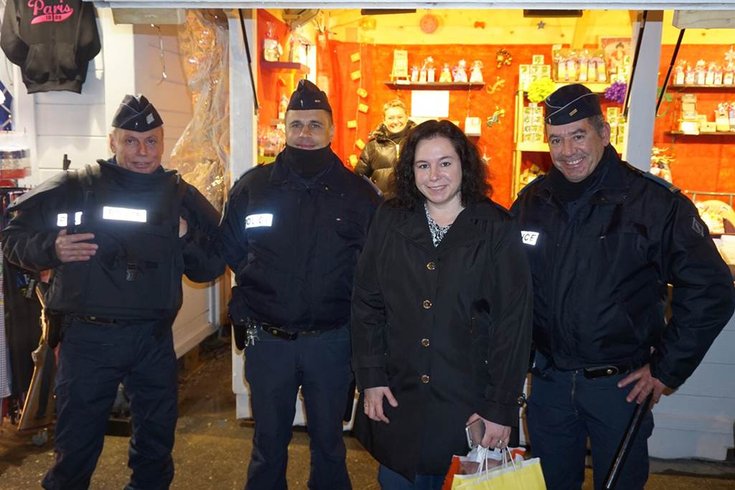 Julie Charnet poses with French security forces outside a shop for tourists in Paris.

When I was young, my mother would introduce me as “ma jeune fille” to anyone who sounded French. The two of us would laugh at her Brooklyn accent mixed with a butchered new language. The stranger, French or not, would typically chuckle and praise her attempts. She still does this, but I don’t mind. My mother can’t help herself, and well, I can’t blame her. Now, I do it, too. I suppose the apple and tree thing is on point. 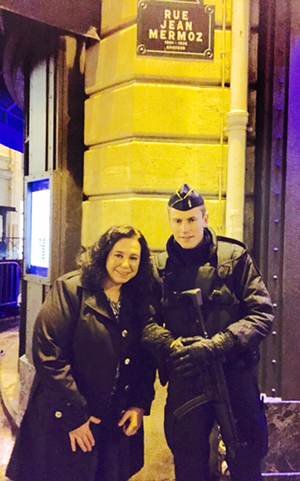 For us, traveling to Paris was out of the question. The expense and time off for my parents made it impossible. However, Matisse, Renoir, and chocolàt croissants were definitely known in my house. There was An American in Paris on VHS and we appreciated Parisian art from the occasional museum. For me, there was no better city I never had actually seen than Paris. I loved the fashion, perfume and sophistication. What girl doesn’t? Sometimes I would wander in my mom’s bedroom and sift through her scarf drawer filled with rich purples, blues and reds. They were not seen very often as Hermès couldn’t afford to have spaghetti or chicken gravy spilled on them at home. As I inhaled the perfume, and touched the silk, I felt Paris coming for me.

Eventually, my high school French came and I loved it. I tried to remember key phrases the best I could in case I ever had to use the bathroom, library, or order “American” coffee (big difference, trust me). Not long after that, came influences of a more adult palate (thanks Food Network) and jazz music. I felt the city tug me again.

When I met my husband, I didn’t know Paris came for him, too. Maybe I had familial influence, but he had hardcore Francophiles in his DNA. Unlike me, he actually had been to Paris. His mother took him there well over 20 times (she counted). It was a match. He spoke French better than I, and confirmed jazz as necessity here and in France. I was jealous, inspired, and in love with all of it – and him, too, of course.

In 2004, Paris came at me again. I let it take me this time. I decided to go with my (now) husband. This wasn’t about our romance, or the possibility of playing music in a new city. This was between Paris and me.

As we headed to our hotel from the airport, Jon poked fun at my gaze. “Aw, are you crying? You saw the Eiffel tower? Wait until tomorrow. We have so much to see and do.” He smiled and kissed me on my wet cheek. “Save your energy, you will need it,” he said. I sunk down from the window and took a deep breath. He hugged me hard. I was content to be taken away and came to appreciate his advice. Over that Thanksgiving, I walked through Paris with a full heart. I did the tourist traps, saw the unknown districts, and just experienced all that I could. The culture, food, people, and music was amazing. Worth the wait.

As I prepare for this upcoming trip to Paris, I’m still excited to go, but slightly subdued. After all, Paris can’t truly come for me right now. The guilt of a pleasure trip, during Thanksgiving, is creeping in.

The rich colors of reds, purples and blues now swirl in my head on a garish canvas. It’s difficult to block out the blood of artists, musicians and citizens having a good time. These images scroll by in between packing and cursing.

I am angry. Paris can’t come for me in this maze of Arondissements not yet cleaned for police evidence and unspeakable horror. I can’t ignore the realities of bodies being identified as mothers and fathers, sisters, brothers and cousins come down in couture or jeans to claim their own. How can Paris come for me now? Who am I to expect it, in the wake of such loss?

I take another deep breath like I did in that cab 11 years ago and make a decision. It’s okay, Paris. You don’t have to come to me. I will come to you. I will walk firmly on your streets; I will play my part as tourist and embrace you with a full heart again. You have given me so much through the years, it’s the least I can do. I’m coming for the music, the art, the food, and the cafes. I’m even coming for the citizens to laugh at my French. It’s better now, I promise.

So, this time I’m ready. I’m saving my energy because I know you will need me.

I’m coming for you, Paris.

Julie Charnet is a Philadelphia writer and vocalist. She wrote this paean to Paris before leaving for the City of Light earlier this week.