A visual feast of what was on display 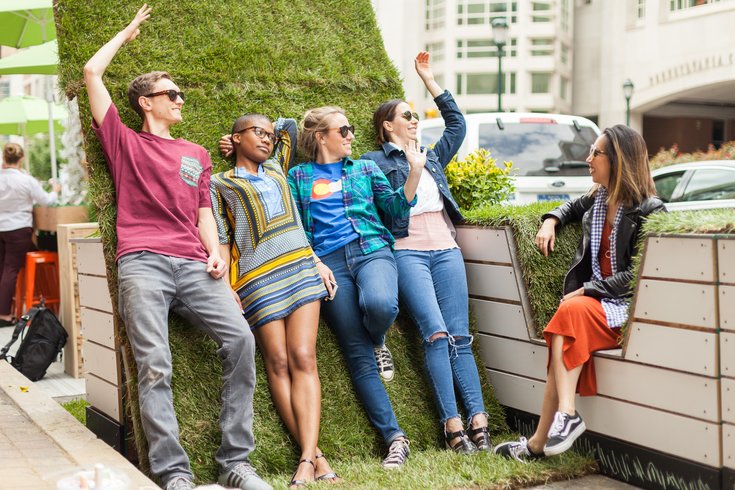 A parklet from Philly-based firm Stokes Architecture in conjunction with Open Streets and At Media, constructed for the AIA/Saint-Gobain Parklet Design Competition. Stokes and co. took home the jury competition's jury prize; that jury consisted of designers from Saint-Gobain and a wide array of AIA members.

In the spirit of reimagining Philadelphia's streetscape, the American Institute of Architects and Saint-Gobain partnered to host the AIA Convention's first parklet design competition, the first round of which took place May 19, and continues May 20, from noon to 7 p.m at 12th and Arch streets.

"The general public probably doesn’t think a lot about architecture unless they’re in a space that’s really uncomfortable. So I think that, for them, this is a nice learning experience," Tamara Mueller, manager of change management for Saint-Gobain Headquarters in Malvern, told PhillyVoice. "To see companies that are responsible for the built environment are thinking outside the box.”

Parklets, for those unfamiliar, are modular mini-parks that take the place of a parking spot. In Philadelphia, they've largely been pioneered by the University City District, which has worked to bring them to restaurant-heavy blocks with heavy foot traffic.

For the design competition, seven entrants — many of them local agencies or schools — competed for a cash prize of $1,250. Participants were given free reign with what they designed, though it had to be constructed with materials that cost less than $1,000 and, of course, fit into a 7-by-14-foot parking space.

Several designs sought to showcase recyclable materials and plant life, including Saint-Gobain's parklet, which will be on display for both days of the competition. (But isn't a competitor.) 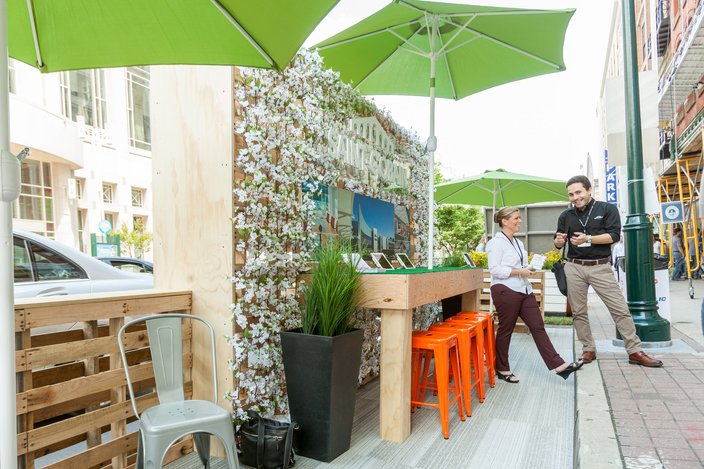 “We’re a company that focuses on employee health or occupant health, and that includes air quality, daylighting, access to nature — the human body was created to be outside, and as well, we have a huge focus on sustainable building materials, using things that are recycled or can be recycled," Mueller explained. "So when we went into ideas around our parklet, we wanted it to be very natural, not using products that were new ... Even the carpet here, one of our vendors donated this floor and it’s 100-percent recycled carpet. So what you see here will be reused and is sustainable.”

Gensler, a firm based out of Center City, opted to use color as the bait to hook passersby. It also used recycled plywood to create a bench, made by Philadelphia University student and Gensler intern Alex Khlor. 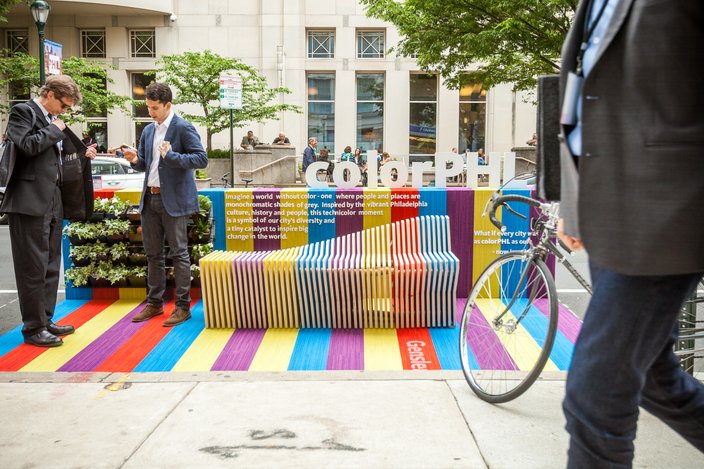 "This is the idea of activating space and driving people in through patterns and stripes," Jonathan Sandoval, an associate from Gensler, told PhillyVoice. "But I think we’re also trying to showcase that you can really activate your city by just these small [efforts] and that design can really influence any part of the city, in any neighborhood.”

Gensler took home the People's Choice Award title for the most popular parklet of the seven; Stokes Architecture, in conjunction with Open Streets and At Media, took home the jury prize for their parklet (pictured in the lead image).

Center City firm dMAS, meanwhile, opted to create a more interactive parklet, working with the Pennsylvania Historical Society to obtain a photocopy of William Penn's original grid map of Philadelphia. The parklet was constructed to riff off that grid concept; a sheet on the backside of the unit is situated just below a collection of crayons that people were encouraged to use to highlight some of their favorite blocks. 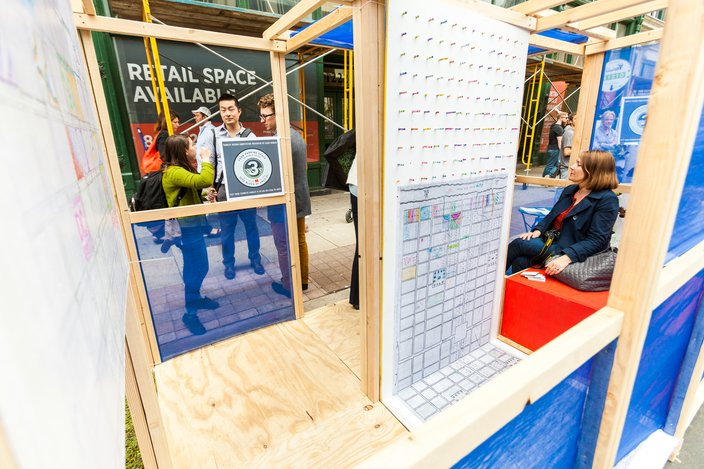 "If you walk the same street [as someone else], you walk out with this different idea or perspective about it," Concetta Martone, principal of dMAS, told PhillyVoice. "We brought in this activity to find a street or place in the city you have experienced, and mark it with color and give it your own dimension.

"And if you're not from Philadelphia we created an abstract version of a city grid people just color in.” 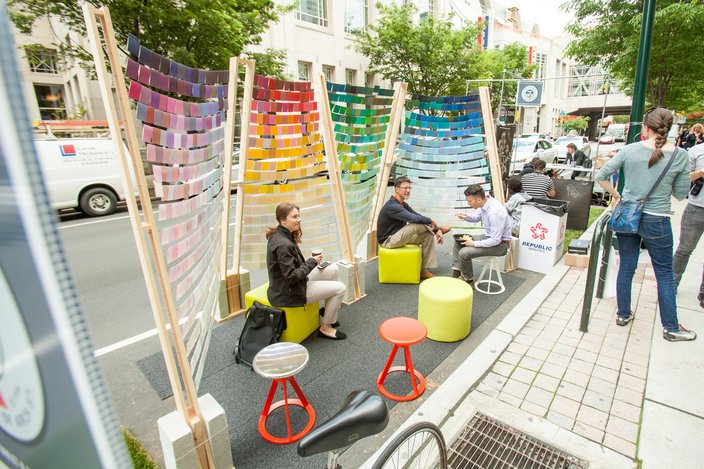 Those passing by were invited to sit and enjoy the parklets. On Thursday afternoon, a variety of people — many of them on lunch breaks — could be seen chatting with each other or reading in the parklet seating areas, which tend to be the focal point of parklet designs.

Fortunately, if you missed May 19's round of parklets, it's not too late to see what the competition has to offer and participate in the process: From noon to 7 p.m. on Friday, May 20, seven more designs will dot Arch Street, just outside of the Pennsylvania Convention Center and the Center / Architecture + Design. Onlookers are encouraged to vote through social media for their favorite design.

Plus, Saint-Gobain's handing out free pretzels. So, if nothing else, pop by for that.