Paul Hagen: What should the Phillies do with Odubel Herrera? 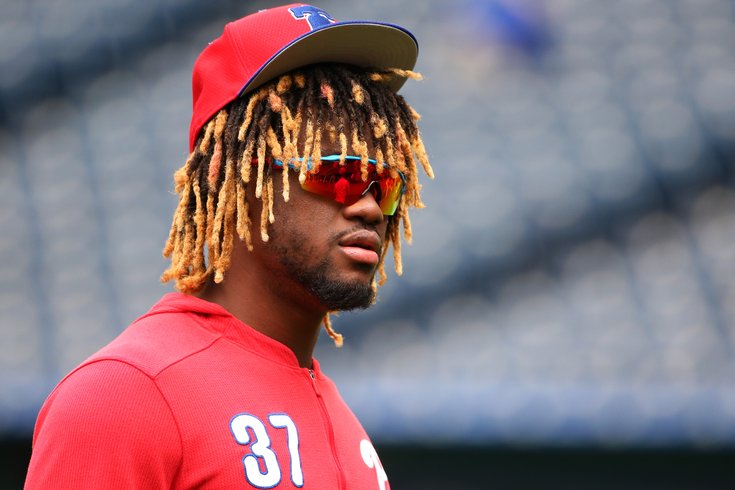 In March, 1977 disgruntled Texas Rangers second baseman Lenny Randle pummeled manager Frank Lucchesi before an exhibition game in Orlando. Lucchesi had barely been admitted to the hospital before owner Brad Corbett said Randle would never play another game for the team.

In June, 2006 Phillies ace Brett Myers was arrested in Boston after witnesses observed him scuffling with his wife, Kim, outside the team hotel. The next night the righthander made his scheduled start against the Red Sox.

How the Phillies ultimately handle the news that outfielder Odubel Herrera was arrested and charged with domestic abuse of his 20-year-old girlfriend Monday night in Atlantic City will certainly fall somewhere between those extremes. And it would be really dumb to form any opinions on what should be done without having all the facts.

Herrera was wrong. A man should never assault a woman, period, under any circumstances. He put himself in an indefensible situation. That much is beyond dispute. After that, though, the lines get blurry in a hurry.

A few other things are clear, though. In an increasingly harsh and judgmental world, in the "Me Too" era, how the Phillies react will reflect on the image of the entire organization. It’s important that they get this right. And it won’t be easy to nail it.

The franchise was smudged by the Myers incident. It was a mistake to let him pitch at Fenway Park under those circumstances, even though they were in a Wild Card race. It was a mistake for general manager Pat Gillick to justify it by pointing out that he was the team’s best starter at the time. Myers subsequently took a three-week leave of absence.

A lot has changed since then. Under Major League Baseball four-year-old domestic violence policy, which was collectively bargained with the Players Association, the issue is largely out of the team’s hands at the outset. Herrera has been placed on administrative leave for at least seven days while MLB investigates. When that concludes, commissioner Rob Manfred will announce what punishment, if any, will be handed down.

And that’s when the Phillies will come to their first ethical crossroads since John Middleton took control, a decision that will help inform the public perception of what the Phillies organization stands for in the community.

Will he ever play for the Phillies again? Should El Torito become El Finito? Will the team impose additional penalties? Or will the front office take the entirely defensible position that everybody deserves a second chance after presumably serving a suspension, paying a fine and maybe doing community service?

On such a hot button issue, there will inevitably be some backlash against whatever decision is ultimately made.

Manager Gabe Kapler, who got a phone call while at Starbucks, had the strongest reaction.

“The league and the players have negotiated a policy that club officials are not to be commenting on this situation specifically or any specific situation,” he said. “However, I can say more globally that domestic violence is unacceptable all the time, every time and that’s from a societal perspective, the Phillies perspective, my personal perspective... I can speak for myself and say it’s deeply disturbing. It’s not something you want to be dealing with. I’m personally not feeling great about it right now.”

There’s a reason why he’s taking this so personally. While playing for the Red Sox he launched the Gabe Kapler Foundation to raise awareness about domestic violence. He did that because his then-wife Lisa had been in an abusive relationship in high school, so they spoke at schools about the problem and even built a shelter in Southern California.

General manager Matt Klentak vowed to be as open as possible as more information is uncovered.

“I think the best approach in this matter is to operate with an element of transparency and honesty,” he said.

What makes the situation even murkier is that Herrera has been in a deep slump. He made the All-Star team in 2016 and then signed a 5-year, $30.5 million contract extension that also included two additional option years. But he’s hitting .222 with a .629 OPS and going into Tuesday night’s game against the Cardinals had started only four of the previous eight games. He’s no longer a guy they expect to build around. Not with Bryce Harper and Jean Segura and Andrew McCutchen and J.T. Realmuto around.

That shouldn’t matter but, of course, it does. Any team is going to be much more reluctant to part with a player they believe can help them win than one they deem easily replaceable.

Myers was an integral part of the 2007 team that began the Phillies run of five straight division championships and the 2008 club that won just the second World Series in franchise history. But do they still believe Herrera has that kind of value?

There are far more questions than answers right now. MLB’s investigation will be through, which means Herrera could remain in limbo for awhile. In the meantime there are baseball decisions to be made.

For now, the most likely scenario is to have Scott Kingery in center against left-handed starters with Nick Williams, recalled to take Herrera’s place on the roster, in left against righties with Andrew McCutchen moving to center. Kapler also noted that Roman Quinn, who worked out on the field Tuesday afternoon, looked as though his hamstring injury is much improved and that he could be ready to begin and rehab assignment by this weekend.

The Phillies also moved quickly trying to get Herrera’s name off the All-Star ballot and Kapler called a brief pregame team meeting. Klentak and Kapler had a brief phone conversation with Herrera, informing him that he’s been suspended. The general manager said the player was apologetic.

Randle, by the way, went on to play six more years in the big leagues. But he never wore a Rangers uniform again.

Different circumstances, different times. Sooner or later, the Phillies are going to have to make a difficult – and crucial – call about a player they once considered a potential cornerstone. And they’ll make it knowing that they’ll face some criticism no matter what they do.