Paul Holmgren steps down as Flyers president; GM Chuck Fletcher to take over his role 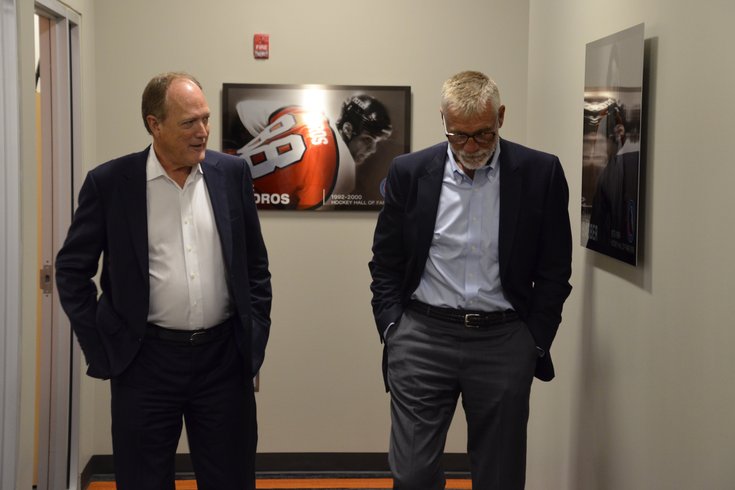 On Thursday, the Flyers announced that team president Paul Holmgren, who has held various roles over his four decades within the organization, will be stepping down from his current position in order to spend more time with his family.

He won't be leaving the organization entirely, however. Holmgren will take on a new role as a senior advisor to Comcast Spectacor Chairman and CEO (and Governor of the Flyers) Dave Scott and general manager Chuck Fletcher, who will now add President of Hockey Operations to the beginning of his title.

"It's been an honor to serve this franchise in many different roles throughout my life and I look forward to this next chapter,” Holmgren said in a team release. "I approached Dave about my idea to step aside to spend more time with my family. I have complete confidence in Chuck in his new role, leading the Flyers to great things. The Flyers have given so much to me and my family over the years, and I have forged life-long friendships with the many players, coaches, employees and fans who have helped me make Philadelphia home for over 40 years. I would like to thank Dave and Chuck for their efforts to lead this franchise into a bright future and for their continued confidence in me as I take on this new role."

While the move came suddenly this week, it's reportedly been in the works for some time, with Holmgren first approaching Scott more than a year ago with the idea of him taking a lesser role, mainly because he wanted to spent time with his eight grand children.

Here's more from Dave Isaac of The Courier Post.

Despite rumblings that a corporate ownership was taking over more and more, both Holmgren and Scott said that the decision to take the advisor role was Holmgren’s.

Scott said that Holmgren would still be team president if he hadn’t started planting the bug to move into semi-retirement in June of 2018.

“This was Paul. We met when we were out in Las Vegas at the Board of Governors meeting in June (last summer),” Scott said. “We really never had any set time table. I recognized after 40 years Paul had held just about every job in our organization from player to president and everything in between. He’s very close with his family and I kind of got it, but we didn’t talk about any specific timetable. We said, ‘Let’s get through the season.’”  [courierpostonline.com]

Perhaps this timeline further explains the timing of the Ron Hextall firing just a few months into the 2018-19 season. Prior to the passing of Ed Snider, Holmgren and Hextall had been tasked with taking charge of the organization and, as two proud alums, continuing on in Snider's vision for his franchise. With Holmgren already having decided to step away following this past season, he may not have felt comfortable leaving the organization's future in Hextall's hands, and opted rather to bring in someone with more experience as a GM, much like they did when they brought in Alain Vigneault as the ultimate replacement for Dave Hakstol, after Phantoms coach Scott Gordon got a look as the interim coach.

Either way, it seems as though the arrival of Chuck Fletcher, and the experience Holmgren had working alongside him in recent months, confirmed that this was the right time for a change.

"I think once Chuck got into the role, it became apparent to me [that now was the right time to step aside]," Holmgren told reporters during a conference call following the announcement. "I can’t speak for Dave, but Chuck has a really good grab on things. He loves the Flyers, he knows the iconic brand that is out there for the Flyers. He knows how important the Flyers are to the city of Philadelphia and wants to get us back to where we should be. Once I recognized that, and I believe Dave did too, that’s when I thought this is a good time for me to let Chuck do his thing.

"He is a good guy. He’s good at what he does. I love what he’s done with the coaching staff. I love what he did prior to the draft and going out and making a trade to get the rights to a player that we signed. The two trades for veteran defensemen that will help our young kids get better more quickly. I really love all the things that he has done. There is no question in my mind that this is the right time and no question in my mind that the leadership Chuck has, with Dave’s help, is going to be great for the Flyers moving forward."

While still maintaining a role within the organization, this seems to be the beginning of the end of what has been an impressive career, regardless of what you think of his decision-making for the Flyers over the years. Holmgren is the only player in Flyers history — and possibly one of the only ones in all of sports history, although we'd have to check — to have held pretty much every title for a franchise and work his way up from a sixth-round pick to the president of the team.

The 2018-19 season marked Holmgren's 40th with the organization, and, since being drafted back in 1975, there is pretty much no job he hasn't done.

Just take a look at his resume with the Flyers...

"It’s a family to me. It always has been. And I still see it today as a family. Ed Snider, Bob Clarke, Billy Barber and Bernie Parent and all those guys back in the early 70s, that’s really when it blossomed into that thing. To me, it is still that. And I feel a big part of that. That’s why I stayed. I love the Flyers. I don’t know how to get into it any deeper without getting emotional."

"Paul has been an invaluable leader within the Flyers family for more than 40 years, and instrumental in placing the organization in a strong position for future success,” Scott said in a team press release.  “Paul has earned a place among the organization’s all-time greats and certainly fits the role exemplified by our late Chairman, Ed Snider: 'A Flyer Forever.'”

Now, the task of turning this Flyers team around rests squarely on Fletcher's shoulders, as he will take over Holmgren's title of president and report directly to Scott.

"I want to thank Paul for his leadership and passion as we work to build a championship caliber team,” said Fletcher. "I've known Paul for many years and it's been a privilege to work with him over the last several months, and I will continue to seek his counsel. The Philadelphia Flyers are a storied franchise and have become an iconic brand since their inception. Paul's service to the organization, in every capacity, is a big reason for that success. I also look forward to working more directly with Dave as we strive to achieve our goal of bringing the Stanley Cup back to Philadelphia."

How this change in leadership is reflected on the roster remains to be seen, and may take some time to fully become apparent as Fletcher has only been on the job for about eight months, while Holmgren has been the main guiding force for some time now.

The Flyers went 37-37-8 last season and missed the playoffs for the second straight season — and they haven't made it out of the first round of the playoffs since 2012 — so perhaps a shakeup atop the organization isn't the worst thing.