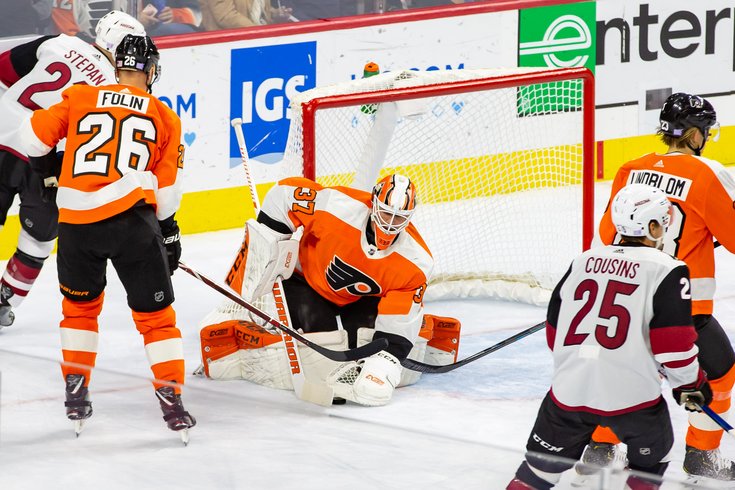 Goalie Brian Elliott of the Philadelphia Flyers during a game against the Arizona Coyotes at the Wells Fargo Center in South Philadelphia.

Well, that's one less thing to worry about.

A season after using a ridiculous eight goalies during the 2018-19 campaign, it appears — at least for now — that the team will have its top two for 2019-20 pretty well set. Reports came out Wednesday saying that the Flyers had agreed to bring Brian Elliott back for one season, at $2 million.

He will assume the role of mentor and backup to 20-year-old phenom and future of the franchise Carter Hart, who had an impressive debut half season last winter and spring.

If all goes according to plan, Elliott will not have too many decisions next season as Hart will be getting the lion's share of starts as Chuck Fletcher's regime gets its first full season.

"Brian has played well for us the last two seasons," Fletcher said of Elliott, via the team's website. "He is a proven, quality goaltender who competes and battles hard every time he has the net. We are excited to have him rejoin our team."

The Flyers have approximately $15.1 million left in salary cap space and still need to sign restricted free agents Ivan Provorov, Travis Konecny and Scott Laughton — in addition to any other open market acquisitions when NHL Free Agency begins on July 1.