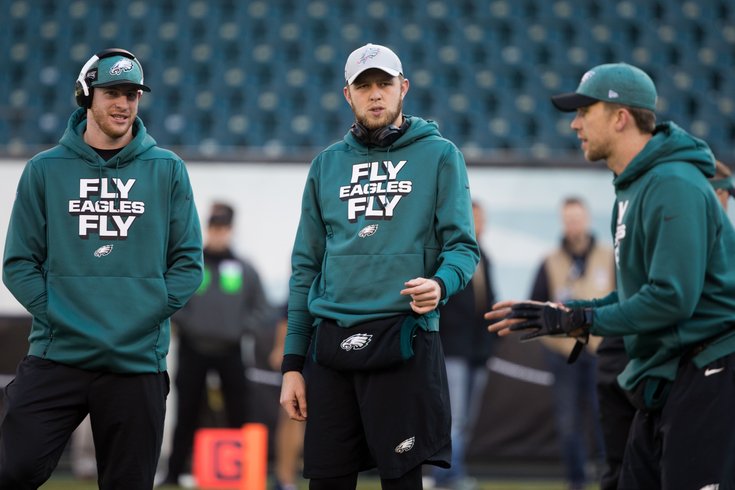 Even after Nick Foles led the Philadelphia Eagles to the playoffs this season, a year after he was named the MVP of the Super Bowl, there was never a doubt that Carson Wentz was going to be the Birds' starting quarterback going forward. Still, Doug Pederson confirmed the obvious on Tuesday when presented with the question.

"Carson is the quarterback going forward," Pederson said. "In Nick's case, we'd love to have everybody back throughout the roster, but as I've said many, many times, it's not about one guy. It's about the team, and we'll do what's best for the team."

After the Eagles' loss in Dallas Week 14 against the Cowboys, it was revealed that Wentz had suffered a stress fracture in his back. Foles took over at that time, impressively leading the Eagles to four straight wins, including a road playoff win over the Chicago Bears. And then as you all saw on Sunday, the Eagles were beaten by the New Orleans Saints in the divisional round, in a down performance by Foles.

While Wentz has some injury concerns, there's no question about his talent. He's big, he has a strong arm with improving accuracy, and he can make plays with his feet, although he was less impressive in that last area in 2018 than he was in 2017 before he tore an ACL. He's also only 26 years old, and we may not yet have even seen him enter his prime. From a talent perspective, Wentz is the better quarterback, by a mile.

Of course, Foles has results on his side. Since rejoining the team in 2017, Foles had a 6-2 regular season record in Philly, and a 4-1 record in the playoffs. In some of those games, he was incredible. In others, not as much.

Foles has likely played his last game in Philadelphia, as the cost to keep both him and Wentz will be too exorbitant. The Eagles can pick up a $20 million option on Foles for the 2019 season, which Foles can either accept, or pay back a $2 million signing bonus, that would trigger his free agency. The Eagles also have the option of franchise tagging Foles, which they could use to keep him under their control, in an attempt to trade him.

Foles is a starting-caliber quarterback with proven success, and teams will have interest.