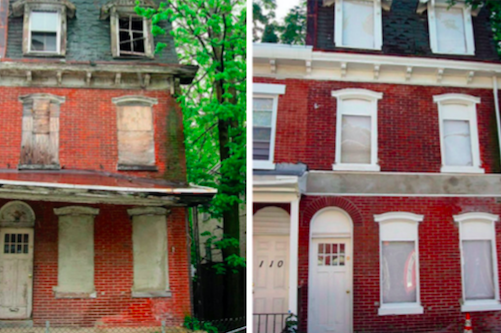 Before and after photos of a blighted property in Philadelphia.

In many respects, the personal toll of violent crime in the United States is virtually incalculable. The story behind each of the country's 12,000 annual gun homicides — and 221 total homicides in Philadelphia as of mid-October, the highest count in four years — is often left untold beyond the basic facts that surround the most heinous incidents to reach the public eye.

Understanding the real impact of violence from a social and economic standpoint, however, provides communities and law enforcement officials with a better blueprint for determining the most effective set of interventions to reduce a persistent societal burden.

Over the past few years, researchers at the University of Pennsylvania's Urban Health Lab have undertaken a study into the effects of neighborhood blight on rates of violence. A study published in early 2015 revealed that low-cost fixes to abandoned properties does more than eliminate eyesores, significantly decreasing the number of both serious and nuisance crimes in the vicinity of remediated Philadelphia buildings.

A follow-up study published last week in the American Journal of Public Health breaks down for the first time the financial ramifications of efforts to eliminate local blight. Drawing on statistics from the Department of Licenses & Inspections, the Philadelphia Police Department and the Pennsylvania Horticultural Society, the research team led by epidemiologist Charles C. Branas calculated the value in savings from adding windows to vacant houses and clearing abandoned lots.

Given the promising public health opportunity and potential cost benefits posed by addressing the blighted urban contexts within which firearm violence often occurs, as well as the disproportionately high and persistent burden of firearm violence in US cities, we conducted quasi-experimental analyses to determine the impacts and economic returns on investment of key urban blight remediation programs on the occurrence of firearm violence.

In 2010, Philadelphia passed an ordinance requiring the owners of abandoned buildings to install working doors and windows in all structural openings of their properties. The PHS used this ordinance to require remediation of trash-strewn and overgrown vacant lots owned both privately and by the city. Monthly maintenance schedules have since been used to monitor and assess progress on these initiatives.

In neighborhoods throughout Philadelphia, the team at Penn compared 2,356 building addresses that complied with the blight ordinance to a randomly selected and matched set of properties that had received citations but had not been treated. Another 4,436 remediated vacant lot addresses were enrolled in the study and compared to a master database of 49,690 untreated vacant lots.

Both blight remediation programs were evaluated in terms of firearm and non-firearm assault outcomes usings dates and latitude-longitude coordinates from police records spanning 1999-2013. Sociodemographic factors including age, education, poverty and income were also factored in to examine how particular structures impact crime on any given block.

The direct and indirect economic costs of crime are incurred by victims (e.g., medical expenses, property loss or damage), the criminal justice system (e.g., police, court, and in- carceration costs), and society at large (including the aforementioned costs as well as other indirect costs; e.g., productivity losses resulting from criminals choosing to engage in illegal activities instead of legal activities that contribute to gross domestic product, pain, and suffering costs). We calculated average annual returns on investment for each remediation program from the perspectives of taxpayers and society at large as the net benefit associated with an investment, divided by the cost of the investment.

Using a median 1,078-square-foot parcel, the cost of blight remediation at abandoned buildings and vacant lots stands at about $2550 and $1597, respectively, with an additional $180 annual maintenance cost.

Over a 3.8-year average period of evaluation and attendant crime reduction, researchers calculated that the average annual cost offsets to the criminal justice system were $16,554 per abandoned building remediation and $43,037 per vacant lot greening. Broader cost offsets to society totaled $205,019 and $533,021 for each category of remediation.

Based on these figures and the initial cost of remediation, the first-year return on investment to taxpayers for firearm assaults averted was $5 per abandoned building and $26 per vacant lot. The societal first-year returns on investment for firearm assaults averted were $79 for the remediation of an abandoned building and $333 for the greening of a vacant lot.

“The immeasurable pain and void left when lives are lost to firearm violence sends a ripple effect through families and neighborhoods,” said Branas, director of the Penn Urban Health Lab. “This study demonstrates sustainable, replicable strategies that successfully reduce firearm violence. They can transform communities across the country, save lives, and provide well more than a full return on investment to taxpayers and their communities.”

Ongoing efforts to address blight in Philadelphia include projects such as the installation of rain gardens by the Philadelphia Water Department, the establishment of the city's nascent Land Bank and the burgeoning non-profit Philadelphia Community Corps (PCC), a local deconstruction outfit, salvager and jobs training program.

"Removing abandoned houses in these neighborhoods is the simplest, quickest and biggest return on investment we can have in terms of making an impact to help communities revitalize themselves," Greg Trainor, founder of PCC, told PhillyVoice. "These properties are a weight on all of us in terms of crime, health issues, fires, collapses and the flight of economic investment. Our theory of change is that by removing these houses, we're bringing jobs, skills and affordable buildings back into the neighborhoods of Philadelphia."