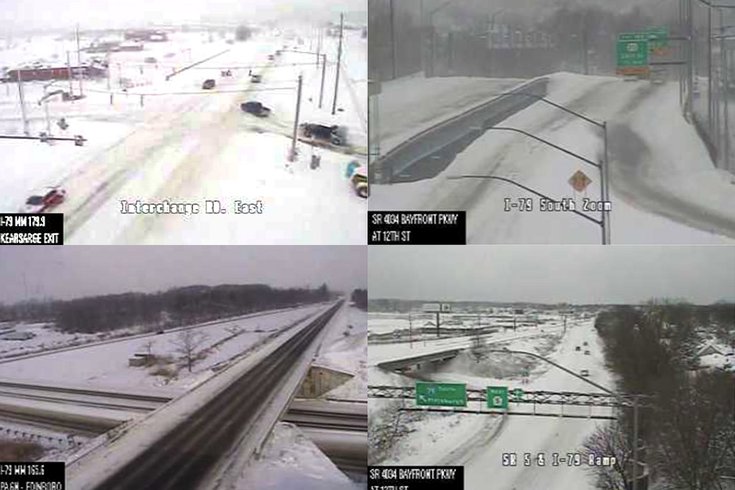 Residents of the Delaware Valley who had hoped for a white Christmas in 2017 were treated to an ordinary, overcast day on Monday.

But across the state? Erie set a record for snowfall, accumulating an outrageous 34 inches of snow on Christmas day alone.

The lake-effect snow band, continuing into Tuesday, dropped an astounding 55 inches of snow, or about 4.5 feet, in a span of 36 hours, according to The Weather Channel.

Erie's previous Christmas day snowfall record was a mere 8.1 inches in 2002. Even the snowiest day in the city's history, a 20-inch storm in November 1956 — pales in comparison to the new record.

In the month of December alone, Erie has picked up 92 inches of snow. The previous December record of 66.9 inches came in 1989.

Scenes from around the city showed a near-complete whiteout.

I live just 10 mins outside of #Erie and this sign has never been more relevant and appropriate. 34 inches of snow inside 24 hours on Christmas Day and it’s not stop and more on the way this weekend. pic.twitter.com/SMGG7hiGlu

When your neighbor tells you to never come home 🙀 #Erie pic.twitter.com/dBXsu1zhoo

So this is what my grandma woke up to after completely cleaning off her truck last night #Erie pic.twitter.com/xHHdZ1ky8c

The clean-up in Erie, barring additional snowfall, will probably linger for quite some time. PennDOT has warned motorists to exercise caution as the time between Christmas and New Year's often comes with a spike in car accidents.