It's Primary Day in Pennsylvania: Here's a 5-minute guide 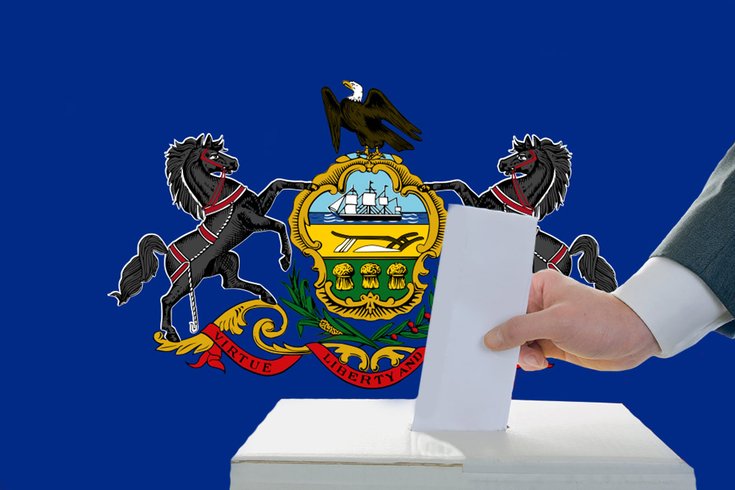 Today is Primary Day in Pennsylvania.

Polls are open until 8 p.m. Anybody in line by then must be allowed to vote. You can find your polling place here. Report issues or problems encountered at the polling place to the Philadelphia County Board of Elections at 215-686-1590.

Voters in Montgomery County may want to give themselves extra time on Tuesday as they will encounter new voting machines. There is an instructional video – on the county website – worth watching before heading to the polls.

There are two high-profile contests in Philadelphia – for the Democratic nominations for mayor and City Council – plus four ballot questions.

Only registered Democrats or Republicans are eligible to vote for candidates in the May primary. But all voters, regardless of party affiliation, may vote on ballot questions.

One statewide office will appear on ballots: Judge of the Superior Court.

As you head out to vote, here's a rundown of what to expect in Philadelphia, as well as Bucks, Chester, Delaware and Montgomery counties: 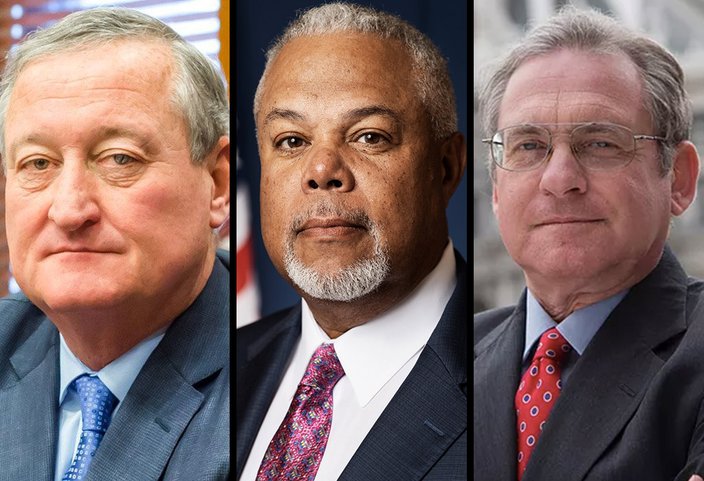 Kenney was elected four years ago and has worked to make good on his promise to improve city neighborhoods. He managed to get a soda tax passed to fund universal pre-K, community schools and rehabilitation of parks, rec centers and playgrounds. But that big achievement has raised the ire of many critics and all of his challengers oppose the tax. His other priorities include a safe site to allow drug users to inject under medical supervision in an effort to stem the tide of opioid overdoses, though Kenney tapped the brakes recently on a proposal to locate the first one in the drug-addled Kensington neighborhood.

Williams is a longtime state senator in the 8th District, representing parts of West Philadelphia, South Philadelphia and Delaware County. (In 2015, he finished second behind Kenney in the mayoral election.) Williams opposes both the soda tax and safe-injection sites, and has said he would end stop-and-frisk by Philadelphia police. The Democratic whip in Harrisburg, he says he would be a better advocate for the city in the state capital.

Butkovitz was the city controller in Philadelphia since 2005 before his surprise loss to Rebecca Rhynhart in the 2017 election. A vocal foe of the soda tax and safe-injection sites, he also says he would get rid of stop-and-frisk. He has been aggressive in his criticism of Kenney.

All 17 City Council seats – 10 district, 7 at-large – are on the ballot, with competitive races in five districts.

There are contests for five district seats.

In the 1st Council District, which stretches along the Delaware River from South Philadelphia across Center City, Chinatown, and the River Wards, incumbent Democrat Mark Squilla is challenged by Democrat Lou Lanni, an openly gay Philadelphia police officer.

In the 3rd Council District, which includes parts of West Philadelphia and Southwest Philadelphia, incumbent Democrat Jannie Blackwell is contested by Jamie Gauthier, an urban planner and former executive director of the Fairmount Park Conservancy.

In the 4th Council District, which includes parts of Northwest Philadelphia and West Philadelphia, incumbent Curtis Jones is opposed by Ron Adams, a Roxborough resident and operations manager for the High Intensity Drug Trafficking Area program.

In the 7th Council District, which includes parts of North Philadelphia, including Hunting Park and Frankford, incumbent Democrat Maria Quiñones-Sánchez is challenged by state Rep. Angel Cruz, a ward leader who has long battled the councilwoman.

Seven At-Large seats on City Council are on the ballot. Voters in each party can vote for five candidates. At least two Republicans are guaranteed seats.

On the Republican side, incumbents Al Taubenberger and David Oh are seeking re-election. A field of five challengers are in the mix. They are Irina Goldstein, Bill Heeney, Drew Murray, Dan Tinney and Matt Wolfe.

Voters also will nominate candidates for City Commission, sheriff and register of wills, as well as judgeships on the Philadelphia Court of Common Pleas and Municipal Court.

Four questions will appear on city ballots. All voters can vote "Yes" or "No" on the following:

“Yes” means you want to change the Charter so that the people who serve on City Council will be identified in gender neutral terms.

“Yes” means you want to change the Charter to formally and permanently create an Office of Immigrant Affairs. The office would: develop city policies on issues affecting immigrant communities; help city agencies make it easier for non-English speakers to use city services; work to make sure that immigrants are treated fairly by all city agencies and employees; and serve as a link between the city and its immigrant communities. The office was first established by former Mayor Michael Nutter by executive order and remains open under the Kenney Administration.

3. Shall The Philadelphia Home Rule Charter be amended to call on the General Assembly to either increase the Pennsylvania minimum wage now, so that it reaches $15 an hour, in stages, by 2025; or allow the City of Philadelphia to itself provide for a decent, family sustaining, living wage for working Philadelphians?

4. Shall The Philadelphia Home Rule Charter be amended to require the establishment of “Public Safety Enforcement Officers” to assist the Police Department in regulating the flow of traffic; to enforce and assist the appropriate City officers in the enforcement of ordinances relating to the quality of life in the City’s neighborhoods; and to perform such other related duties as the Managing Director or Council may require?

“Yes” means you want to change the Charter to allow the city to hire “Public Safety Enforcement Officers," a new job classification. The officers would help police with traffic control where busy intersections are blocked and elsewhere, and enforce laws relating to the quality of life in city neighborhoods. They would not have the power to arrest people or carry guns. According to the Charter, officials who work for the Mayor decide how many people should be hired in their departments. If the ballot question passes, the Mayor’s Managing Director or City Council could decide how many Public Safety Enforcement Officers should be hired. The Managing Director would decide in which departments these officers will work.

In Bucks County, registered Democrats and Republicans can vote in the primary for the three seats on the County Commission, clerk of courts, coroner, register of wills, treasurer and as well as judgeships on the Bucks County Court of Common Pleas and Magisterial District Courts. In addition, candidates for municipal offices and local school boards are on the ballot.

In Chester County, Democrats and Republicans who are registered can vote in the primary elections for the three seats on the County Commission, district attorney, prothonotary, recorder of deeds, register of wills, sheriff and judgeships on the Chester County Court of Common Pleas and Magisterial District Courts. There are ballot questions in some municipalities, plus races for municipal offices and school boards.

Unaffiliated and third party voters also can vote on the ballot referendum questions in Franklin and West Marlborough townships:

• FRANKLIN TOWNSHIP: Do you favor the granting of liquor licenses for the sale of liquor in the Township of Franklin?

• WEST MARLBOROUGH TOWNSHIP: Do you favor the granting of liquor licenses for the sale of liquor in the Township of West Marlborough of Chester County?

In Delaware County, registered Democrats and Republicans can vote in the primary for three of five seats on the County Council, plus district attorney and judgeships on the Delaware County Court of Common Pleas and Magisterial District Courts. Also, there are races for municipal offices and school boards.

Unaffiliated and third-party voters also can vote on the following ballot questions in Aldan and Lansdowne boroughs, and Marple and Middletown townships:

• ALDAN BOROUGH: Do you favor the granting of liquor licenses for the sale of liquor in Aldan Borough of Delaware County?

• LANSDOWNE BOROUGH: Do you favor the granting of liquor licenses for the sale of liquor in the Borough of Lansdowne?

• MARPLE TOWNSHIP: Do you favor the granting of liquor licenses for the sale of liquor in Marple Township of Delaware County?

• MIDDLETOWN TOWNSHIP: Shall Middletown Township, Delaware County, incur electoral debt in the sum of $8 million for the purpose of financing the purchase of +/- 80.992 acres of land, more or less, at the northwest corner of Forge Road and Valley Road, for active and passive recreational purposes and to preserve open space for the citizens of Middletown Township, and for paying related costs, including but not limited to bond closing costs, legal expenses, appraisals, surveys and settlement costs?

In Montgomery County, registered Democrats and Republicans can vote in the primary election for all three seats on the county commission. Other offices on the ballot include district attorney, clerk of courts, controller, coroner, prothonotary, recorder of deeds, register of wills, sheriff and treasurer, as well as judgeships on the Montgomery County Court of Common Pleas and Magisterial District Courts. There are also races for races for municipal offices and school boards.

Unaffiliated and third party voters also can vote on the following ballot question in Hatboro Borough:

The following candidates are running for seats on Pennsylvania Superior Court. The candidate ratings are by the Pennsylvania Bar Association, which conducts background checks and interviews the candidates:

Linda A. Cartisano is seeking retention.

Philadelphia County: The following candidates are running for seats on the Court of Common Pleas. Candidate ratings are by the Philadelphia Bar Association.

The forecast from the National Weather Service calls for great voting weather in the region: sunny skies, with a high near 75.