Pew: Gentrification just one facet of neighborhood change in Philadelphia 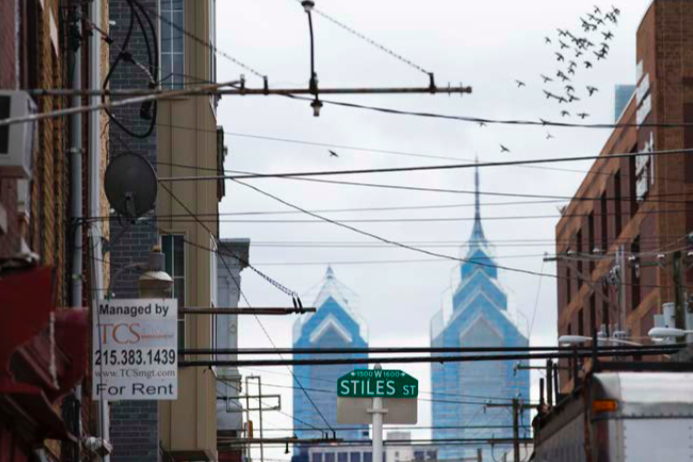 Since the turn of the century, neighborhood change in Philadelphia has qualified as gentrification in just 15 out of the city's 372 residential census tracts, according to a set of definitions laid out in a report published Thursday by the Pew Charitable Trusts.

In an attempt to assess various factors that lead to neighborhood transformation, Pew's researchers advanced a statistical approach to a perennially heated topic that involves displacement, discrimination, economic inequality and social friction. The report's definition of gentrification is based on three elements measured from 2000-2014:

• A census tract needed a median household income in 2000 below 80 percent of regional median income, $53,992, the threshold set by the federal government to determine eligibility for housing assistance and other programs aimed at low-income households

• The tract’s median income had to have increased at least 10 percent in inflation-adjusted dollars from 2000 to 2014, a period in which the median income of the city as a whole actually fell by about 10 percent.

To some, these criteria would appear to circumvent the racial focus and hyperlocal histories behind the fiercest gentrification debates in cities across the United States. What Pew's report proposes, however, is that in Philadelphia, many neighborhood changes are associated with gentrification but driven by other nuanced patterns of growth, decline and resettlement. 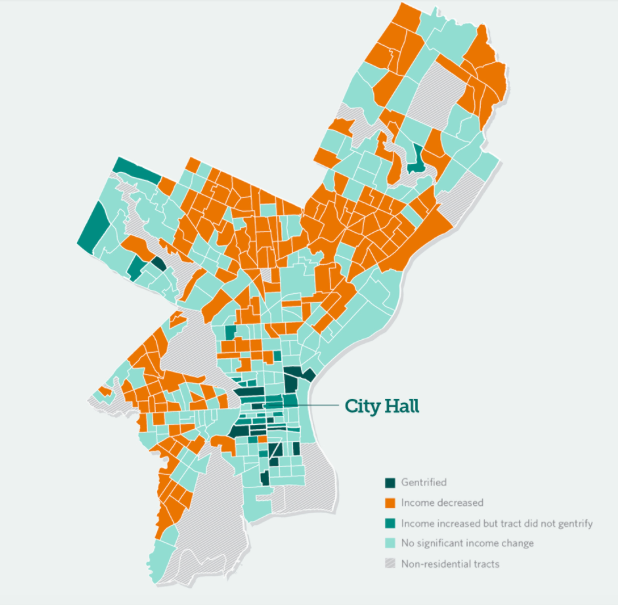 Among the 15 tracts that did meet Pew's definition of gentrification, the majority were located in South Philadelphia or just north of Center City. These included Graduate Hospital, Passyunk Square, Northern Liberties, Pennsport, Roxborough, and neighborhoods surrounding Temple University. Each has had its own set of factors, according to the report:


The areas where gentrification did occur, according to this report’s income-based definition, fall into four distinct categories, based largely on what the neighborhoods were like in 2000. One set was characterized primarily by working-class, African-American populations, another by mixed-income, mostly white ones. A third group consisted of old industrial areas with relatively few residents. The final category comprised nonaffluent sections of Center City and adjacent neighborhoods. The pace and scope of change were different in each of the neighborhood categories.

Notably, Pew's report found that Philadelphia's gentrified tracts were not among the lowest-income areas of the city in 2000 and 12 of them had a higher percentage of white residents than the city as a whole, at the time. The most dramatic instance of gentrification was Graduate Hospital: the neighborhood's black population fell from 7,793 in 2000 to 3,450 in 2014, while the number of white residents more than tripled during that period.

Though it would be difficult for a report of this kind to disarm the political tone of street-level attitudes about gentrification, its immediate value lies in the abundance of data it has compiled over a measurable period of time — from real estate prices and construction to education levels, racial composition and public opinion. It encourages a closer look at the forces of gentrification rather than the day-to-day tensions, real as they are, on which those forces make impacts both visible and invisible to the naked eye.

What jumps out more than anything is the extent to which poverty has risen in Philadelphia and continues to shape the horizon of its neighborhoods across all factors brought into the equation.

"How widespread the phenomenon and other forms of neighborhood change become in the years ahead remains to be seen," the report concludes, "particularly in areas more distant from downtown in a city where far more neighborhoods have been losing ground than gaining economically."

[Philadelphia's Changing Neighborhoods: Gentrification and other shifts since 2000]