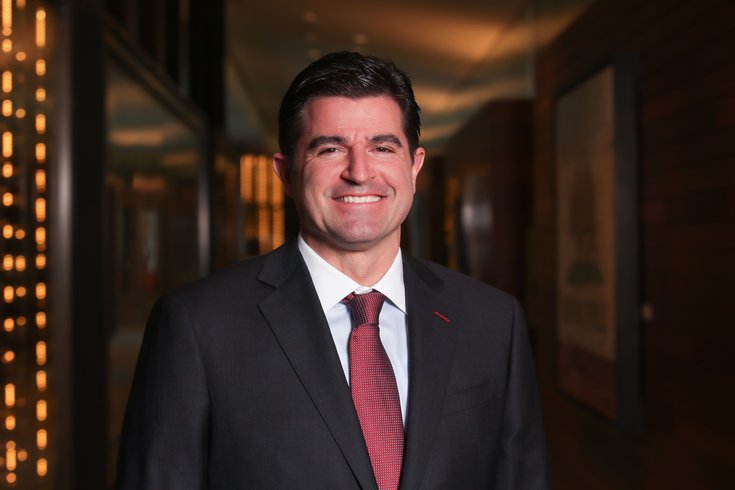 Scott O'Neil's departure from the Sixers is effective immediately.

“I would like to thank Josh Harris and David Blitzer for inspiring, engaging and empowering me to bring together the most talented executive team in sports and entertainment,” O’Neil said in a statement Wednesday. “Josh and David are extraordinary leaders, partners and friends. Their commitment to our teams, brands, employees — and most importantly — their commitment to serving the City of Philadelphia, Newark and Camden — made our success together possible."

"To be trusted with the opportunity to steward epic brands — as well as buy, build, integrate, acquire and grow complimentary businesses to create HBSE as it is today — has been the ride of a lifetime, one for which I am humbled and grateful," O'Neil continued.

O'Neil's departure from the Sixers' parent company is effective immediately, according to Sportico. But O'Neil is expected to help with the search for his replacement.

“HBSE is the best organization I have ever been a part of, with the highest degree of difficulty I have ever encountered, and the most fun I have ever had, because every day brought a new opportunity to learn and develop," O'Neil said. "This company has grown through a culture of extraordinary teammates willing to be innovative, having the discipline to do the work and a courage to lead from the front. While I thoroughly enjoyed every moment of my time here, I am even more excited to build, grow and drive my next platform.”

O'Neil was named CEO of Harris Blitzer Sports & Entertainment when the parent company was officially formed in 2017.

"Scott has accomplished so much on behalf of the organization in a relatively short amount of time, driving our growth, culture and commitment to strengthening the communities in which we live, work, play and win,” Harris said. “I cannot overstate how much we value Scott’s enormous contributions to the company and how grateful I am for his leadership and partnership in creating a best-in-class culture at HBSE. We know he will find great success in whatever he chooses to accomplish in the future, and we will always be among his biggest advocates.”

During his eight-year tenure, O'Neil was responsible for the Sixers signing the first team jersey patch sponsorship among the four major North American professional sports leagues, overseeing the construction and development of the team's training facility in Camden and Innovation Lab and the first U.S. professional sports franchise to acquire an esports team.

“We are immensely grateful to Scott for his partnership over these past eight years of unprecedented growth,” Blitzer said. “His ambition, strategic outlook, and innovative mindset have been and will continue to be instrumental to the long-term success of our business. On behalf of everyone at HBSE, we thank Scott for his transformational leadership, drive and passion, and we look forward to celebrating his future successes.”

Prior to joining HBSE, O’Neil spent four years as president at Madison Square Garden from 2008-12. The Villanova University alum also spent close to a decade working for the NBA from 2000-08.