Stay or go: Does Dwight Howard fit with Sixers, or should they search elsewhere? 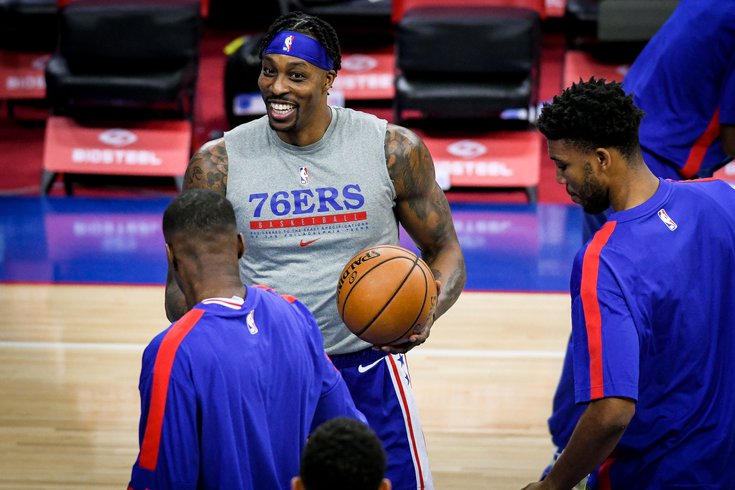 STAY OR GO: Should Sixers bring back Danny Green for another year?

Dwight Howard is next up on our hit list, as we take a look at whether a clunky fit is enough to sink his chances to stay in Philly.

After a successful year as a Lakers understudy in 2019-20, Dwight Howard's redemption tour continued in Philadelphia. Howard has figured out his niche as he moves into his late-30s, bringing energy and athleticism off of the bench with none of the weight of being a franchise-carrying star the way was in Orlando and expected to be in Los Angeles and Houston.

Like many bench players in his age bracket, the night-to-night Howard experience swung wildly back and forth between "impactful energy guy" and "completely out of his depth." Howard's athleticism was clearly still there — he finished several lob passes from teammates that he had no business getting to, and when he timed a shot-blocking attempt right, he was still able to replicate a volleyball spike on the hardwood. But his decision-making was suspect on both ends throughout the season, with Howard seemingly matching each blocked shot with a goaltend.

The biggest problem for Howard was his propensity for fouling, an issue that was impossible to ignore/escape at either end of the floor. Howard was a relentless attacker of the offensive glass, coming down with rebounds in traffic at a rate among the best in the league this past season. It was a double-edged sword for Philadelphia. Howard pounding the offensive glass was honestly better/more productive than a lot of the actual offense they ran for the second unit, but his single-minded pursuit of rebounds often led to him picking up silly, unnecessary fouls as he tried to clear space and box out opponents.

Perhaps it's fair to point out that part of the problem appeared to be a reputation issue. Howard had a much shorter leash than many of the opponents he was up against throughout the year, called for marginal moving screens and reactionary techs that other players probably would get away with. But that's a point that has to be considered assessing his year and his future here. If a player is constantly under close watch by the officials and gets no leeway to play how they prefer, that can't be ignored.

The other elephant in the room: Howard was part of most of Philadelphia's worst offensive lineups, which is not necessarily a reflection of him but certainly of the roster construction in Philadelphia. The Sixers were limited in the options they could use to put Howard on the floor, thanks to the toxic Simmons/Howard combination that reappeared in Philadelphia's do-or-die Game 7. Simmons being on the floor or not was the difference between Howard lineups getting their asses kicked up and down the floor and winning the battle against other bench lineups.

To be clear, the offensive numbers for either of those setups are not good, and a backup big man who might help more with that problem would be greatly appreciated in Philadelphia. But it does illustrate that Howard can serve as an effective enough backup center for the house not to burn down around him.

Frankly, the on-court product is almost secondary to everything Howard brought to the Sixers as a teammate, a sentence fragment that would have seemed unthinkable as recently as a few years ago. He was a relentless burst of energy as a teammate, doling out insane nicknames and embracing the weirdness of this season with both arms. When the Sixers were playing their home games in front of empty arenas, Howard would nonetheless take the floor as if he was playing for a crowded Wells Fargo Center, gesturing to the nonexistent crowd to keep himself (and his team) in the same mindset they would normally be in.

Howard ran hot and cold as a player, but certainly not as a member of a team. As far as minimum contract signings go, you could do a hell of a lot worse.

For me, Howard's future in Philadelphia wouldn't be in much doubt under normal-ish circumstances. Unless there's a team willing to give him some extra cash after two straight seasons of Howard playing the role of wise mentor, he's a cheap depth piece who gives you a clear skill set and good experience off of the bench. There would be absolutely nothing wrong with running it back as long as you feel good about his body holding up, and Howard takes his conditioning seriously in the latter stages of his career.

However, the Simmons factor complicates matters. Doc Rivers certainly tried to play the two together last season, to the tune of 368 minutes on the floor during the regular season, and it simply does not seem to work. It is not a surprise for a lineup with two non-shooters to be a spacing and offensive disaster, especially when you add Matisse Thybulle to the mix on top of that. But it's pretty devastating to worry so much about the fit of your backup big man with the max contract point guard, and the Sixers were effectively forced into leaning on Tobias Harris + bench players as a result.

This doesn't mean you can't bring Howard back, or that he can't be an effective bench player for the Sixers in 2021-22. In fact, if you do a similar comparison for departed big man Tony Bradley, the splits are even more dramatic, with Simmons' removal coinciding with dominant advanced numbers:

We're dealing with small sample size theater here, obviously, but you get the point. To me, the decision to bring Howard back hinges less on Howard than it does on your ability to acquire a viable alternative with a considerably different skill set. You don't want to head into next season with Howard as your only viable bench big, something they found out the hard way as his effectiveness dipped in the playoffs.

Will Howard's presence and previous role with the team prevent them from luring the sort of stretch big they might want/need in that spot? That's another point to consider. When you're hunting for minimum-type bench pieces as a capped-out team, your major selling points are either the chance to compete for a title, a bigger role than the player can get elsewhere, or both. The Sixers can't credibly offer as good a chance at the former as other teams after their second-round collapse, but they might be able to bring in a stretch big who sees a role next to Ben Simmons as a path to more minutes and more money in 2022-23.

Verdict: Stay, but with conditions

If the Sixers (read: Doc Rivers) are expecting Dwight Howard to come back and play the same role he did in 2020-21, you almost have to move on at the executive level in order to force the head coach's hand. Howard was an impactful piece on a title-winner a season ago, but Lakers coach Frank Vogel was ready and willing to sit him entirely if it became clear it wasn't his night. Howard simply can't be a nailed-on piece of your rotation, and if experimentation will only come with Howard playing for someone else next season, you basically have to say goodbye to a new fan favorite. Should Simmons survive the offseason, more small-ball and shooting-centric lineups are a necessity.

However, I would hope the coach is flexible enough to mix and match, and that the front office can see there's a role for Howard as part of a bench that has more diversity behind their starting center. Howard is still a credible pick-and-roll partner for guards like Shake Milton and Tyrese Maxey, and while his commitment to crashing the glass was part of Philadelphia's transition defense issue this season, I think ultimately you can get enough value out of him to justify some of the weaknesses he has. The key is putting him in a proper position in Philadelphia's hierarchy to minimize the impact of his flaws while maximizing his strengths.

At the minimum contract level, it's not always easy to find guys who can give you decent minutes on the court and add real off-court value. Since Howard does both, I think the Sixers should consider bringing him back, but only if they can put him in the proper place in the team's hierarchy.