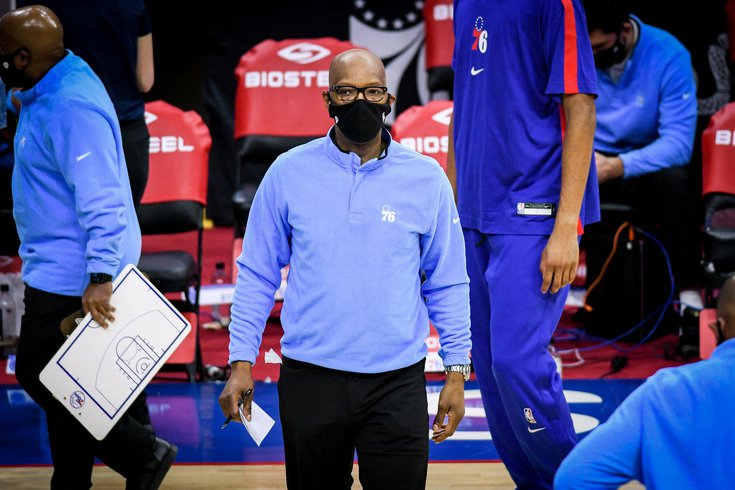 A lot of the talk in the wake of the Sixers' shocking second-round loss to the Hawks has revolved around Ben Simmons' poor run of play to finish out the season and his inability/unwillingness to shoot the basketball. In recent days, some of that anger has shifted to head coach Doc Rivers for not making the proper adjustments during Game 7, most noticeably with how he handled his rotations. Going 10 players deep in an elimination game is still difficult to comprehend.

He's also been hit with criticisms for how he handled his players, specifically Simmons, who many believe was coddled during the regular season, allowed to continue to play his own way without being forced into making changes to his game that would've helped his team avoid the surprisingly early exit. And, yes, changes are difficult to make in-season, but forcing his point guard to be more aggressive and assertive is not a fundamental change, nor is asking him to shoot more. At least that's how it should be, but when it comes to Simmons, all bets are off.

But contrary to popular belief, the team did put a priority on improving Simmons. And there were days earlier in the season when it appeared as though the 24-year-old, former first-overall pick was putting it all together, only to have all that whiff out the window when the postseason arrived. Now, one of the guys who had the biggest impact on Simmons during the regular season — and a guy who would theoretically be in position to help the young guard take that next step should the Sixers opt not to trade him — could be going away as well.

According to Brian Windhorst on a recent episode of his Hoop Collective podcast, Sixers assistant coach Sam Cassell and Nuggets assistant Wes Unseld Jr. are "two of the leading candidates" for the vacant Wizards job.

And Windhorst isn't the only one linking Cassell to the team where he got his start coaching...

As @WindhorstESPN reported earlier, I've heard Sam Cassell is in the mix for the Wizards' head coach position.

Cassell has history with the team, so that was expected. Tommy Sheppard said he wants "someone who’s a strong communicator." Cassell, certainly, is that.

Following a 15-year playing career, Cassell was a Wizards assistant from 2009-2014, until he was hired by Rivers, who was then the Clippers head coach. Cassell remained in L.A. with Rivers until following him to Philly prior to the 2020-21 season.

And one of his big roles with the Sixers this season was mentoring Simmons, meaning losing Cassell could be an issue if the Sixers are hoping to fix what ails their young All-Star. Detractors will say that Cassell can leave right along with Simmons because whatever impact the former NBA player had on his pupil vanished when the season reached its most critical moments. And to a certain extent, that's true. But Cassell can only control so much, and he isn't a trained sports psychologist, which is what it feels like Simmons needs more than anything at the moment.

Prior to the playoff meltdown, however, Cassell was getting rave reviews for his work with Simmons.

First, Simmons himself credited Cassell with helping him on his free throw shooting. That admittedly went away in the postseason, but it was pretty clear to anyone watching that the problems begin between Simmons' ears, something Simmons publicly admitted during the Hawks series. But back in late February, the Sixers point guard was going through a nice stretch of shooting, and here's what he had to say then about why he was looking better at the line, via The Sixers Wire.

Another big thing that has stood out is his success at the foul line. He made 3-for-5 on Thursday, but in his previous four games, he shot nine, 13, 14, and six free throws and he made them at a 78.6% clip. That is something new in his game that is not normally seen from him.

“I think me and Sam (Cassell) talk and work every day on it,” Simmons added. “Just taking my time, getting into a rhythm and knowing if I do miss, why I missed. I think that was big. I’m confident going to the line. I love getting in those free those and having that confidence to knock them down especially if I’m gonna shoot 10 or 12 a game.” [...]

“I think overall, we just work together,” Simmons finished. “I can relate to him. We talk every day and we have a great relationship. It’s only growing. He’s helped me a lot with my game and running this team.”   [sixerswire.com]

MORE: The only person who can fix Ben Simmons is Ben Simmons | Rivers says the Sixers can get Simmons right. Should we believe him?

In addition to working on Simmons' shooting, Cassell was also key in Simmons' growing as a post player. Just two days after Simmons' comments on his mentor, Rivers spoke about his longtime assistant's ability to help players grow. Once again, here's more from Ky Carlin of The Sixers Wire.

“I think Sam’s been amazing,” said Rivers. “He’s done it everywhere he’s gone. He has a great ability to communicate. He’s extremely direct, and I think he’s one of those guys, there’s guys around the league that have a way of telling you the truth, and not offending you. I think Sam does a great job of that.”

One area on offense that has been noticeable with Simmons has been the team posting him up more often. While Joel Embiid owns the paint and the post-up spots for Philadelphia, there is a way to post Simmons up as well. Rivers has wanted this from Simmons, and Cassell has helped him with that as well.

When all was said and done, Simmons posted a career low 3.0 turnovers per game.

Much of the credit for that turnaround can be attributed to "turnover whisperer" Sam Cassell.

“Sam destroys him on every turnover,” Rivers said. “Even the one today, if you saw, (Simmons) was looking at the bench because Sam literally lost his mind on it. Sam is the turnover whisperer, I guess, right now, because he’s all over Ben about it. It’s important for us, especially down the stretch.”

Simmons confirmed that Cassell has indeed often vocalized the importance of avoiding turnovers.

“Yeah, Sam’s been on my ass, which is a good thing,” he said with a laugh. “He’s trying to help me. I’m the point guard, I have the ball in my hands a lot of the time, so I’ve got to take care of it. We’re trying to make sure teams don’t have fast breaks, and that starts with turnovers and not rebounding the ball. As long as I take care of the ball, lower my turnovers and find my guys and have high assists, I think we’ll be all right.”  [nbcsports.com]

There are two ways of looking at this: 1) The Sixers put their best assistant on Simmons, and he worked his ass off, and Simmons still regressed when the playoffs arrived, so losing him is no big deal, or 2) Any progress made with Simmons that the team was hoping to carry into the 2021 offseason and ultimately improve upon for next season will be essentially starting back over at square one.

Even if you believe the correct way to view the situation is the former, the Sixers should try to do everything they can to keep Cassell — they do have other guards to develop, including last year's first-round pick. But at this point it seems like closing their eyes and hoping for the best is all the can do, because a guy like Cassell, who has been an NBA assistant for well over a decade, has long been due a head coaching shot. And with him now being linked to the team who gave him his start on that side of bench, this might be the time.

Hopefully, Rivers has a backup plan for how to get the most out of Simmons this offseason, because they're going to need it. Unless, of course, Daryl Morey has plans of his own...

MORE: If the Sixers trade Ben Simmons, who can they get for him?