Doc Rivers says the Sixers can get Ben Simmons right. Should we believe him? 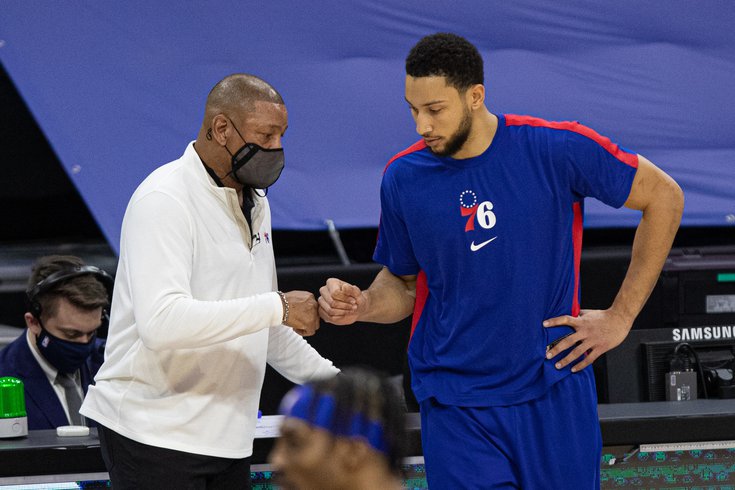 If Ben Simmons does return, Doc Rivers would have to mend fences with the All-Defense guard.

In the immediate aftermath of Philadelphia's Game 7 defeat, Doc Rivers could not provide an answer on whether he believed Ben Simmons could be the point guard of a title-winning team. It was a stunning turn from a coach who vociferously defended Simmons all year, through tough times and good times, and a jarring admission from a coach about one of his star players.

With a few hours of sleep and a few exit meetings to think about it, Rivers put on a better face. And even if it ends up being PR speak in service of getting Simmons traded for something of value this summer, Rivers insisted on Monday afternoon that he believes in Ben Simmons.

"I know exactly what we want to do. I'm positive in Ben, I'm very bullish on Ben still. But there's work, there is, and Ben will be willing to do it. That's the key," Rivers said Monday. "Sometimes you have to go through stuff to see it and be honest with it. Obviously, what Ben just went through, I can't imagine that, because he has so much greatness around him in all the things that he does, and there's areas that he can fix quickly in my opinion and get better, that will take him to another level. Sometimes you don't know why you're in different places, you know what I mean? But this may be one of them, and I look at this as a great challenge, but definitely a doable one."

The more time passes, the less doable it feels. Optimism was warranted after Philadelphia's second-round loss in 2018, the first run Embiid and Simmons made together in the postseason. There were excuses to be made in 2019, when Simmons moved aside in service of a better ballhandler and chased Kawhi Leonard around for a series. But the third second-round flameout of Simmons' career to date was the most brutal, several levels beyond what even his harshest critics would have projected.

The difficult part of finding a way forward for Simmons in Philadelphia is the familiarity of this failure. Rivers, who has only been here for a single season, sees this as a moment that should serve as a spark for the improvement. Admittedly, this is the biggest personal failure yet, and hitting rock bottom can be the source of turnaround. Great players, including players Simmons has claimed to idolize, have used humiliation to restart and rebuild, emerging on the other side as better versions of themselves.

Rivers believes this is as simple as putting together the right plan, creating the right environment, and working purposefully. Working smarter can be more important than working harder.

"I believe, without going in detail what we're doing, I believe we know what the right work is, the right type of work and the right way to do it," Rivers said Monday. "You can do the work all the time, but if it's not done in the right way, and the right type of work, you may not improve. After being here for a year, I really do believe we've identified what and how. And now we have to do the 'do' part, we have to work to do it. It's not going to be an easy job, but it's definitely a job that Ben can do.

"I think some of the stuff is obvious, you know, we're not hiding that Ben has to become a better free-throw shooter and a more confident free throw shooter. And if that happens, I really believe a lot of other parts of his game follow. I said that, if you remember, before the season started. The first thing I said was we got to get him to the line 10 times a night and to want to get to the line 10 times a night. And so we got to put in work so he can get there. But if we can get him there, man, his game goes to a different level."

How does one structure a plan, though, for a player whose biggest issue is an abdication of duty? There are enough videos from summertime workouts and pre-game warmups to suggest Simmons is capable of offering more as a scorer, even if every NBA player looks like a sniper when the lights aren't on. The need to improve this one specific area of his game has been so obvious that it has overwhelmed any conversation about his game. Knowing what the problem is has not helped him get any better on offense to this point, and trying to figure all this out in an increasingly pressure-packed scenario seems like the worst thing for someone admitting to dealing with a mental issue.

If all it took was work, Simmons would have flashed more by now. Simmons worked with renowned skills trainer Chris Johnson coming into the 2019-20 season, who has detailed in public exactly what an offseason workout plan looks like for Simmons. Johnson has claimed Simmons was in the gym for six days a week, participating in multiple skill sessions each day, with shooting a big point of emphasis. Notably, Johnson also chose to mock anyone with the gall to criticize Simmons for the state his game was in, following suit with Rivers and Simmons in a pattern that has emerged over time.

It will take the whole village to get this right, if the Sixers genuinely believe they can get this right. "Accountability" was the big buzzword of the 2020 offseason, and Rivers' work there was a mixed bag at best. The team's night-to-night consistency was proof that he made some difference as a leader, but his approach to coaching Simmons backfired in the end, leaving Rivers with another stinging playoff defeat. From the sound of things, "culture" may be the buzzword of the 2021 offseason.

"The pain has to drive you but the will to win has to drive you even more," Rivers said Monday. "The pain is a necessary evil that you have to go through sometimes to get to a smooth landing. The will to win has to drive you more and to do things right. Those are some of the things that we have to fix still, the culture of this team and around this team. The teaching, not just the players but even off the floor staff, on driving this entire organization. Everybody has to be in. And to me that's what we have to keep trying to improve, and the more we improve that around them, the more they'll do it themselves."

It is, as many of his teammates and coaches have been happy to note, unfair to judge Simmons by his lowest moment, and unfair to pin their second-round failure on Simmons and Simmons alone. Danny Green, whose absence contributed to Philadelphia's second-round meltdown against the Hawks, went to great lengths to protect Simmons from being the scapegoat in Philadelphia's defeat, hinting at the issues hiding in plain sight.

"I understand things that he's gone through this year alone has been heavy for him, and rough," Green said. "We all together win and lose. But mentally, you know, it's us encouraging him, and us I guess just being in the gym and talking to him and constantly in his ear and building that confidence in him. He's a mentally tough kid usually. We don't know what was going on. It happens with players. He's still a young player. And he can still grow; he still has a lot of room for a lot of potential. But yeah, Ben's gone through quite a bit this year and it's not his fault that we lost."

Speculating on those "things he has gone through" is something I'm not in a position to do. Family issues spilled into the public earlier this season, coinciding with Simmons' absence from the lineup for a spell midseason. It was subject left alone that went unasked as Simmons spoke about games over the last few months, an unfair thing to ask him to "address" or break down for the public. He is a public figure, but he is still entitled to a private life.

That sounds good in theory, at least. Rivers, who has been both a player and a coach in this league, is cognizant of the fact that his players are human beings before they are basketball players, liable to bring issues unrelated to their job with them to the office. And Rivers admitted Tuesday that the family strife certainly came up in conversations with their point guard during the season.

"Players are real people. And they have real lives, and they have real stuff going on. I have never had to deal with the public stuff that Ben had to deal with with my family," Rivers said. "But I would say if I had to, it would have affected me in some way or another. I can't tell you if it affected him on the floor or not, I don't know that. I just know it would have affected me in some way, I don't know how... Guys go through stuff like that or other stuff, and it's amazing how some are able to put it into compartments, and some are not."

"As a coach, your job is trying to teach the ones who don't do it well to do it well. Because, you know, I'm sure you've had many days where you come to work where probably your home life may not have been a great day. It's just part of it, but you still got to try to figure out a way of doing your job as best as you can. It's just with athletes, it's public, and that's a lot harder. It's so much harder for guys now than when I played."

Whatever demons Simmons is dealing with, basketball-related or otherwise, it is the Sixers' responsibility to help him sort through them for as long as he is a part of this organization. You the fan may no longer believe in him, and I, the media member, have expressed my doubts about Simmons for some time now. At this point, the Sixers are liable to have the most skeptical eyes out of all of us.

We will find out soon enough if Rivers is selling us a false bill of goods or truly believes what he's selling.