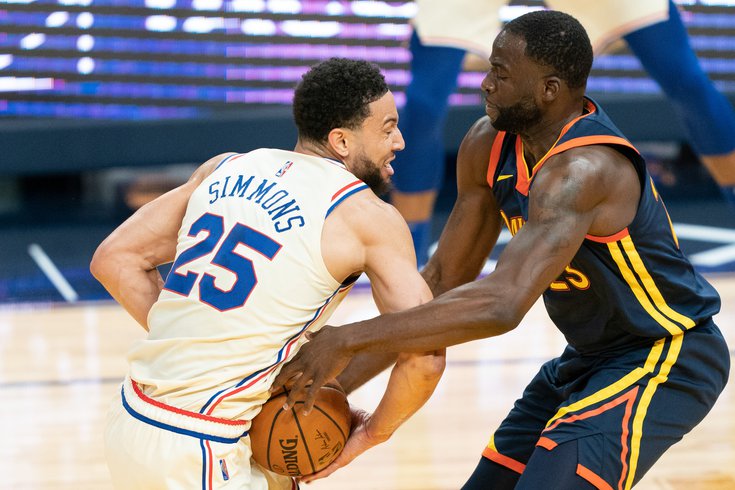 The Ben Simmons rumor mill continues to churn, and the latest potential suitor is a name you should expect to hear a ton up until draft night in late July: the Golden State Warriors.

That's the word from ESPN's Stephen A. Smith, who has been a source of a lot of Simmons gossip this past week. On Friday's edition of First Take, here's what Smith had to say about the meeting between Simmons' representation and Philly's front office, in addition to potential interest on the Warriors' end:

Here's the reality — as it was reported, Rich Paul talked to the Philadelphia 76ers, and obviously, he's Ben Simmons' agent, so you're going to want some involvement. Didn't ask for a trade, but certainly if Ben Simmons were to be traded, he wants some say in where he goes. That's what the reality is. And in the end, Philadelphia is trying to claim that Philadelphia is not interested in moving Ben Simmons.

Let me tell y'all something, that's a damn lie. That's a damn lie. It's just that they're not interested in getting trash back for him. You make a solid, bonafide offer, the Philadelphia 76ers are going to consider it. I believe the Golden State Warriors are going to make a push for Ben Simmons, so keep your ears tuned, stay tuned. It's possible Ben Simmons could end up in Golden State.

On the surface, there are two snap reactions to this sort of report:

Both things are true. Any trade the Warriors are making this offseason is going to be in an effort to put a stronger supporting cast around Stephen Curry in the final year of his contract next season. Curry has never said anything to suggest he wants to leave the franchise where he became a megastar, but playing elite-level basketball only to miss the playoffs entirely surely is not what he has in mind for his twilight years. Golden State is expected to get Klay Thompson back for the 2021-22 season, and assuming he's close to his normal self, this is a team that will pretty quickly leap from fringe playoff contender to legitimate contender with the right corresponding moves.

Simmons would be a terrific fit in Golden State, as they're one of the few teams in the league that can mask his weaknesses and extract maximum value from his strengths. Playing alongside an elite shooting backcourt, Simmons' passing and transition ability could take center stage, and the Warriors' history of using small-ball lineups would give them a starting point to build from with Simmons, who could potentially be devastating as a short-roll passer.

The 24-year-old "guard" (a title that could be changing regardless of who he plays for) is also young enough to help lead the Warriors into their next era of basketball but productive enough to help them win right now. That's a hard thing to balance, but it's part of what allows him to have value to Golden State and other teams looking for fixes and improvements without taking big steps back.

On the other end of the bargaining table, the problem is that Golden State's most valuable assets mostly offer delayed gratification. Post-lottery, the Warriors now own selections No. 7 and No. 14 in the 2021 NBA Draft, in addition to last year's No. 2 overall pick James Wiseman. Wiseman is sort of an "eye of the beholder" type player, a talented big who nonetheless showed his inexperience last season, but a developmental big offers basically nothing to the Sixers specifically. That's mostly true of the draft assets as well — if the Sixers are trading Ben Simmons, they need a return that offers immediate production and assistance for Joel Embiid in an effort to compete for titles in the short term.

MORE: The only person who can fix Ben Simmons is Ben Simmons | The Sixers are where they've always been, waiting for Ben Simmons

If you're looking for the potential path to a deal, the Warriors could be a useful partner in their ability/willingness to provide premium assets that could be immediately re-routed for something/someone the Sixers covet more. If a team like Washington, for example, is finally ready to move Bradley Beal and move into more of a true rebuilding phase, a pair of lottery picks this year would be a good place to start, though that would hardly be the end of the discussion if they're not the team getting Simmons back in the deal.

Unless the Sixers for some reason wanted Andrew Wiggins and his expensive contract — and his general style of play is antithetical to how Daryl Morey views basketball — the other complicating factor is figuring out where to re-route Embiid's former Kansas teammate. That would more than likely require additional draft compensation to make happen, at which point you have to question whether either team has the incentive to make a Simmons-centric deal happen instead of exploring other routes. Draymond Green is a better player, but the same issues persist if he's part of the deal since the Sixers have far less use for his talents with Embiid already anchoring the back end for Philly.

(To be clear, Wiggins was actually a better version of himself last year with Golden State, making a pretty sizable leap as a shooter and buying into their team concept. But if you're banking on him to be one of Embiid's primary sidekicks for a title chase, I think you have nothing but pain in your future.)

If both sides really wanted this to happen, I am certain there's a Frankenstein's monster sort of deal that they could put together over the next month to execute on or before draft night. Where there's a will, there tends to be a way in the NBA. But it would rely on so much cooperation and so many different variables that it doesn't appear worth the trouble from where we sit today. I wouldn't rule the possibility out entirely, but if Simmons ends up being moved, there are less complicated routes to make it happen.