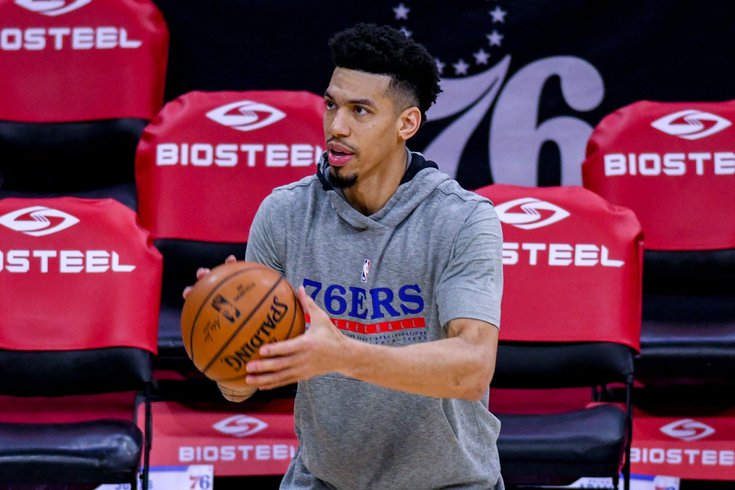 First up is Danny Green, their three-and-D starter whose season was cut short by a calf injury.

Arriving to Philadelphia as the return piece in the trade that sent Al Horford packing, Danny Green could have done almost nothing this season and still felt like a major upgrade. But Green ended up turning in one of his better seasons of the past half-decade, seeing his three-point numbers climb back over 40 percent after a dip to the mid-30s playing for the Lakers in 2019-20.

He arrived there the way Green always does — bombing away from the corners. Green led the NBA in corner threes made per game, knocking down a blistering 43.9 percent of his attempts from either corner according to NBA tracking data. That's a valued skill on any NBA team, but on a Philadelphia team built around Joel Embiid and Ben Simmons, it made him a useful sidekick to both of Philadelphia's brand-name stars, ready for a swing pass when Embiid was doubled in the post or a kick to the corner following a Ben Simmons drive. Green's ability to relocate from corner to corner is a skill that you only truly appreciate when you watch him play every night, with the veteran able to use feints, leans, and some under-the-radar physicality to create separation and open a window for a pass to his spot.

Green occupying one space at most or all times provided Embiid specifically with a sense of security as a passer. His comfort level making the crosscourt skip pass to the corner grew throughout the year, and Green always being where Embiid expected him to be was a huge reason for that.

Green also brought a very underappreciated skill to the table that helped Embiid this season: entry passing. In 2019-20, the Sixers struggled to merely get Embiid the ball on the low block, in part because of his own failure to establish position but also because of a stable of reluctant and inaccurate entry passers. Even when the big guy would create an early seal on his man, guys like Josh Richardson often threw passes that forced Embiid to give up that position to bring the ball in. Green was a reliably accurate passer who doubled as a great outlet for Embiid on the strong side, a willing shooter who would punish opponents for trying to double

You could make the argument Green was a big part of what made the team go. Lineup data suggests Philly was better defensively with Green on the bench — I would posit that's because Matisse Thybulle would often come in as he left — but the Sixers were considerably worse on offense when he hit the pine.

Green's playoff run will ultimately receive an incomplete grade following the calf injury that ruled him out for the series, but he was on track to be a "tale of two series" sort of player. Against Washington in round one, Green was absolutely on fire, lighting the Wizards up from the corners as they struggled to figure out a way to deal with Embiid and Simmons around the rim. Tasked with guarding Russell Westbrook for most of round one, Green did a nice job using sagging to bait Westbrook into the bad shots he loves.

Atlanta was a different story, and Green wore a lot of responsibility for Philadelphia's inability to contain Trae Young early. While I'd contend that was as much about scheme as anything else — Young killed drop coverage throughout the series against a series of Philly defenders — it followed a yearlong pattern of Green struggling to contain more dynamic ballhandlers around the league. Rivers often tasked Green with taking top assignments early in games, waiting to use Simmons until second halves, and Green looked a bit out of his depth taking the most important perimeter battles out of the gate.

That said, Green was one of the few guys who consistently made plays and got back in transition defense, and his awareness as a team defender was an asset to the team on a broader level. When the Sixers were at their best on defense, Green's weakside rotations and help instincts helped them get there.

Green, who just turned 34 years old a couple of days ago, almost certainly has some productive years left ahead of him. The biggest question is the size of the role you can ask him to play this deep into his career, and what his market will be like as he moves deeper into his mid-30s.

Frankly, a lot of this comes down to how Rivers chooses to use Green as opposed to Green's effectiveness in a vacuum. In today's ball-screen-heavy league, it can be difficult for a player to stay on the matchup and in the spot you want them to be for most of the game, but the simple act of placing Green on secondary assignments from the jump will be to both Green and the team's benefit. The attention Green demands in the corner will always add value to a team in need of floor-spacing, regardless of what big changes they do or do not make this offseason.

Is Green still a guy who should be trusted to play a starter's role on a good team? The success of Philadelphia's starting group suggests the answer is a pretty firm yes, with Green understanding his role and place in the ecosystem quite well. If the Sixers continue to try to build around the Embiid-Simmons-Harris triumvirate (or even just the Embiid-Simmons pairing), they are likely going to need to add some additional ballhandling in order to move Simmons into more of a hybrid role. Green offers the least juice in that department, so he could end up being the guy bumped from the top group to make way for a new acquisition. Even in that scenario, he seems more likely to remain as the fifth starter no matter what changes, his three-and-D profile remaining useful in almost any combination the Sixers could put together around him.

The Sixers have Early Bird rights for Green, which means they can offer up to 175% of his previous salary or 105% of the league-average salary in 2020-21, whichever number is greater, and can do so without paying any mind to the salary cap. That should make it easy to re-sign Green as long as both parties want to stick together and the offer is to Green's liking, and Green suggested during exit interviews that Doc Rivers wants him back.

"I talked to Doc, and he said, 'You know, my first initial reaction is you had a hell of a year, I appreciate everything you've done for me,'" Green said. "He goes, 'And you'll be back, you ain't going no-fucking-where,' so that's a good sign that they want me back."

That being said, Green is a reliable shooter, a good locker room guy, and a smart team player who helps teams win. Beyond his on-court value, the eventual contract the Sixers sign Green to could end up being very important in potential trade talks. Should the Sixers need to match salaries for an expensive star, having Green at a number slightly higher than it seems like he should get paid would actually be an asset.

This feels like one of the easiest decisions of the offseason to me. As long as his price tag isn't so large as to scare ownership away, you get a deal done.