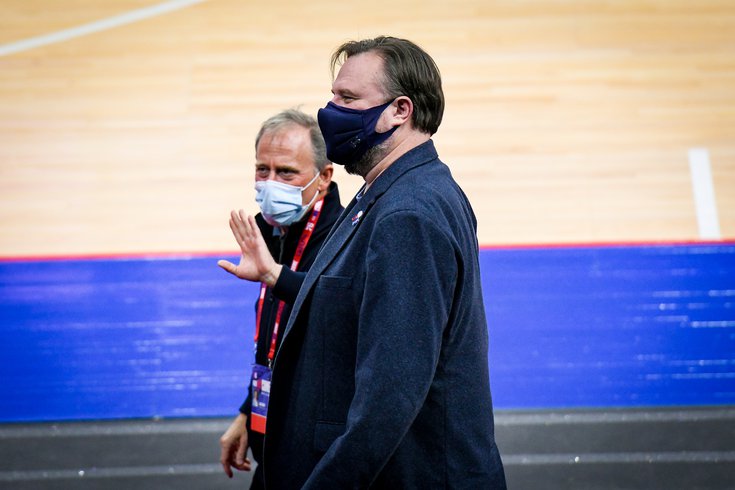 Philadelphia's spectacular failure in Round 2 was eating at Daryl Morey hard when he addressed the media Tuesday morning. By the time he eventually got to the point of discussing the Game 7 defeat on their home floor, Morey appeared in visible distress, a surprise for a guy who has been through plenty of painful playoff exits during his time in the league.

But when he was asked to come up with a reason for Philadelphia coming up short, Morey was as cold and calculated as ever.

"You want to go into the playoffs as the favorites to win the title, and we weren't. Look, ultimately you win or lose mostly with your players. It's my job to get the best players, and frankly, we didn't have quite good enough players. Now, I love how our young players are pushing our top players, I love the reaction Doc got in the locker room with everyone and the meetings he's had today, with everyone saying how they're going to improve. The reality is we need to be overall a better team with better players, and it's improvement from the players that are here and we need better players brought in. We'll make that happen."

Perhaps it says something about Morey (or just his job security) that he was willing to go to his responsibility first. Different team in a different city, but Portland GM Neil Olshey did everything but drive the bus over former head coach Terry Stotts himself as he assessed the reasons for another early Blazers playoff exit, dismissing any and all questions about the roster construction. Morey, still in the honeymoon phase of his time in Philly, has chosen to admit he can do more instead of pointing the finger anywhere else.

He's also correct. It seems counterintuitive to say the No. 1 seed in the Eastern Conference didn't have enough good players, but you simply don't lose three home games in a seven-game series if you are the better team. The seven-game series exists in the first place to reward the superior team and protect them from fluke outcomes and variance. The "better team" does not blow multiple huge leads and eventually lose the climactic final game on their home floor to end the season. Atlanta's strong close to the season under Nate McMillan should have been taken a bit more seriously with the power of hindsight.

Hindsight, mind you, is a tool the Sixers will have to use to get this thing right moving forward. Bits and pieces of their summer plans have started creeping through — Danny Green told reporters Monday that Doc Rivers insisted he will be back in a Philadelphia uniform next season — but Philadelphia's brain trust isn't quite there yet.

Hanging over everything is the question of what to do with Ben Simmons, and the Sixers will likely be choosing from a pile of bad options this summer. Hold onto him, and the situation has the chance to become even more toxic when the team returns to the floor next season, fans restless for big improvements. Trade him for pennies on the dollar, and you run the risk of the team getting worse in the short-term without the long-term upside to justify it. The needle-threading move, one that returns a star who helps you win now and forget Simmons ever existed, feels more impossible to make than it ever has in the past.

Morey was asked on multiple occasions to offer a commitment to Simmons specifically on Tuesday morning, and perhaps learning from his affirmation that Chris Paul was not leaving Houston, Morey stood behind his core of players without guaranteeing Simmons' future in Philly specifically.

"We have a very strong group we believe in. None of us can predict the future of what's going to happen in any place. We love what Ben brings, we love what Joel brings, we love what Tobias brings," Morey said. "In terms of what's next, we're going to do what's best for the 76ers to give us the best chance to win the championship with every single player on the roster...any move that will help our team win the championship, or improve our odds, we will look at and do if it makes sense to do that."

If all roads lead through Simmons, there's a clear reason why — he's the only guy you're likely to have any chance to move that can return anything to help you improve in the short-to-medium term. Tobias Harris isn't exactly going to command a big offer if he's on the trade block, and you're certainly not trading your near-MVP centerpiece who physically drags you to respectability a lot of the time. That leaves only Simmons, or at least the ideal version of Simmons, save for some creative asset management that allows Morey to bring in a lower-profile upgrade.

On the subject of exactly how they'll move pieces around the board, Morey was surprisingly deferential to Doc Rivers, leaving positional designations and team holes and things of that nature to the head coach to figure out. The long-held belief of some fans that Simmons should be treated as a power forward, for example, was pointed in the direction of the coach's office. Philosophically, though, Morey's Sixers are something of an outlier in today's NBA, an organization structured around a big man rather than a guard or wing. And his acknowledgment of how the game tilts toward perimeter players inspired a few people to wonder if he was considering a very different sort of move this summer.

But ultimately, the thing that has defined Morey during his time in the league is not adhering to analytics or the pursuit of threes at all costs, but a belief in pursuing top-end stars and figuring the rest out from there. He was more than content — admittedly in a different style of NBA — to try to build a contender around Yao Ming and Tracy McGrady. Health permitting, he very well might have, but his path to the next high-level team was through James Harden and an army of shooters. Save for a fortune dropping on him out of the sky, the most realistic path he has to a title is finding the right pieces around Embiid, because acquiring that frontline star is a lot harder than finding the good, not great guys who ultimately provide his support structure.

Mind you, changes are being made at the league level that may alter the little man vs. big man dynamic — the NBA is expected to undergo rule changes in order to dissuade perimeter players from the jumping and flailing they do to earn foul calls in today's league. Look no further than Atlanta maestro Trae Young as proof of how points of officiating emphasis could alter the league. The organizational stance appears to be that the Sixers should avoid going into this offseason (or any other) with a mindset of needing one specific thing, recklessly spending their way to get there.

"We have to make the decisions that are best that are available over this offseason with free agency, trades and the draft, and if we go in with like we have to do X, I know that doesn't work," Morey said. "You can't go in and say, we need exactly this. If you do that, you'll fail because you need a whole set of options and then pick the one that optimizes your championship odds, and I thought we did a good job, not a great job at doing that last year. We need to do a great job this offseason."

Perhaps the path to success hinges on internal development, be that from the stars or the young players just trying to solidify their spots in the rotation. Philadelphia's most meaningful change last offseason came in the form of a leap forward for Joel Embiid, and while expecting the same from Simmons, Harris, or anybody else next season is unrealistic, the right complementary player and offseason program could help facilitate that sort of growth.

Will they arrive next season as a better team than they were to end it? That remains to be seen, as does the method to even attempt doing so. The only thing that seems clear for Philadelphia in late June 2021 is that another second-round defeat, even as the No. 1 seed, is not going to cut it.

"I think you replay that game seven a bunch of times and we execute better and we win, but look, the reality is the reality, we didn't do it, and frankly, if we're squeaking by the second round that just tells me we're not, we're unfortunately not good enough, probably, to win the title. So we need to get better."