Philly has four of 10 most deadly road segments in Pennsylvania 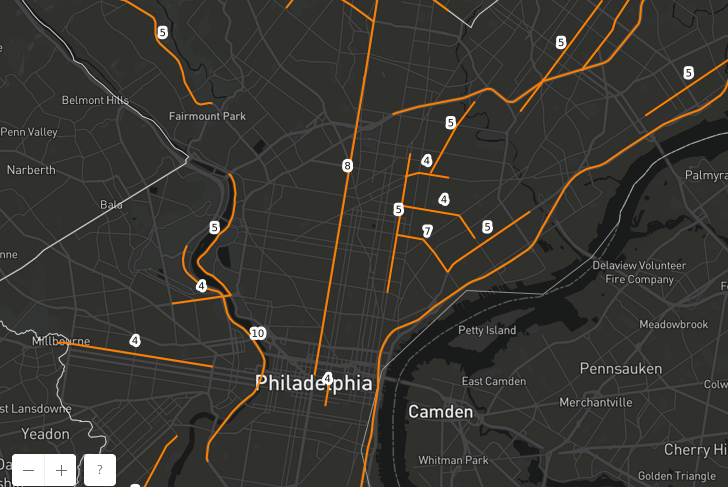 Some of Pennsylvania's deadliest stretches of road are located here in Philadelphia, according to a new study of statewide traffic fatalities.

Personal injury law firm Dallas W. Hartman P.C. collected PennDOT data on fatal car accidents throughout Pennsylvania from 2015-17. Data visualization experts from 1Point21 Interactive presented the data in a map that breaks down where each of the 3,525 deaths during that timeframe occurred.

"To identify deadly stretches, we used GIS software and applied 2.5-mile buffer around each crash," the firm said of its methodology. "Crashes with overlapping buffers were grouped into segments that ran until they encountered a section with no other crashes."

It's not a surprise that the state's largest urban center would have the greatest number of crash-related deaths, With I-95 running along the eastern border of the metropolitan area, it's almost unavoidable for such a heavily traveled, high-speed roadway to skew more dangerous, even if you assumed perfect roadway conditions.

Philadelphia accounted for more than a quarter of the road segments included in among state's most deadly during this time period. Among those with at least four fatal crashes — a key metric in how the study defines a road as deadly — 24 segments in Philly combined for 155 total fatal collisions, leading to 167 deaths. That's about a third of the deaths on Pennsylvania segments with at least four deaths from 2015-17.

The deadliest stretch in the state, again not a shock, is along Roosevelt Boulevard in Philadelphia's Rhawnhurst neighborhood.

Spanning nearly 11 miles, this segment of Roosevelt Road had more fatal crashes (26), deaths (30), and alcohol-involved fatalities (7) than any other road that we identified in our study.

Passing through Pennypack Park and the Northeast Philadelphia Airport, this stretch averaged about 38,000 vehicles daily in 2016 – a high amount of traffic, but not exceedingly high, compared to other highways and arterials in the state. Why so many deadly motor vehicle crashes occur on this particular stretch of road is something that should certainly be investigated further.

Below is a chart of the top 15 most deadly segments in the state. In addition to Roosevelt Boulevard, that includes I-95 (Delaware Expressway), the Schuylkill Expressway, a long stretch of Broad Street from City Hall through North Philadelphia, and Lehigh and Bustleton Avenues. 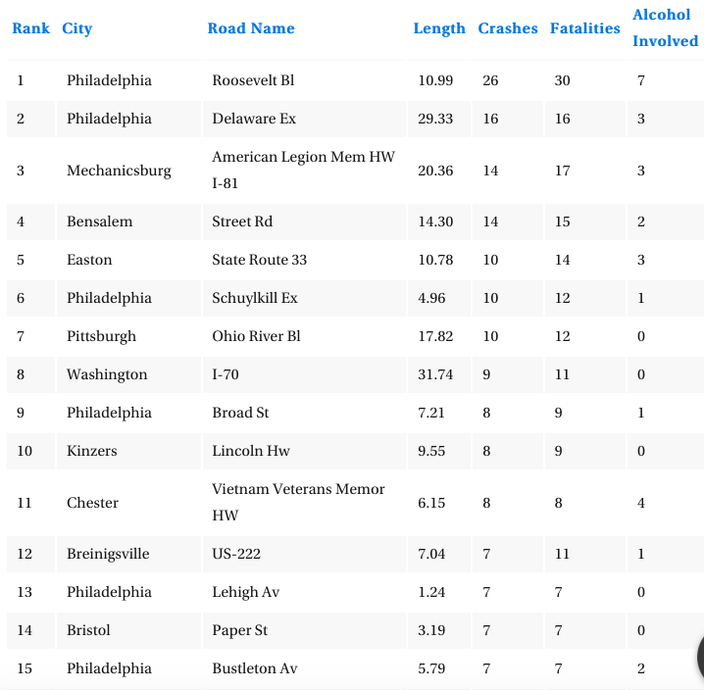 It's important to note that the study only investigated deadly car accidents. Another law firm's 2017 study of deadly intersections included all crash statistics. That investigation determined that the intersection of Grays Avenue and S. 49th Street was Philadelphia's most crash-prone corner.

Fatality rates in Pennsylvania have actually declined over the same period of time in the road segment study.

In 2017, the state recorded 1.12 fatalities per hundred million vehicle-miles of travel, which was the lowest rate ever achieved in Pennsylvania since the department started keeping such records in 1935. That was down from a fatality rate of 1.18 in 2016 and 1.20 in 2015. PennDOT's 2018 crash data aren't out yet.

You can check out the interactive segment map and other highlights from the study here.