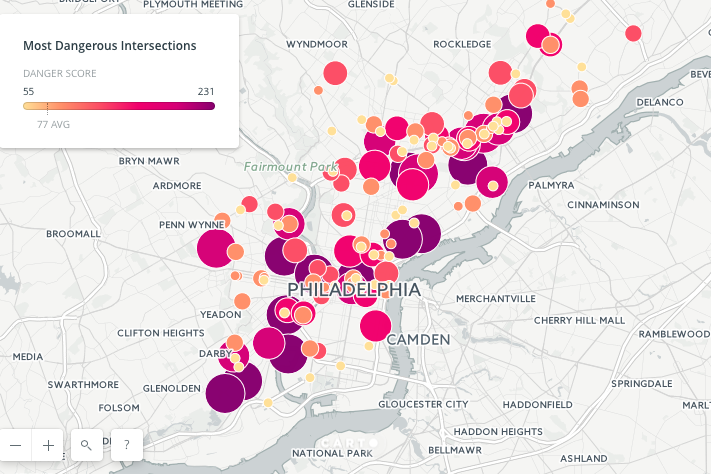 Map of dangerous intersections in Philadelphia, based on 2015 crash data.

If you were asked which intersection in Philadelphia you think poses the greatest danger of a crash, what would you guess? Odds are many of us would say it's anything that crosses with Roosevelt Boulevard, but that would actually be the second most hazardous intersection in the city, according to a new analysis Philadelphia-based injury law firm.

The study by Lowenthal and Abrams was inspired by a report from the National Highway Traffic Safety Administration that found 40 percent of the nation's estimated 5,811,000 crashes in 2008 occurred at intersections.

Using accident data from PennDOT in 2015, the study determined the 150 most dangerous intersections in Philadelphia. Pennsylvania recorded 127,127 crashes that year, including 11,544 in Philadelphia and a statewide high of 8,341 personal injury crashes within the county.

The 150 intersections identified in the map accounted for 772 total crashes involving 2,676 people in 2015. On average, each intersection was the site of 5.15 crashes, 8.35 injuries and 0.10 fatalities, with an average of 18 people involved at each one.

As a whole, the study narrowed down 43,000 Pennsylvania collision records and applied the following formula to determine Philadelphia's most dangerous intersections:

Here are the top 20 most dangerous intersections in Philadelphia.

The most dangerous intersection, Grays Avenue and S. 49th Street, involved just one crash, a stolen vehicle ramming into a SEPTA trolley. Thirty-one people were injured and one person was killed in the collision.

North Broad Street and Vine Street's 13 collisions marked Philadelphia's highest number of crashes in 2015, while Schuylkill Expressway and Montgomery Drive had the most fatalities, with three deaths in one crash.

You can check out the interactive map here.