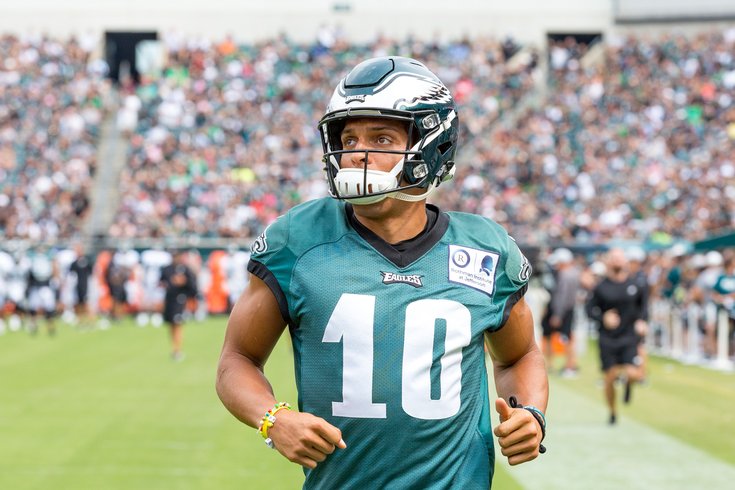 DeSean Jackson is officially back in the fold with the Philadelphia Eagles.

At a press conference Thursday morning, the veteran wideout expressed gratitude for the opportunity to return to the place where his NFL career began. With his characteristic charm, Jackson spoke of the maturity he's gained through various steps in his career — both the highs and the lows — and underscored his commitment to helping the Eagles reach another Super Bowl.

In Washington and Tampa Bay, Jackson switched from No. 10 to No. 11. He spun that into a brand of sorts, "One of One," that became his Twitter handle and the title of his podcast.

Wallets, closets and donation boxes across the Philadelphia region all lay bare the impact Jackson had in his No. 10 Eagles uniform.

The only thing standing in his way of reclaiming it was third-year wideout Mack Hollins.

Howard Eskin asked Jackson about it toward the end of the presser.

"Have you worked out your number here yet?" Eskin asked.

These things don't always go smoothly. When Clinton Portis left the Denver Broncos and joined Washington in 2004, he offered $40,000 to teammate Ifeanyi Ohalete to retain No. 26. When Ohalete was released and Portis hadn't paid him, Ohalete took Portis to court. He was ultimately ordered to pay $18,000.

In Philly, it usually gets worked out with a reasonable gentleman's agreement. In 1991, the Phillies acquired reliever Mitch Williams, whose wife had a bunch of No. 28 jewelry from his time with the Chicago Cubs. John Kruk agreed to switch to No. 29 in exchange for two cases of beer. Good man.

Which brings us to Mack Hollins, the man who took great pride in saving Philadelphia's supply of mothballed DeSean Jackson jerseys. He's looking out for us.

Got me feeling like Geico the way I saved y’all money on new jerseys. 😉 pic.twitter.com/tNYwpia1Vn