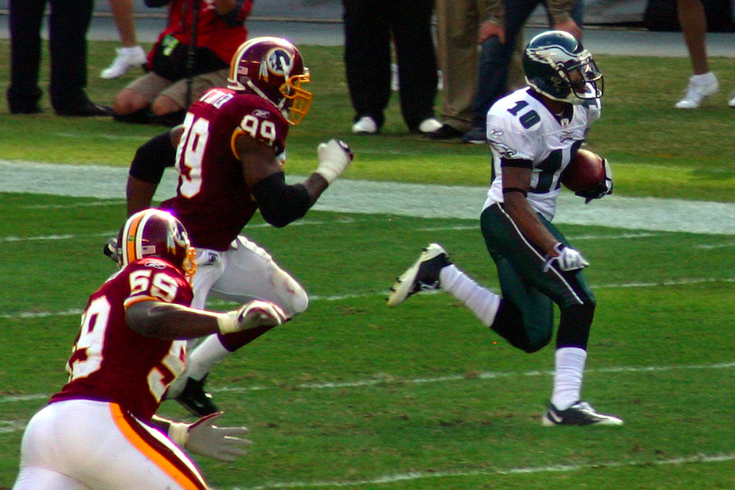 DeSean Jackson runs during a 2008 game against the Washington Redskins in his rookie season.

In a bold move, the Philadelphia Eagles are bringing back veteran speedster DeSean Jackson.

In a trade involving late round draft picks over the next two years, the Eagles worked out a deal with the Tampa Bay Buccaneers, where Jackson's role in a changing offense had become uncertain. Rumors of his eventual return to Philly persisted throughout his time there.

He's happy to be back.

"It ain't over. Gotta get back to where I started."

Jackson's highlight reel resume in Philadelphia speaks for itself. The Eagles, who were repeatedly burned by their former star during his stints with Washington and Tampa Bay, apparently saw little evidence that his game has deteriorated, even at 32 years old.

With a restructured three-year contract, it's easy to envision Jackson finishing his career in Philadelphia as a veteran playmaker similar to Darren Sproles, albeit in a field-stretching role (and with fewer injuries, we hope).

Beyond the on-field production, Jackson was an icon in Philadelphia. His departure under former head coach Chip Kelly was shrouded in controversy and left the Eagles struggling to find a comparable deep threat ever since.

Considering the Eagles managed to build a Super Bowl-winning offense without one, it will only help to add Jackson's talent to an already potent arsenal around Carson Wentz.

Here's a look at fans are reacting to the reunion between DeSean and Philadelphia.

😭 I’m so happy DeSean Jackson is back in Philly! pic.twitter.com/543ChmJF3M

Nick Foles secured a bag for himself and Desean Jackson is headed back to Philly. Feels good to be an Eagles fan today

It's hard to fathom Nelson Agholor coming back at a $9.4 million cap hit, but a celebration where DeSean Jackson and Nelson Agholor fall backwards into the endzone together would be things coming full circle. pic.twitter.com/42LKpLU4G7

There’s just too much going on in Philly sports right now. I’m still mourning the loss of Nick Foles while simultaneously celebrating the return of Desean Jackson AND Bryce Harper is still a Phillie? Like that’s not just a dream? I simply cannot handle this