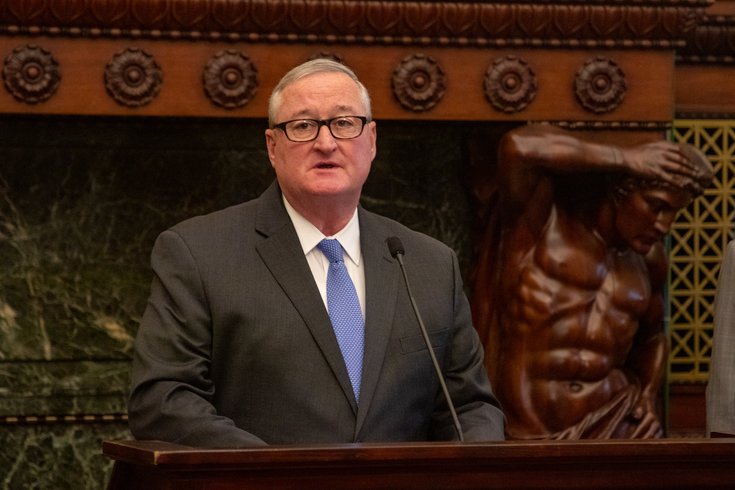 Mayor Jim Kenney urged the Pennsylvania state legislature to allow Philadelphia to enact its own gun regulations as the city approached its 500th homicide of the year, a mark that will tie the record set in 1990. Above, Kenney pictured earlier this year.

With Philadelphia nearing its all-time record for annual homicides, Mayor Jim Kenney is urging the state legislature to give the city the ability enact stricter gun control laws.

"It's terrible to every morning to get up and have to go look at the numbers and then look at the news and see the stories," Kenney said at a press conference Wednesday. "It's just crazy and this needs to stop."

Pennsylvania's firearm preemption laws, which date to the 1970s, bar municipalities from creating local gun regulations. The Kenney administration has sued the state, arguing the laws are unconstitutional, but the case is still unresolved.

Kenney said other states on the East Coast with big cities, including New York and Massachusetts, have more stringent gun laws.

New York City, which has a population more than five times bigger than Philly, has had just 427 homicides this year. Philly recorded its 499th homicide Tuesday night when a man was shot in the head on Woodland Avenue in Southwest Philly. That puts the city just one killing away from tying its all-time record, which was set in 1990 amid the crack cocaine epidemic.

The Giffords Law Center, a gun control group advocacy group, graded New York an A- and Pennsylvania a C+ on its latest firearm law scorecards.

Kenney equated the impact of guns on the city with the impact of the opioid epidemic. "Greed," he said, is what drives both the heroin trade and the state legislature's refusal to pass stricter gun laws.

Pro-gun lobby groups like the National Rifle Association have close ties to many Republican politicians nationwide which makes it difficult for gun control legislation to get through Republican-controlled bodies, like Pennsylvania's state legislature.

That's in addition to the emphasis many Republican voters place on protecting their Second Amendment rights.

In recent months, New Jersey law enforcement officials have highlighted the pipeline of weapons flowing from Pennsylvania into South Jersey, with a particular focus on "ghost guns."

Shapiro praised New Jersey for its strict gun laws and bemoaned his own state legislature's refusal to pass more stringent firearm restrictions, particularly in regard to ghost guns. Giffords has given New Jersey an A grade for having the second-strongest gun regulations in the nations.