Philadelphia police to hit the streets in plug-in hybrid vehicles 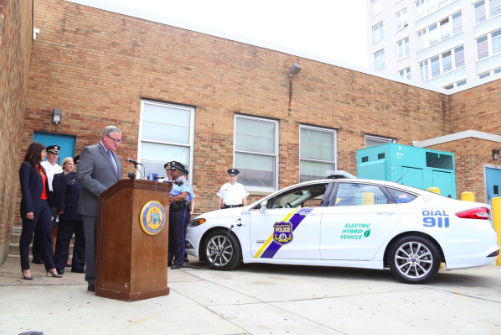 Philadelphia police reveal first of 17 new a plug-in Hybrid Ford Fusion Energis, eight of which will be used for police and another four for the Streets Department.

As part of Philadelphia's commitment to achieving energy efficiency, the city announced Monday that it has acquired 17 new plug-in hybrid vehicles that will be used by the Philadelphia Police Department, the Philadelphia Streets Department and other agencies for miscellaneous purposes.

“I am committed to modernizing this government,” said Kenney, “particularly the equipment and resources available to the men and women of the Philadelphia Police Department. What we are showing today is an important step in a larger effort to expand the city fleet of alternatively fueled vehicles and equipment over the next few years.”

In the long-run, the city plans to have a hybrid community relations vehicle assigned to each police district. By January, 17 plug-in hybrids will be in use by eight police districts and the Sanitation Enforcement Division of the Philadelphia Streets Department. The remaining five will be used for a variety of municipal purposes.

“I’m thrilled to see these new vehicles assigned to our Districts, where community outreach is so vital,” said Deputy Commissioner Coulter. “The fact that the cars are energy efficient is also vital, since our Department’s, and the City’s, resources are always stretched thin. This is a great addition to our fleet.”

On a full charge, the Ford Fusion Energi can travel 22 miles before the gas engine kicks in, offering an equivalent of 97 miles per gallon. The city will install charging stations for each police district where the plug-in hybrids are assigned.

“This really is just the beginning of the city’s expansion of our hybrid fleet, which currently includes about 200 standard hybrid vehicles and 3 plug-in hybrids in use in other departments in the City,” said Rebecca Rhynhart, Philadelphia's chief administration officer charged with leading modernization efforts. “We have electric Zambonis in Parks & Rec, electric motorcycles in the Fire Department, and we’ll be ordering waste haulers that run on compressed natural gas. So there is much more to come.”

The United States leads the world in highway-capable, light-duty plug-in electric vehicles, with more than 506,000 on the road by the start of 2016. A variety of state and federal incentives are available to encourage the expansion of the U.S. fleet among consumers and commercial buyers, as well as further develop the nation's charging station infrastructure.