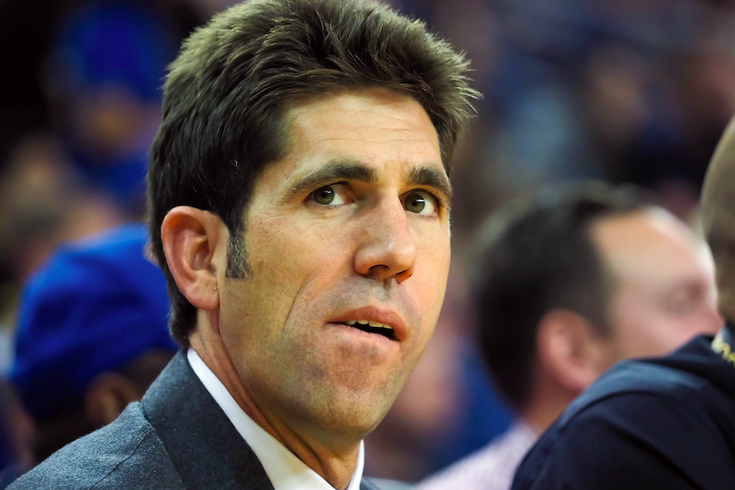 Golden State Warriors general manager Bob Myers on the sideline before the game against the Dallas Mavericks at Oracle Arena in Nov. 2016.

The Philadelphia 76ers bounced back in a big way in Game 2 of their series with the Brooklyn Nets, temporarily restoring confidence in the moves that got them to this point.

It wouldn't be the Sixers without a little bit of drama and back channel discussion going on, though.

A report Tuesday from The New York Times' Marc Stein claims the Sixers attempted to lure Golden State Warriors general manager Bob Myers to Philadelphia in the wake of the Bryan Colangelo scandal. The context for this was a discussion of the Lakers' current predicament after Magic Johnson stepped down as team president last week:

The 76ers tried to stage their own such coup last summer after the Bryan Colangelo Twitter scandal. As The Times reported last July, Philadelphia made an ambitious attempt at trying to hire Daryl Morey away from Houston — and I’m told Philly also commissioned a clandestine run at prying Myers away from the Warriors that was likewise rebuffed.

And here we thought we had only struck out on Morey, LeBron James and Paul George?

Landing an executive like Myers would have been a major acquisition for the Sixers, but it was probably a moonshot they knew stood little chance. They could have done a lot worse than Elton Brand, who has already shown he's willing to be an aggressive risk-taker.

The Myers report comes just as an explosive piece from the New York Daily News' Chris Sheridan being heavily scrutinized. Sheridan claims, among other things, that Brett Brown is all but done here and Elton Brand sought to trade Ben Simmons (who allegedly faked a stomach virus under Brown's cover). The response from Sixers VP of communications Dave Sholler sums it up best.

This is one of the most irresponsible hack jobs I’ve ever seen in more than a decade of working in sports. Factual inaccuracies, made-up stories, and references to convos that never happened. This is a steaming pile of trash. Steaming. Pile.