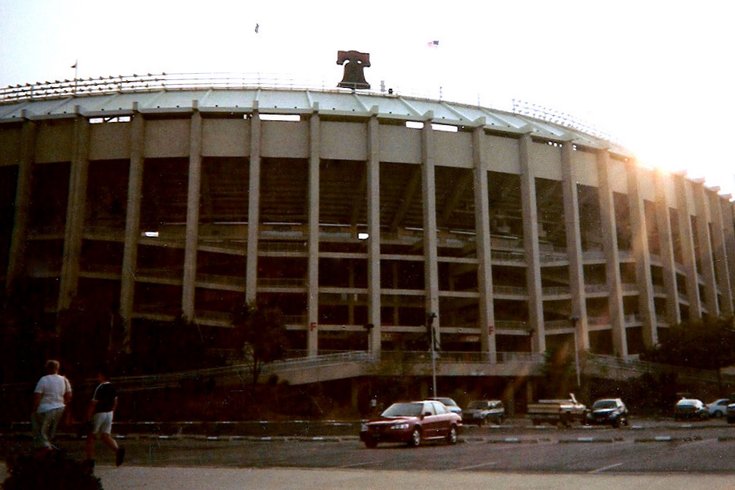 It seems hard to believe, but 15 years have passed since Philadelphia said goodbye to Veterans Stadium, where the Eagles and Phillies spent decades thrilling and destroying our souls.

In its latter days, the Vet was routinely disparaged as a junky building that served as a hive for bad behavior. Its reputation was centered around notorious moments — the snowballs, the courtroom, the turf, a Barry Bonds brawl — that overshadowed its charm.

In 1964, Philadelphia voters approved a $25 million bond to construct Veterans Stadium. It was an investment that arguably cemented the city's status as a sports town after former franchises like the Athletics and Warriors skipped town. Cost overruns required another $13 million bond in 1967, and at a total cost of $60 million, the "octorad" style stadium was among the most heralded of its time.

These days, few people would trade Lincoln Financial Field or Citizens Bank Park for the Vet. It's nice having separate stadiums for the Eagles and Phillies, and both teams have won championships since they moved to their new buildings.

But it's impossible not to feel a bit nostalgic every time memories of Veterans Stadium come to light. Here's a look at some of Twitter's best reactions (and a few extra videos, for sentimental purposes) to the 15-year anniversary of the Vet's demolition.

15 years ago to the day. I thought the dress code called for black tie at 7am for the implosion, but now I see I may have been on my own there! I think this qualifies for a #tbt...Can't wait to see everyone in just one week! pic.twitter.com/x3UVBPzgWM

TBT. 15 years ago today, March 21st, 2004. Veterans Memorial Stadium was demolished. I saw many a game and a few concerts there. pic.twitter.com/rjatK0kQot

@jasonmyrt @AnthonyLGargano @975TheFanatic @975Middays fun fact for you guys. Today is the 15th anniversary of the implosion of Veterans Stadium. 3/21/04 pic.twitter.com/G10oGmpR3Q

I was annoyed by the local and national media's commentary that day, mocking the Vet and celebrating its destruction. It was a dump, but I loved that place and so many of my core memories were formed there. As a Philadelphia sports fan, Veterans Stadium is a big part of my story.

Today’s first take: it’s been 15 years to the day since Veterans Stadium was imploded. That place was a dump, yes, but it was our dump. The greatest venue ever to watch a sporting event was the Vet. Period. Change my mind.

EMOTIONAL MOMENT: It took four years to build Veterans Stadium and 62 seconds to implode it on this date in 2004. So many fond memories. (Phillies photo) #phillies pic.twitter.com/9DVY0rKhLY

15 years ago today, Veterans Stadium (aka The Vet) in Philadelphia was imploded. It is now a parking lot. #FlyEaglesFly #RingTheBell pic.twitter.com/kcQaqNeE5c

Veterans Stadium organist Paul Richardson with Take Me Out to the Ballgame with some scenes from The Vet pic.twitter.com/9rwKJPX047

For good measure, here is some guy waving a flag on a fishing pole at Veterans Stadium following 9/11. pic.twitter.com/OXGSk9Iymy

I was 6 and remember sitting with my family early in the morning to watch it. We could even hear it from our house which was pretty cool. The #Vet was mostly before my time as a fan but its absolutely iconic #Philly #VeteransStadium https://t.co/CmRNgg0uaf

I remember watching Kevin Millwood pitch a no hitter live at Veterans stadium. The only reason i remember that is because it was so boring. We beat the Giants 1-0. I swear this is off the top of my head

#TBT September 29th, 2002. Veterans Stadium. #Eagles - 35, #Texans - 17. Also known as the @BrianDawkins “Quadrafecta” game...where he became the 1st player in NFL history to record a sack, interception, recover a fumble, and a touchdown reception in a single game. #FlyEaglesFly pic.twitter.com/pS3Eit3tXG

#TBT October 10th, 1999, Veterans Stadium. Doug Pederson leads the #Eagles to a come from behind victory against the Cowboys, 13-10. @BobbyTaylor21 ices the game with a pick. @Ike58Reese and the rest of his team fired up for Andy Reid’s first win as a head coach! #FlyEaglesFly pic.twitter.com/xIhLiEC9DV

July 1, 1986: The Great American Bash tour kicks off in Philadelphia at Veterans Stadium, headlined by @RicFlairNatrBoy vs Hawk for the NWA World Title

On this date in 1999. Carlos Santana guested w/ Dave Matthews Band at the since demolished Veterans Stadium in Philly. Watch his killer solo:

I was there that weekend and this performance blew me away..... pic.twitter.com/OF7NsBcv0k

OTD 1981
• '80 NFC CHAMPIONSHIP •
In a frigid 12°F at a frenzied Veterans Stadium, RB Wilbert Montgomery thrashes the Cowboys to the tune of 194 yards and a TD as the #Eagles topple Dallas, 20-7, to advance to their first Super Bowl.https://t.co/vo6JetGVmA pic.twitter.com/Co5ohQOlww

Chase Utley was destined to be great from his first ever MLB hit.