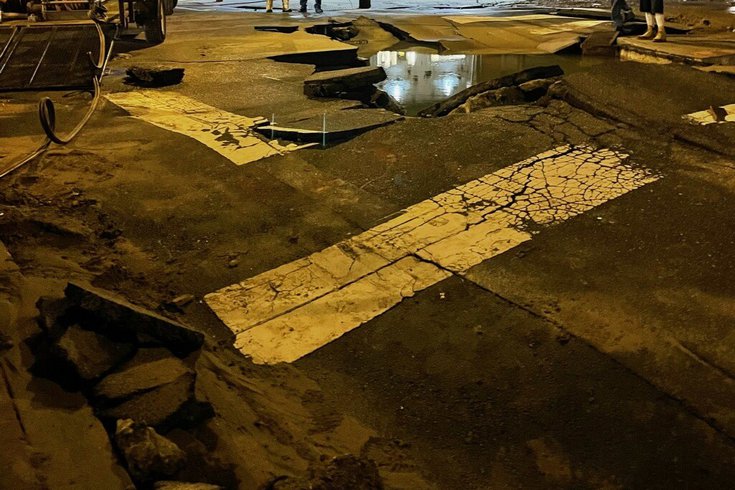 Crews with the Philadelphia Water Department responded to a 30-inch water main break at South Sixth and Bainbridge streets just after midnight Sunday, July 25, 2021. Water rushed from the ground, flooding streets and basements in the Queen Village neighborhood.

A video posted to Reddit shows water rushing up from the ground like a miniature geyser at South Sixth and Fitzwater streets. Another video shows floodwater creeping down a block in Queen Village and pooling up near someone's doorstep.

Members of the r/Philadelphia subreddit reported low water pressure from South 13th Street and West Oregon Avenue all the way to South Second and Lombard streets.

"Came on here just to check if anything was up when my sink wouldnt turn on more than a trickle," one user wrote. "Guess that explains it!"

Others chose to look on the bright side.

"Once in a lifetime waves right there. Grab your board and take advantage of it," another user wrote. "Vaya con Dios."

The Philadelphia Water Department responded to the break around 12:30 a.m. and began shutting down the main at 1 a.m., according to spokesperson Brian Rademaekers. Fire officials, members of the Office of Emergency Management and other utilities workers were also sent to the area to help with damage assessment.

By 3 a.m., one Reddit user said flooding had subsided at Sixth and Fitzwater. Video from the scene around 7 a.m. showed mud covering Bainbridge Street and a large hole in the middle of the road where it intersects with Sixth Street.

Neighbors told Beccah Hendrickson with 6ABC that the water was nearly 4 feet high at some points, busted through basement windows and caused extensive property damage. One woman who spoke with 6ABC said she is an interior designer and collector and lost an estimated $1 million in damaged art and furniture.

Rademaekers said the water department is hiring crews to dry out and clean basements that were flooded. Anyone who needs help doing so should call 215-685-6300.

"The goal is to visit every property which needs water pumped out," Rademaekers said.

Normal water pressure should be restored to affected residents, but fixing the 130-year-old main will be a "long-term repair," according to Rademaekers. South Sixth Street between South and Fitzwater streets will remain closed to vehicle traffic until further notice.

"Assessment of needed repairs will begin as soon as crews can safely do so," Rademaekers said. "We are coordinating with impacted utilities and City agencies to ensure the water main break and street can be repaired as quickly as possible."

Anyone still experiencing low water pressure should call the department's emergency hotline at 215-685-6300.