The Ankole-Watusi, a gentle and domesticated breed, can weigh up to 1,600 pounds 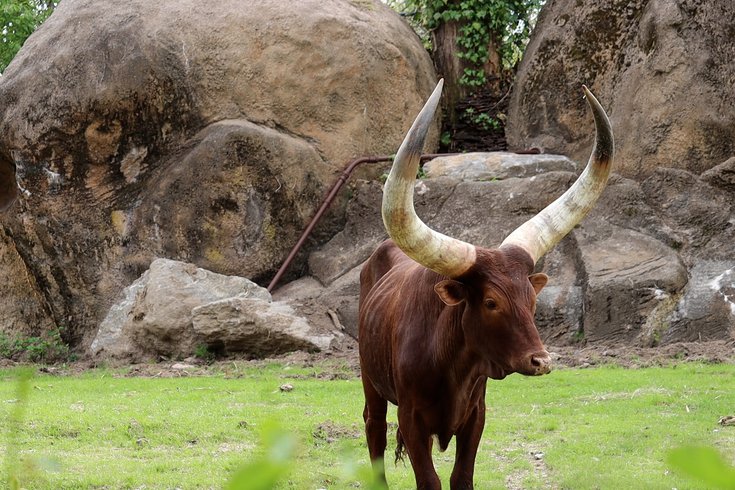 The Philadelphia Zoo added three Ankole-Watusi cattle, a African breed known for its enormous, crescent-shaped horns, to its African Plains exhibit. The image above show one of the new animals.

For the first time in its 163-year history, the Philadelphia Zoo is home to a distinctive breed of African cattle – the Ankole-Watusi – that stands out from the typical herd due to its huge, curved horns.

The three new gentle giants, natives of East Africa, are the descendants of an ancient breed of Egyptian longhorns that lived in the Nile Valley around 4000 BC. They were considered sacred animals and generally only used to supply milk, not meat. That custom has largely survived today in their current domesticated status as livestock.

The animals will live on the African Plains exhibit, and the zoo shared video of the trio of newcomers on Wednesday.

We're THRILLED to introduce you to the newest trio on African Plains: our Ankole cattle! 🌟 This incredible breed, native to Uganda, is best known for its massive horns, which can grow to be 37-40 inches long and measure up to 8 feet wide. This is the first time in our 163 year history this breed has lived at the Zoo, and we want your help choosing their names! Learn about how we came up with the options and pick your favorite (we'll announce the winners on Monday, May 16!): philadelphiazoo.org/name-our-ankole-cattle/

The long, lyre-shaped horns on Anokle-Watusi cattle can each measure up to 40 inches long and weigh as much as 15 pounds by the time the animals reach full maturity. The adults weigh between 1,200 and 1,600 pounds. 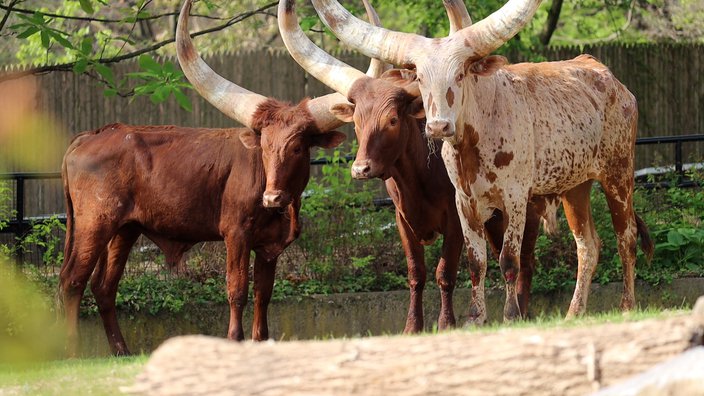 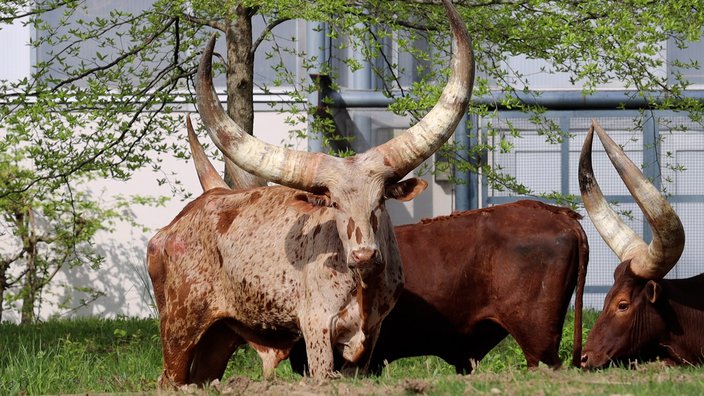 Ankole-Watusi are one of several regional strains of African long-horned cattle and are found in Uganda, Rwanda, Burundi, Congo and parts of Tanzania. They're associated with the Banyankole and Tutsi cultures, while other Ankole breeds are connected to the Bahima, Ankole and Kivu cultures.

Ankole-Watusi are known for their ability to endure long draughts and are considered status symbols among herders in Africa. They don't produce much milk during lactation — only about 1 liter per day compared to the 20 liters produced by conventional dairy cows — but they have a sweet, affectionate nature with people and are fiercely protective of their calves, protecting them from predators.

The Philadelphia Zoo is inviting the public to help name its new Ankole cattle, selecting between two possible names for each animal.