After Phillies' comeback win over Mets, fans are buying up the entire city's supply of bamboo 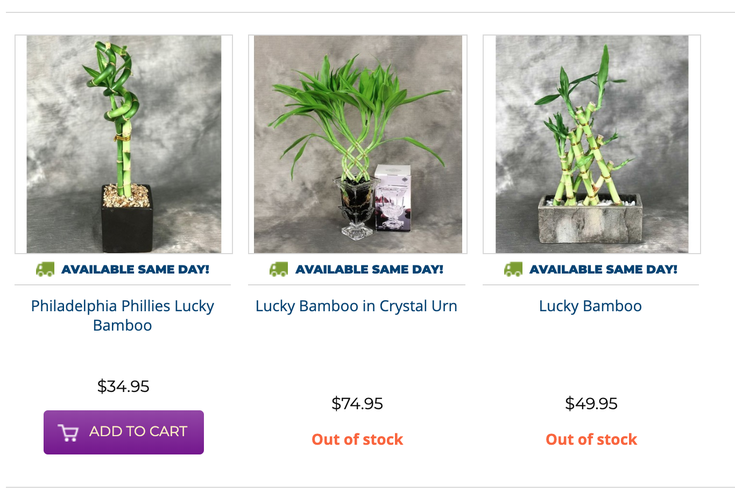 Kremp Florist, in Willow Grove, has sold out of two different lucky bamboo plants and is now offering a third Phillies-themed bamboo product.

Welcome to late June. The Philadelphia Phillies are obsessed with plants.

If you buried the Phillies after they lost seven in a row and generally looked awful, you can't be blamed. But you've missed one of the more pleasant turn-around stories this week. Here's a quick catch-up: Brad Miller, the newest Phillies acquisition, bought a lucky bamboo plant in Chinatown on Monday morning, before the team began a four-game series with the Mets, and brought it to the clubhouse.

Incredibly, the lucky bamboo seems to have fixed the Phillies: They just finished a four-game sweep of the Mets, including a miraculous comeback win over New York in the bottom of the ninth inning on Thursday.

Some people bought in before Thursday's win, which meant they could celebrate Jean Segura's walk-off homer with their tall, green friend:

Celebrated the @Phillies #walkoff #win today on @SEPTA with some fellow Phans!! @SEPTAPHILLY Waitta go @Jeansegura02 And came home to watch the Braves LOSE sitting next to my #Bamboo!! pic.twitter.com/qcm20EMy3N

The succulents got me as usual so I just spend $50 on plants. Btw the bamboo was only $13 at Lowe’s. I hate myself. pic.twitter.com/bNvFUzvjcE

Others finally kowtowed to the bamboo's obvious life-changing abilities, and began searching for some bamboo in the area:

Can I get Bamboo off Amazon?

You can always take the Brad Miller route and try to find some lucky bamboo in Chinatown, though prices might be inflated now that its powers have been revealed to Philadelphia residents.

Kremp Florist, a flower and plant shop in Willow Grove, has sold out of two different types of lucky bamboo and is now selling a third lucky bamboo product, appropriately called "Philadelphia Phillies Lucky Bamboo". Kremp is offering same-day delivery, for Phillies fans who don't want to get their bamboo after the streak is inevitably snapped.

Elsewhere online, the bamboo's cult is growing. There is, because there always is, now a Brad Miller's Bamboo-themed Twitter account, which has somehow amassed 100 followers:

I cannot believe it!!!! Bamboooooo

Pictures, and videos, of the team's official bamboo plant are turning into social media sensations:

The Bamboo is hittin the road with the Phillies 🎍

And, yes, this really is all happening because of four wins in June.

One thing's for certain: When Philly sports fans lean in, they lean all the way in:

Early 2018 saw a large spike of dog masks shipped to Philly. Now in 2019 bamboo plants are in high demand. What will be the 2020 item i wonder 🤔 #phillies #bamboo

If you're anywhere near Chinatown in the next few days, you're going to want to keep your wits about you. Phillies fans are in a good mood, and they're coming for all the bamboo.