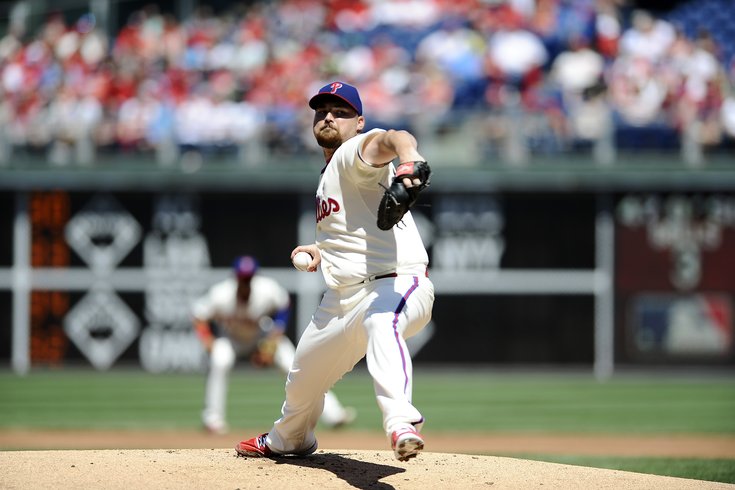 Wilson Ramos drove in what would be the winning run in the 10th inning with his second RBI of the day, and the Washington Nationals defeated the Philadelphia Phillies 4-3.

Bryce Harper homered and Clint Robinson had three hits Sunday for the Nationals, who salvaged a win in the three-game series.

Darin Ruf homered and Cody Asche had three hits and an RBI for Philadelphia.

Yunel Escobar led off the 10th with a double off Jake Diekman (0-1). Harper was asked to sacrifice bunt but failed in two attempts before his groundout moved Escobar to third.

Justin De Fratus replaced Diekman, but his first offering to Ryan Zimmerman was a wild pitch, allowing Escobar to score to put Washington up 3-2. Ramos' RBI single later made it a two-run game.

Drew Storen walked the first two batters in the bottom of the 10th, and the Phillies got within a run on Odubel Herrera's two-out infield single. But Zimmerman made a diving stop on Cesar Hernandez's grounder and flipped to Storen for the final out, giving Storen his second save in as many chances.

Aaron Barrett (1-0) pitched a scoreless ninth with a pair of strikeouts for the win.

Prized offseason acquisition Max Scherzer wasn't as sharp as opening day for Washington and had to settle for another no-decision. Scherzer left with the lead after allowing one run on six hits in six innings with eight strikeouts and two walks.

Ruf greeted reliever Xavier Cedeno with a drive to left to lead off the seventh for his first career pinch-hit home run, which tied the score at 2-2.

Philadelphia's Sean O'Sullivan, called up from Triple-A Lehigh Valley before the game to make a spot start, gave up two runs on five hits in six innings. He walked five and struck out two.

Harper's opposite-field shot with two outs in the first staked the Nationals to a 1-0 lead. It was the second homer of the season for Harper, who had been 1 for 11 with seven strikeouts in his last three games.

The Nationals tacked on a run in the fourth on Ramos' sacrifice fly.

The Phillies got their lone run off Scherzer in the fifth on Asche's RBI single.

Ryan Howard went 0 for 4 with four strikeouts. He stranded six runners, including two in scoring position, and was replaced at first base by Ruf in the eighth. Howard was booed after each of the last three strikeouts, with the volume increasing for each one. He is batting .150 with seven strikeouts in 20 at-bats this season.

Nationals: OF Jayson Werth (shoulder) could rejoin Washington for Monday's game against Boston. Werth didn't play Sunday at Single-A Potomac, where he homered in the first game of a doubleheader Saturday during a rehab start.

Phillies: OF Domonic Brown (Achilles) homered Sunday during a rehab start with the Phillies' Single-A team in Clearwater. Brown is scheduled to rejoin the Phillies in 2-3 weeks.

Phillies: RHP Aaron Harang (1-0, 0.00) looks to extend his recent success against the Mets in New York's home opener Monday. Harang went 2-1 with a 0.90 ERA in three starts against the Mets last season with the Braves. Reigning NL Rookie of the Year Jacob de Grom (0-1, 3.00) starts for New York.