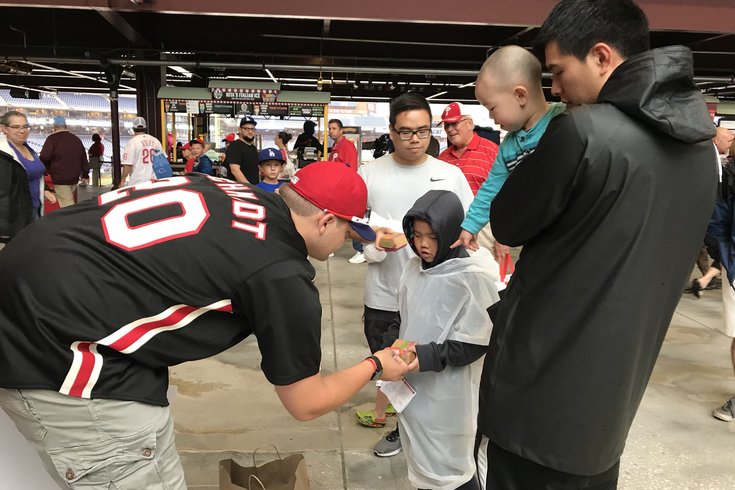 Damon Miller Jr. follows through on his bet to give everyone free chicken nuggets after Rhys Hoskins hit another home run.

He directed his wager at the Phillies' official account.

Well, as he is wont to do, Hoskins hit a home run.

Feel free to deliver those nuggets whenever you get a chance. https://t.co/sK24nX5UEC

Although the Phillies teased Miller a bit on Twitter about him following through, the team pulled off a nice little stunt by paying to have him hand out 50 boxes of McDonald's Chicken McNuggets at the first base gate at Citizens Bank Park on Tuesday night, most of which went to little kids, according to Miller.

John Stolnis of The Good Phight chatted with Miller, who said his dream was always to play for the Phillies.

That never happened, obviously, but he did get to hand out nuggets, and he got some pretty great seats.

Shoutout to the @Phillies for hooking me up with amazing seats. Thanks again for everything! @RhysHoskins22 Good luck today and hit a bomb! pic.twitter.com/NYRQB1HONS

And he even caught a ball from the man whose baseball prowess led to his good fortune:

CAUGHT A BALL FROM @RhysHoskins22 @Phillies THIS IS CRAZY pic.twitter.com/IXgGdzebZV

And the Phillies won, in large part thanks to Hoskins. Not a bad night.