In all of Major League Baseball, perhaps there isn’t a more important wildcard heading into the July 31st trade deadline than the Phillies’ murky front office situation. When Jonathan Papelbon spoke before the All-Star Game about pots and the like, he understandably sounded confused about how the Ruben Amaro, Jr./Pat Gillick/Andy MacPhail dynamic actually is working behind closed doors during the latter’s three-month orientation. More or less, this is what the closer was insinuating: 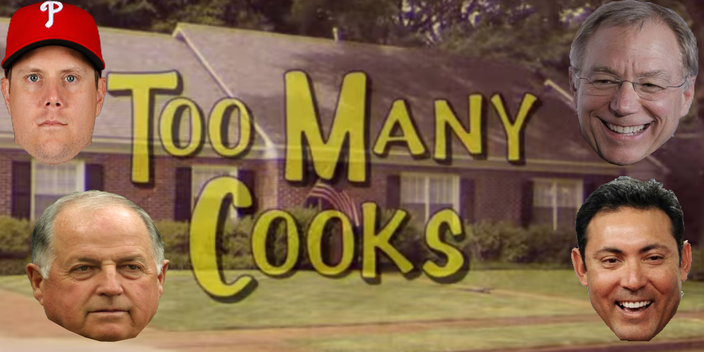 In an interview with the 94 WIP Morning Show on Tuesday, Amaro basically said, “You know nothing, Jon Paps!” and tried to clear things up. Here is the exact quote:

“I’m the GM and Pat is my boss. As in all these deals, particularly ones that are as complicated and have so much money involved, these are all discussions that we've had. When I was with David Montgomery, same thing. These are decisions that aren't made unilaterally. I don't walk into a discussion and just make a deal. It's something that's discussed not just with me, but also with my boss. And that's the same structure that we have right now. Right now, Andy is part of the decision-making process, but only in so much that he's an observer and someone who's going to give us his opinion. Really, Pat is the one that ultimately will make the ultimate decisions."

The Phillies have explained their temporary front office structure sufficiently a few times already, but it still seems problematic from the outside. Mainly, that is because MacPhail, who supposedly has the least power in the group, is the guy who is most important to the Phillies’ future. He is the one that will have to deal with the aftermath of whatever the Phillies do at the deadline.

On the other hand, Amaro and Gillick have gone through the entire process of trying to trade Papelbon and Cole Hamels. MacPhail was out of baseball when those two men were working the phones and in constant communication with other teams, so it makes sense that they’re still prominently involved as the moment of truth approaches. Last week, ESPN’s Jayson Stark reported that Amaro was overruled after getting close to trading the irascible closer.

Papelbon is small potatoes compared to Hamels, who could theoretically bring back the type of haul that helps jump-start the Phillies’ massive rebuild in earnest. Throw in another top prospect to pair with the Franco/Nola/Crawford triumvirate and what is looking more and more like the top overall pick in next year’s amateur draft, and the Phillies would have a solid base of young talent to start building with. Nailing any Hamels deal is absolutely crucial, though, a point we have all seemingly been over again and again.

Recently, the idea that the Phillies might hang onto their 31-year-old ace has gained some steam. Stark went on 97.5 The Fanatic on Wednesday afternoon and put the odds at less than 50/50 that a Hamels deal gets done in the next two weeks after talking with members of other front offices. Here is part of what he had to say, a theory hatched by another executive at the All-Star Game:

“Here’s what one guy said to me: He thinks that whether or not Andy MacPhail is making this deal is irrelevant. Here’s the thing to remember: Whenever the smoke clears, this is going to be on Andy. He’s the one who is going to have to deal with the aftermath of this trade, whether Ruben makes it, Pat Gillick makes it, he makes it, or some combination of that group makes it. Sooner or later, Pat is going to be gone, we think Ruben is going to be gone, and Andy is still going to be here. So Andy may not make the trade, but he’s going to weigh in heavily and what’s he going to want?”

As Stark went on to mention, MacPhail has been in this situation before and passed with flying colors. When the 62-year-old president-elect was guiding the Orioles in 2008, he acquired Adam Jones, Chris Tillman, George Sherrill, Tony Butler, and Kam Mickolio in exchange for lefty Erik Bedard. The Orioles’ recent run of success owes a ton to that single transaction.

If an offer doesn’t blow MacPhail away, will he vote to pass on trading Hamels and try to hit another home run later when he has full control? How much weight does that opinion truly carry at this stage of the game? Better yet, how much should it?

We may never 100 percent know the process behind how the cooks are collaborating in the kitchen, but a decision is coming soon. One thing is for sure: Hamels and Papelbon hope they’ll be somewhere other than Philly.