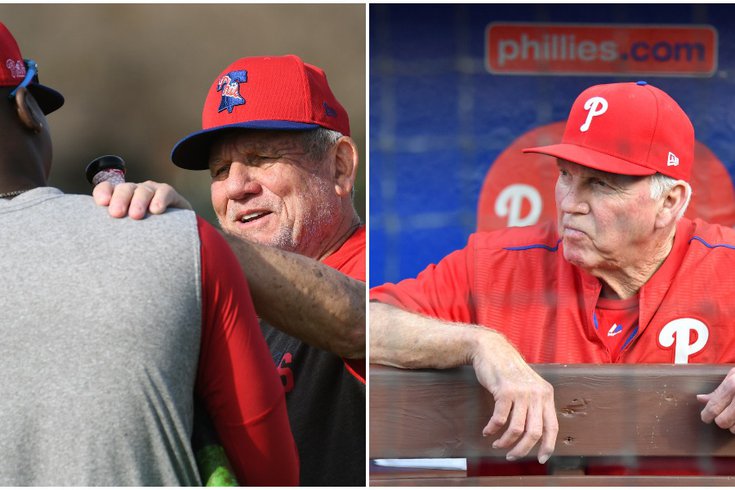 'Down the Line with Charlie & Bo' will feature Larry Bowa and Charlie Manuel sharing stories from their baseball careers, interacting with fans across the Philly region and having conversations with friends and former teammates.

Larry Bowa and Charlie Manuel, two men who are universally beloved by Phillies fans, have come together for a new TV show that features both legends doing what they do best: talking baseball.

"Down the Line with Charlie & Bo" is a brand-new TV show that will consist of Bowa and Manuel sharing stories from their baseball careers, interacting with fans across the Philly region and having conversations with friends and former teammates.

The show's first episode premiered this week, and episodes have already been shot in locations such as the Philadelphia Art Museum, the Philadelphia Navy Yard, along Broad Street near City Hall and the Ocean City boardwalk, according to the Inquirer.

The idea of possibly doing a television show together originated during the shortened 60-game season in 2020 while both men watched Phillies games at an empty Citizens Bank Park, Bowa said to the Inquirer.

“Charlie and I talked a little bit about doing something last year when we were upstairs watching games [at Citizens Bank Park],” Bowa said. “It was more of a get into some kind of lounge and have a question-and-answer session with fans, but we wanted it to go further than that. We wanted to go out in the city and explain how he came from Virginia and I came from California and we both sort of connected with the city. And we just kind of wanted to share our baseball experiences and mix it up with the fans.”

Bowa and Manuel first met more than 50 years ago in an instructional game that both were playing in, according to the Inquirer. Bowa was a Phillies prospect at the time while Manuel was making his way through the Minnesota Twins' farm system.

Both men began working together in Philadelphia in 2003, when Bowa was the manager of the club and Manuel was hired as an adviser to former general manager Ed Wade.

But their relationship really took off in the last few years after Bowa became an adviser to the front office in 2018, working alongside Manuel. Their relationship grew as they traveled to minor league ballparks and coached prospects in the Phillies' farm system.

“We talk baseball no matter where we are at,” Bowa said to the Inquirer. “We could be at dinner with our wives, we could be up in the box, we could be driving in our car...we talk baseball. People don’t understand the love of the game we have. I don’t think there are two people that love this game more than Charlie and I do. It wears on us when we play lousy. We’re happy when we play good. When we see sloppy play, we get upset. We talk about our prospects.”

It’s all about technique, balance and rhythm pic.twitter.com/MR6TLxZsNV

Manuel managed the Phillies from 2005-2013, a nine-year run that was highlighted by the 2008 World Series title, the 2009 National League pennant and five straight NL East division titles and postseason appearances from 2007-2011.