Bryce Harper is "Harp", Rhys Hoskins is "Big Fella", and the rest of the lineup's nicknames 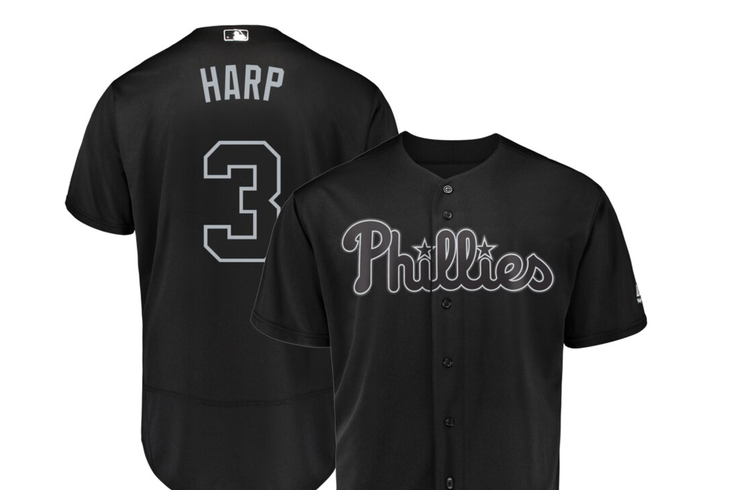 The Bryce Harper version of the Phillies' 2019 Player's Weekend uniforms.

The three-day, league-wide event involves new custom uniforms, and allows players to put nicknames on the backs of their respective uniforms instead of their last names Sometimes, like Rhys Hoskins' "Big Fella" jersey last year and this year, the results are pretty fun. Occasionally, like Jason Vargas's "Vargy" this year, they're uninspired. It's always something to talk about.

This year, the jerseys are monochrome, either all-black or all-white, depending on which team is home and which team is on the road.

The Phillies will wear all-black uniforms, which kind of look cool but also kind of don't:

The Phillies will wear these all-Black uniforms with nicknames on the back on August 23-25 in Miami for the annual Player’s Weekend. pic.twitter.com/mVeAUIghHB

They're extremely reminiscent of the all-black and all-white uniforms the Miami Heat wore during the Big Three era, which I thought were cool at the time but look absolutely brutal in hindsight.

Here's a sneak peak of some more nicknames, in jersey form:

Some of the Phillies nicknames for Player’s Weekend. pic.twitter.com/v37iiQwwAK

Suarez's has to be the worst of the bunch. It's just his last name. C'mon, man.