Including 'Big Fella' and 'Bigger Fella,' and more baseball fun 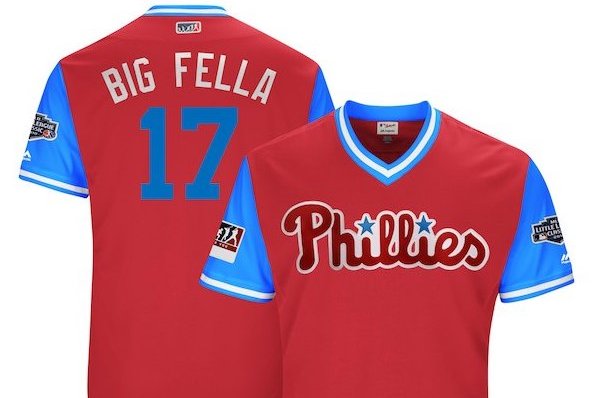 Major League Baseball, always striving for eyeballs in an increasingly NBA- and NFL-first world, is celebrating its second annual Players Weekend from Aug. 24-26, and the new jerseys — plus, more importantly, the new nicknames — have arrived.

If you missed it last year, the best part of Players Weekend is players putting their nicknames on the back of their jerseys.

Some are obvious – just plays on their names – while others are a little more involved.

Let’s take a look at a few of the Phillies' standouts and evaluate them.

A nice call-and-response showing from Hoskins and Hunter! This is what teamwork looks like. I wonder who biggest fella would be…

Jake and snake rhyme, that much is clear. But calling yourself a snake in 2018, the era of snake-as-disparaging-slang, sure is bold.

One of the newest Phillies, Ramos has been called the Buffalo for years. Back in 2015, he explained where it came from:

“’I got that nickname by Ian Desmond,’ Ramos said. ‘It was one day at the stadium and he said to me, ‘Hey, you get a lot of hits (foul tips, collisions, etc.) every day behind the plate and you never go out of the game. You stay for the whole game. You’re a big man. You’re like a buffalo!’’”

I will be honest, I cannot explain why Aaron Loup’s nickname is Wolf.

This is a great nickname, because baseball is by far the slowest-paced of the four major sports in the United States, and Mr. Knapp is leaning into it. He might not want to emulate his nickname when he’s playing, though: everyone tries to figure out when the catcher is napping.

Pat, that is just your last name.

Once again, a great display of teamwork here from Franco and Garcia, and this time in a different language. “Compa” is colloquial Spanish for “friend” or “buddy,” which makes this doubly endearing.

You can check out the full list of nicknames here.