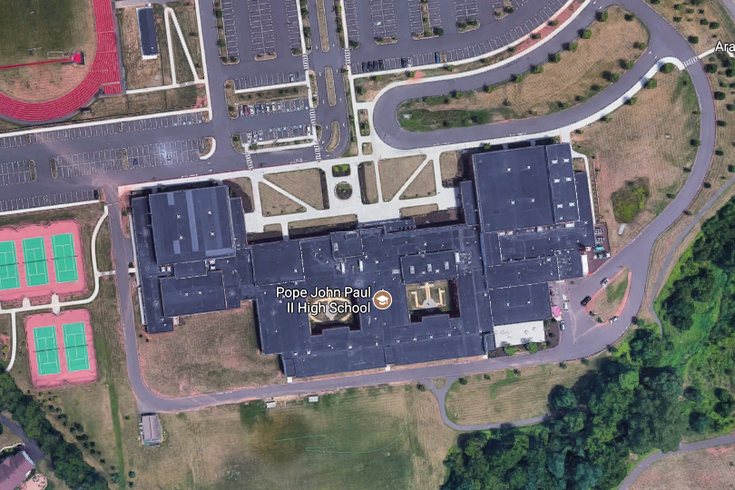 The Archdiocese of Philadelphia is investigating a "racially charged" video that shows students at Pope John Paul II High School huddled around a circle chanting the N-word.

In a statement, spokesman Ken Gavin said the archdiocese is "disheartened and beyond disappointed that young people attending our school would engage in hateful behavior of this nature."

Gavin said the administration at the Royersford, Montgomery County school was made aware of the video on late Monday night, and that it had been shared widely on at least two social media platforms.

The video shows a group of young people huddled around. One person exclaims, "Everybody say (the N-word)," and the other students yell the racial slur together.

"We wish to be abundantly clear with all of you that there is no place for hate, racism or bigotry at Pope John Paul II or any Archdiocesan school," Gavin said. "It is not acceptable under any circumstances or at any time. The use of any racial epithet is inconsistent with our values to treat all people with charity, decency and respect."

The school plans on reaching out to outside groups to start some sort of educational programming in response to the incident, while school officials asked families of students to remind their children they represented the school at all times.

An investigation into the incident is ongoing, and disciplinary action is pending, Gavin said.

After the video was reported, some students at the school spoke out on social media and argued the incident didn't define the student body as a whole, with a few seemingly blaming local news outlets for reporting on the video.

As a student of PJP, I am appalled by these fellow students actions. This is not what we as a school are about. https://t.co/hvOmr6ll3v

PJP isn’t trash. Our school took care of the people who caused the incident

Pjp as a whole is NOT trash. What was done was horrible and absolute trash but a few kids cannot define the whole school, open your eyes ppl

the side of PJPII they don't want you to see https://t.co/Pzo4jrdC1v

I am so proud to leave my house in a Pope uniform every day. Love my school with all my heart. We will come out of this stronger than ever💙💛

As a former student at PJPHS, I would just like to say this: pic.twitter.com/tDDjshwySe

Kinda ridiculous the media is bashing all of Pjp for 10 14 year old kids who attended the school for 2 months. Lol