Philly college hoops roundup: Who will be dancing, who fell short in 2021? 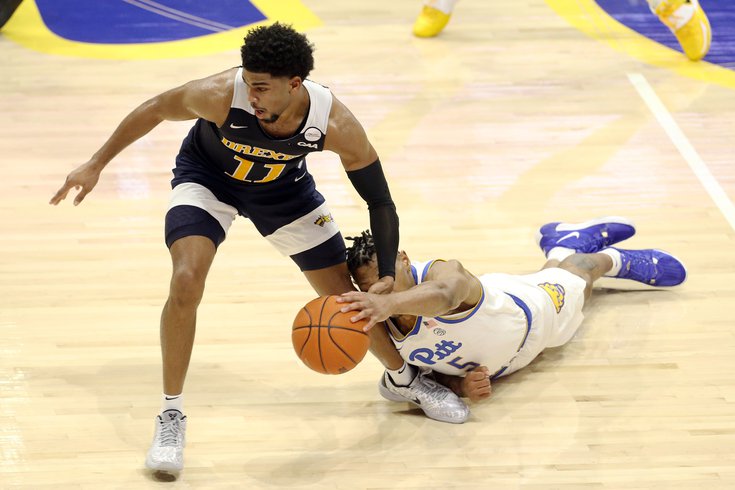 Camren Winter and the Drexel Dragons are looking to be bracket busters next week.

Two City Six mens basketball programs will be dancing and on brackets when Selection Sunday arrives this weekend, while the four others struggled and had disappointing seasons in 2021.

With "March Madness" upon us, many sports fans don't really pay attention until conference tournament time. Which is why we thought it would be helpful to give you a quick overview and season recap for each of the Philly-area schools that play major college ball.

Here's a look at how a weird but memorable season went for Villanova, Drexel, Temple. St. Joe's and La Salle:

Villanova's regular season started as promising as it could — they won 11 of their first 12 games — and has ended on a pretty sour note, as they fell to Georgetown in their first Big East tournament game as the top seed in the conference, a few days after losing their regular season finale to unranked Providence.

Nova lost two of its best players to injury down the stretch, with Colin Gillespie suffering a torn MCL and a relatively serious ankle ailment bothering Justin Moore. These two guards account for the second and third most points per game for any Wildcat, and Jay Wright's squad will need to deal with replacing 27 points per game, more than a third of their scoring if Moore remains sidelined. The early conference tourney setback should slot Villanova as a No. 5 or 6 seed, and their lack of depth could hurt their Final 4 chances. According to Pa.Unibet.com, Nova has a +2000 chance at a title, tied for the 11th best in the nation. They are +400 to make the Final 4.

That's right, the six-seeded Dragons became Cinderellas last week, beating Elon in their conference title game to clinch the Dragon's first berth into the NCAA Tournament in 25 years. The West Philly school has had an up and down season, dealing with more than half a dozen cancelled games due to COVID issues. They entered the CAA tourney having gone 3-5 in their previous eight games and had pretty low expectations.

Drexel is led by junior guard Camren Winter, who scores just under 17 points per game as well as senior forward James Butler, who nabs a double-double nearly every night. They'll be somewhere in the neighborhood of a 15-seed next week when action tips off in Indiana — and will have some tough odds to overcome to win even one game.

The Owls have struggled in the two seasons since Fran Dunphy was replaced by Aaron McKie. This season, they won just four conference games while dealing with a bevy of cancellations and postponements due to COVID. They faltered in the opener of their conference tournament, but are a young team and should come back better in 2021-22.

Like their bitter rivals at Temple, St. Joe's also is transitioning to a new coaching staff after the school parted ways with Phil Martelli. A first round win over Big 5 La Salle opened up their A-10 tournament, which ended a game later with a big loss to UMass. Ryan Daly had 18.5 points per game to pace the Hawks in 2021.

Another storied city program went sub-500 this season, as the Explorers suffered a first round exit to rivals from St. Joes in the A-10 tournament last week. Their offense struggled all year as they did not boast a single double-digit scorer, but they spread minutes around, and will return next year with experience.

The Ivy League had no basketball this winter and spring.