As two little kids in Havertown, Pa., Ryan and Colin Daly only knew basketball through playing one-on-one with a Fisher-Price court at their nana's house. The Daly brothers spent their childhood enamored with the dream of both making it to Big 5 schools, and this year the vision became a reality.

It's literal brotherly love — with some basketball mixed in.

It might be difficult to share the same passion as your sibling, but for these two Delaware County brothers, the game of basketball built a bond — both on and off the court — that will last a lifetime.

“I would be losing my mind sometimes during a high school game, and Colin was always a voice I could listen to because I trusted him with everything in me,” Ryan said.

Ryan, 23-years-old, recently graduated in the fall from St. Joe’s and this will be his final season with the Hawks. Colin, 21-years-old, has another year left in Temple’s program.

The Daly brothers eventually outgrew their Fisher-Price net and made the leap to gymnasiums filled with fans. They started playing organized ball in the third-fourth grade. In a family that’s surrounded by basketball legacies, it was no surprise the boys were destined to get involved at a competitive level. Their father, Brian Daly, played at St. Joe’s and was involved in the coaching scene all throughout the boys' lives.

Ryan and Colin’s former head basketball coach at Archbishop Carroll, Paul Romanczuk, played under Fran Dunphy at the University of Pennsylvania. He also became friends with their father, Brian, once they both started coaching at the high school level.

“We were both guys who played in the Philadelphia Catholic League, played in the Big 5 and were exploring coaching at a young age,” Romanczuk said. “It’s tough to become friends when you’re competing like we were, but we had such a mutual respect for each other.”

Having a father who was a former player and a current coach made the transition from the court at nana's house to crowded gymnasiums that much easier. Loud fans jumping out of their seats and dangling their hands out for every free-throw was a natural environment for Ryan and Colin, who went to every game their dad was coaching.

“Whether it was watching the games or being water boys for the players, they were always on the bench with the team cheering,” Romanczuk said.

As Ryan and Colin got older, deciding where they would play their next four years of high school ball was an important decision, and one that would determine their potential of playing at the collegiate level. Brian was offered an opportunity to coach basketball at Penn State in 2011. The family felt it would be the right decision to move closer to state college for a closer commute.

Tracy Daly, the boys' mother, made the sacrifice to drive both Ryan and Colin, back and forth three hours every weekend, so the two could play basketball in Philadelphia. During those long car rides, Ryan and Colin would mess with each other, but also spend their time talking — not just about basketball, but video games and football.

While moving to a new home and school is a difficult transition within itself, the two always had each other. As time went on, both parents decided State College wasn’t the right fit for the boys, and they wanted to get the Philadelphia Catholic League experience.

“They reached out to me, because they wanted their kids back in the Philadelphia area and to play at Archbishop Carroll,” Romanczuk said. “Even if it meant Brian staying behind to coach and the family moving back to their home in Havertown.” 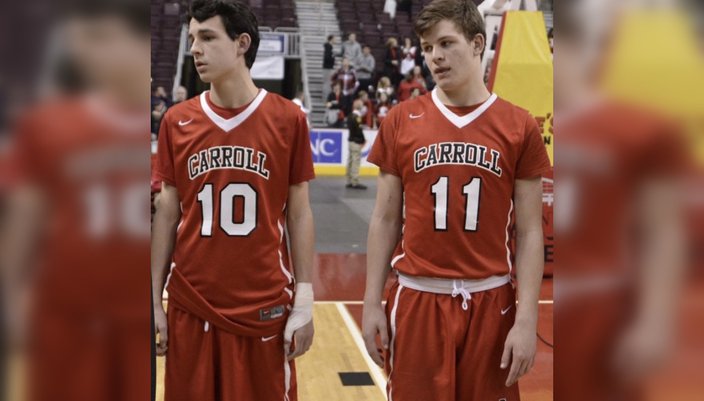 From kids in Havertown to rivals playing D-1 basketball, Ryan and Colin Daly are the definition of Philadelphia's brotherly love.

At Archbishop John Carroll, Ryan would come out fired up on the court while Colin played the role of peacekeeper. The two different types of personalities actually meshed with one another. Colin would spread the floor out, providing easier opportunities for Ryan to drive into the paint.

The brothers played on the same varsity team in 11th and 12th grades. During the 2015-16 season at Carroll, the two had a tremendous year, finishing 23-2 overall and 12-2 in conference play, good for third in the league. Ryan, always the big brother, was harder on Colin than other teammates when he messed up, but it still built Colin's confidence and helped him become a better player.

Colin considers himself to be more reserved, especially when compared to Ryan, and it took his older brother telling him to shoot the ball to help him gain confidence on the court.

“There was one game against Archbishop Wood, we were down by four with about a minute left, and Colin came in. Hit two threes and got us to overtime,” Ryan said. “We ended up winning 77-70, and that’s what got us to the Palestra.”

Sibling rivalries can be a common case in most family households.

Even for these two loving brothers, one-on-one in the driveway would lead to an all-out physical brawl by the end. Ryan is very competitive and at times when he didn’t think Colin was practicing hard enough, he would get into arguments with Colin after practice at home. Although some fights got to the point where their brother’s parents had to separate the two, that was Ryan’s way of showing he cared for his little brother, he added.

“It could be in anything we do — who could run up the steps faster or who could put their seat belt on faster,” Ryan said. “Colin and I competed our whole life and growing up basketball-wise we were always going at each other, but it only made us better.”

The COVID-19 pandemic put a sudden halt to the brothers' chances of facing off in the Big 5 this season. St. Joe’s and Temple are both rival schools who usually play once a season, but the teams will not compete this season, since conference play takes priority over non-conference games.

Ryan finished the 2019-20 season with the Hawks averaging 19.3 points and nine rebounds per game. He knew he needed to maintain his workouts to be in better shape for his last season — and due to COVID, there was no typical college preseason and training camp. Colin wanted to see Ryan go as far as he can with basketball, so Colin became his workout partner and coach.

The boys would wake up in the morning and begin their day with a run, and end their day on the court, where Colin always offered to rebound for his older brother. They also picked up boxing, which the two enjoy since it was another way for them to compete with each other.

As the brothers finish up their collegiate career, Ryan is looking to play at the professional level, whether that be in the NBA, the G league, or abroad. Colin hopes to learn as much he can at Temple, to then head into the coaching scene after his final year — just like his father and grandfather.

“We are completely different but as close as can be," Ryan said. "That’s my best friend and I got really lucky to have someone like Colin to grow up with throughout all these years."

Isabella DiAmore is a junior journalism major studying at Temple University. She is currently the assistant sports editor for The Temple News.