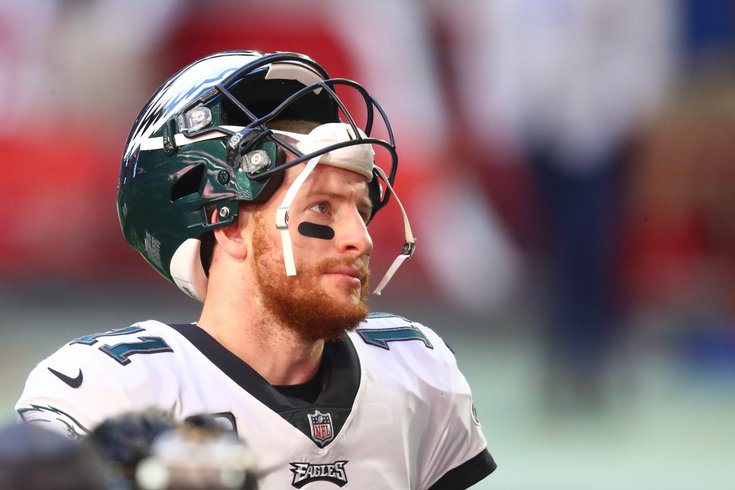 Eagles fans have taken to social media to express shock, disapproval and anger over the impending trade of quarterback Carson Wentz.

Carson Wentz is still on the Eagles' roster, but those days appear to be coming to an end.

The 28-year-old quarterback is expected to be traded out of Philadelphia as early as this week after five seasons with the organization, according to multiple reports.

Wentz played at an MVP level in 2017, but a torn ACL forced him to watch the Eagles' Super Bowl run from the sideline. He came back strong in 2018 and signed a four-year contract extension prior to the 2019 season. But his play faltered in 2020 to the point that he was benched in favor of rookie Jalen Hurts.

With the Wentz era appearing to be over, Eagles fans and media members are bidding the former franchise quarterback farewell on social media.

Many believe that trading Wentz is the right move for the franchise, but others are just stunned that a trade is imminent.

2020 was a really down year for Carson Wentz. He still had some (really) cool plays, tho.

So I put together a thread of some of my favorites from the season.


As an Eagles fan, I really didn’t want to move on from Carson Wentz this season. I wanted to give him another chance with a healthy roster next season.


Anyone else kinda sad knowing Carson Wentz probably won’t be an Eagle at the end of the week?


If the Eagles trade Carson Wentz, I really don’t know what I’ll do.

I can’t imagine giving up on a guy who got us in position to win a Super Bowl.

I can’t imagine giving up on a guy who drug a lifeless team to the playoffs in ‘19.

I’m ready to be disappointed...


Still hard for me to fathom exactly how it got to this. https://t.co/wwzdjGPoYT

A parody LinkedIn account also emerged among the social media reactions. The fake Wentz account lists the Eagles as his employer, but lists his job title as "Backup Quarterback." It also states that he is open to work, specifically "Professional Football Player roles."

The "About" section reads as follows:

Hello. I was the starting quarterback for the Philadelphia Eagles of the NFL. In 64 career games, I had 54 fumbles and 46 interceptions. That got me the nickname "Turnover Machine." My other nicknames were "China Doll" and “Sack." My best friend is the Lord and my enemies are Jalen Hurts and Nick Foles.

I am actively searching for a new position as starting QB in the NFL. I am open to the Canadian Football League (CFL) as well as long as I am the starter.

The "Featured" section includes two videos. The first is of Wentz singing the Veggie Tales theme song in the Eagles locker room. The second video comes from the 2019 season, when Wentz overthrew a wide-open Miles Sanders for what would have been a walk-in touchdown against the Seattle Seahawks.

Among the other LinkedIn accounts he follows on the social network platform: the Eagles, North Dakota State University and the Indianapolis Colts — one of the teams reportedly in the market for the former All-Pro quarterback.

Wentz was picked by the Eagles with the No. 2 overall pick in the 2016 NFL Draft. But it doesn't appear that his exit from Philly will be as celebrated as his entrance.