The demolition process will begin next week; structure's cast-iron facade will be partly preserved 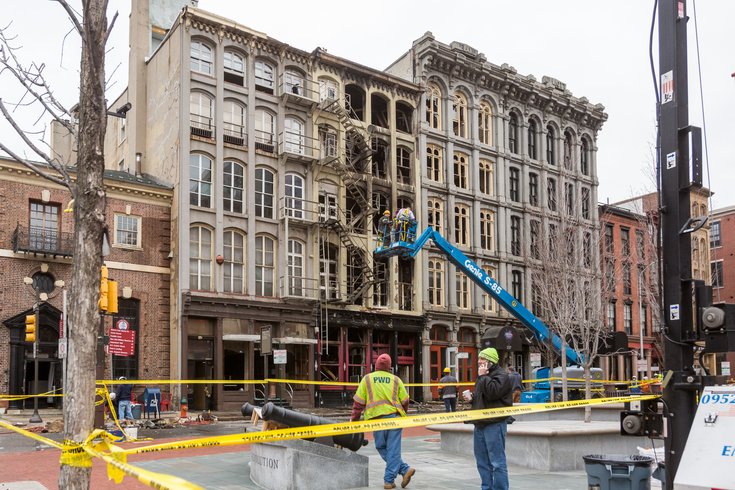 This is the aftermath of a four-alarm fire on the 200 block of Chestnut Street in Old City, Philadelphia as it appeared Monday, Feb. 19, 2018. The fire occurred in the early morning hours Sunday and displaced about 160 residents and hotel guests in those buildings.

A building that caught fire on Sunday in Philadelphia's Old City neighborhood will be demolished, the Department of Licenses and Inspections announced on Friday.

The demolition process will begin next week and is expected to take at least one week to complete.

The building, located at 239 Chestnut St., caught fire early Sunday morning, causing 160 people to be evacuated from the area, including guests Best Western Plus Independence Park Hotel. No people were killed, but 13 animals died in the four-alarm blaze, which damaged neighboring buildings.

L&I determined the structure was "imminently dangerous." Nearly the entire building was destroyed in the fire, but much of the Chestnut Street facade remains standing, though it is considered unstable.

The brownstone construction beneath the plaster-covered facade was severely deteriorated and cannot be salvaged, according to an L&I inspection team that included engineers from Keast & Hood and O'donnell and Nacarrato.

The first-floor facade will be saved, because it is made from cast iron and poured into molds. Langan, an engineering and consulting firm, is performing a 3D laser survey of the building's facade.

"By fully documenting the structure's exact dimensions and detailing," L&I Commissioner David Perri said in a statement, "This survey will be instrumental in informing an appropriate design for reconstruction of 239 Chestnut Street."

Before the demolition can take place, a neighboring building – 237 Chestnut St. – must be stabilized to avoid further damage to its structure. Its owner has begun preparing the building for the needed shoring work, according to L&I.

Much of the area surrounding the fire remains closed to traffic.

The cause of the fire, which began on the sixth floor, is still under investigation.